Every Friday, James Blevins, the Gazette’s in-house reporter and poet—who has seen his work previously published in “Salt Hill Journal,” “Pretty Owl Poetry,” “Stoneboat Journal,” “Mud Season Review” and “AZURE,” as well as numerous other outlets both online and in print—chooses one poem for publication.

Now close the windows and hush all the fields;

If the trees must, let them silently toss;

No bird is singing now, and if there is,

Be it my loss.

It will be long ere the marshes resume,

It will be long ere the earliest bird:

So close the windows and not hear the wind, 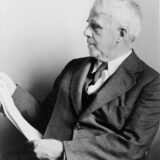 Robert Frost, one of the most celebrated figures in American poetry, was born in San Francisco in 1874. He was the author of numerous poetry collections, including New Hampshire (Henry Holt and Company, 1923), which won the Pulitzer Prize for Poetry in 1924, his first of four such awards, the most of any poet in history. Frost died in Boston in 1963.