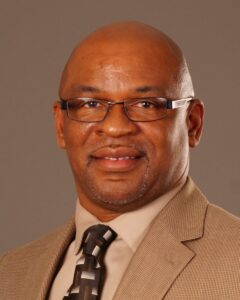 In a historical moment, the Florida High School Athletic Association Board of Directors voted unanimously to name Craig Damon as FHSAA executive director elect on April 23.

Damon, a 1987 graduate of North Marion High School who served in multiple roles at his alma mater, will become the 11th executive director of the association and the first Black person to hold the position. He is set to replace FHSAA Executive Director George Tomyn, who is retiring after five years of service.

“I am very excited and very grateful for the opportunity,” Damon told the “Gazette” last week. “Ever since I got into education back in 1993, I have always wanted to have an impact on students, and now I can at the highest level in the state.”

Collectively, Damon has 29 years of experience in interscholastic athletics. He has been an FHSAA staff member since 2013, where he started as a director of Athletics before being promoted to associate executive director of Eligibility & Compliance.

“The board followed a guided process to hire an exceptional candidate,” said Dodd in an FHSAA press release. “From the application process through the final interviews, board members worked diligently to select a well-qualified and experienced candidate in Craig Damon.”

“I am confident he will continue to advance [the FHSAA] in the years to come and serve our student-athletes well,” he added.

Prior to his tenure with the FHSAA, Damon served as a dean, athletic director, teacher and coach at North Marion High School in his hometown of Ocala. He graduated from North Marion in 1987.

One of the biggest issues Damon said he would like to tackle coming into his position would be the general disconnect between the association and state schools after a devastating two years of COVID-19.

“We had to cancel sports in the spring of 2020. We started schools back up, started sports back up, but not everyone could start back. Some started at different times. We need face-to-face interaction with folks again. I’m looking forward to that challenge of reconnecting with our membership,” he said.

Damon said growing up in Marion County has taught him gratitude for the coaches, teachers, and mentors who have guided him in the right directions since he was a child. It was a gift, he explained, one he doesn’t take for granted as he takes on his new role at the FHSAA.

“My challenge is to take the gift I was given and use it to impact more people in a positive way and on a larger scale,” he said.

When asked about North Marion’s well-known motto “NorthSide Pride,” Damon credited it as something he learned early in life as a North Marion Colt, and something he still carries with him to this day.

“Growing up in those small communities,” said Damon, before pausing for a moment: “We can be mad at each other one day, but if something were to happen to you, we’d drop everything we’re doing to help you and make sure you’re taken care of. That’s NorthSide Pride.”

“Doesn’t matter what race you are or whatever,” he added. “When someone in the community is down, the community picks you back up. I carry NorthSide Pride with me to this day.”