School board changes time for one of two monthly meetings 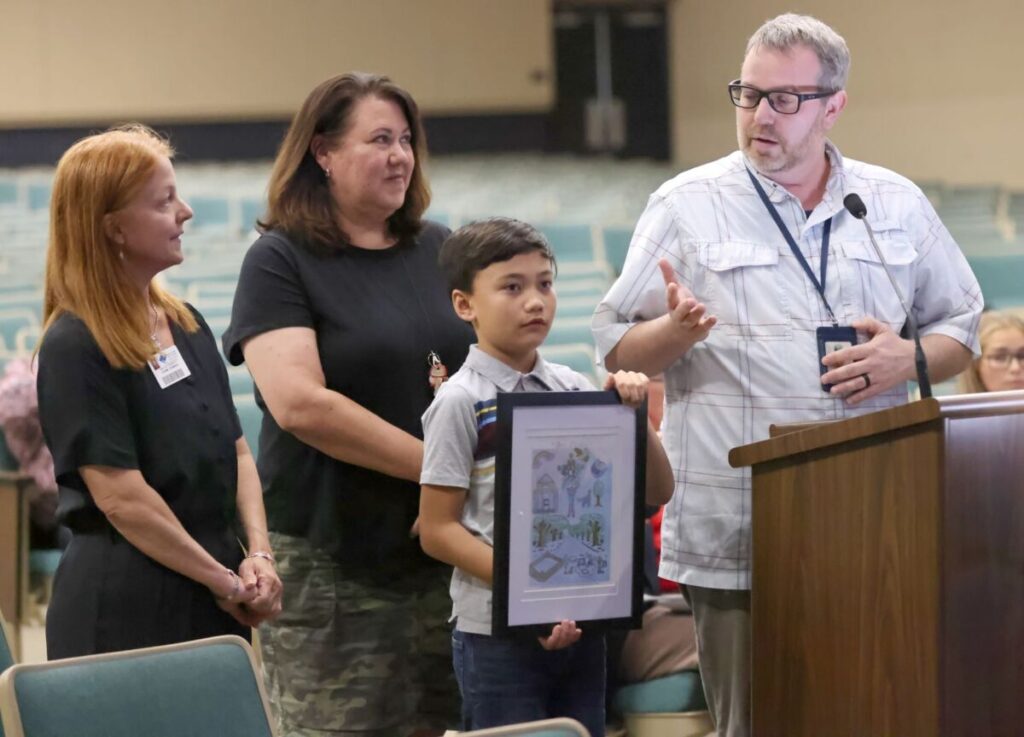 Davey Pebley, 10, a fourth grade student at Eighth Street Elementary School, second from right, is recognized for his artwork “One Ocala,” which was the REACH Poster Contest winner, by John Spencer of the City of Ocala Recreation and Parks Department, right, as his Pebley’s art teacher, Jeanne Baines, second from left, and Joanne Crowder of Marion County Public Schools, left, listen during a meeting of the Marion County Public School Board at the MTI auditorium in Ocala, Fla. on Tuesday, April 26, 2022. [Bruce Ackerman/Ocala Gazette] 2022.

The Marion County School Board passed a motion with a 4-1 vote on Tuesday to change the time of one of their two monthly school board meetings to 9 a.m.

The other of the two meetings, which occur on the second and fourth Tuesdays of the month, will proceed at 5:30 p.m. at the traditionally scheduled time. The change will occur on a trial basis from June 28 until Sep. 27 and will be implemented to make the meetings more accessible for public attendance.

“Traditionally we have had a large segment of the population denied access to participate in our meetings in person because of their work schedules,” said School Board Member Nancy Thrower. “Not everybody works a traditional schedule, especially as our community continues to grow. We have a lot of people that are in careers that would be available in the mornings.”

The discussion was a result of an amendment to Agenda Item D20.1, which suggested either moving both meetings to the morning or retaining the previous schedule. Board members Thrower, King, Campbell and Cummings agreed to compromise by creating and passing a motion based on the discussion that might better provide different opportunities for members of the public who may have non-traditional work schedules to attend meetings.

The evening meeting time will remain the same so that students and staff of Marion County Public Schools will have the opportunity to attend board proceedings after normal school hours. Board meetings may still occur outside of the regularly scheduled bi-monthly instances, provided that the board gives proper notice to the public.

“In the end, it’s still very important to have that face-to-face contact provided for each and every citizen at an equal level,” Thrower said.