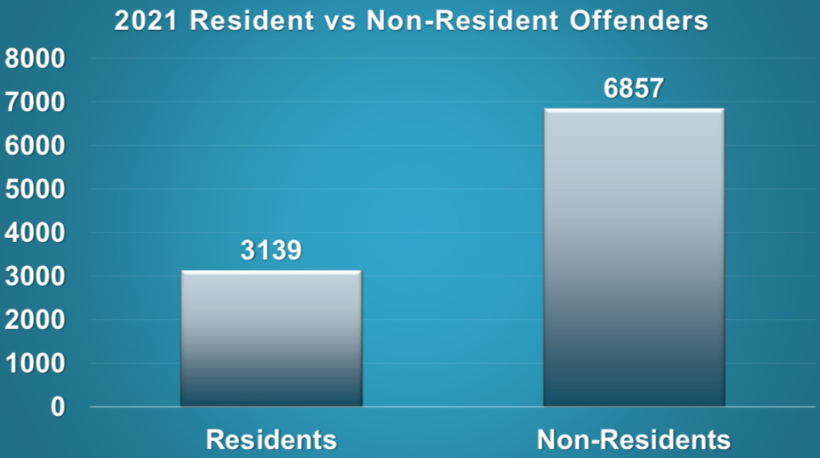 When it comes to understanding why his officers arrest a disproportionate number of nonresidents, Ocala Police Department (OPD) Chief Mike Balken said it helps to think of the city as an island, surrounded on all sides by an ocean of visitors.

Unlike Port Orange or South Daytona, cities of similar size, Ocala is more isolated within a rural setting, Balken explained to the Gazette on April 7, with fewer metro areas close enough to diffuse some of the ever-in-motion nonresidential population coming to and from the city.

“This population will ingress and egress through Ocala in the hundreds of thousands for work and entertainment every single day, day and night,” he added. “For example, I live in the county myself with my wife and two kids, and almost everything we do is in the city limits as well.”

Because of this constant flow of visitors, Balken said, the OPD arrests a disproportionate number of nonresidents, or those with addresses listed outside the city limits. According to OPD statistics, the city reported 6,857 nonresident offenders in 2021 alone, more than double the number of resident offenders (3,139) during the same 12-month period.

“We are policing a much larger population than what is on paper,” said Balken. “That’s a hard thing to understand. But Ocala is different because we’re extremely rural outside of Ocala proper, but (Marion) is the fifth largest county (by area) in the state.”

The U.S. Census Bureau put Ocala’s population at 59,267 as of 2019. But according to estimates made by the Ocala Metro Chamber & Economic Partnership (CEP), the daytime population of Ocala includes roughly 250,000 people bustling about.

From Balken’s point of view, the department is policing a massive, fluid population that is always on the move, evolving and growing every year, and that includes after the sun goes down.

Comparatively, OPD staffs for a daytime population of 63,000 people, said Balken, with 3.1 police officers per every 1,000 citizens—higher than the state average at 2.36.

Ocala’s 2020 crime rate at 3.78 is also higher than Florida’s average at 2.55. (Dividing the number of reported crimes by the total population and then multiplying that number by 100,000 is how one calculates a crime rate, according to the Florida Department of Law Enforcement.)

Balken said city police departments across the nation used to base staffing primarily on a city’s population per capita, which he believes is grossly inefficient.

He said, “[If that were done today,] we would have up to 1.5 cops per 1,000 people. That makes no sense. [Thankfully,] law enforcement officials realized this [didn’t work] decades ago.”

In comparison to similar-sized cities in the state, Ocala arrested 1,012 people in 2020 for either rape, robbery, aggravated assault, burglary, larceny or motor vehicle theft, a significant amount more than Delray Beach (370), Jupiter (225), North Miami (329), Port Orange (214) and Sanford (341) for the same crimes, according to FDLE statistics provided by the OPD.

Clearance figures are presented two ways, as “clearance by arrest or exception and clearance by age of offender,” according to the FDLE.

To read what Chief Balken said on the opioid crisis and his idea for a new four-quadrant patrol structure in the city, click the respective hyperlink.