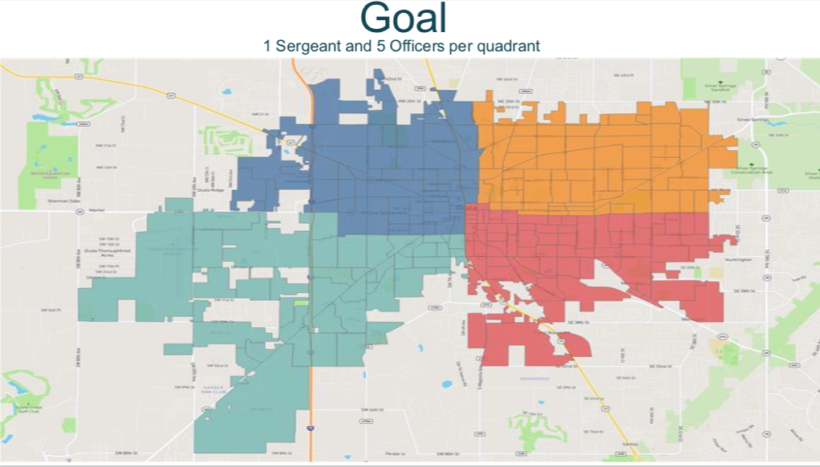 Currently, Ocala is split into two districts for policing, said Balken, with each district having a district office located within the community. Ocala Police Department (OPD) headquarters, at 402 S. Pine Ave., houses administration and major crimes units (including those handling murder, robbery and arson cases).

“It worked well back in 1994, when I was a young cop,” explained Balken, “working under seasoned veterans with lots of life skills and history to draw from. But things have changed. Law enforcement has changed. Now a very young sergeant isn’t just supervising one new guy, but four or five new guys.”

Overall, it takes the OPD a total of 13 months to hire and properly train a new hire before that officer is ready to work independently in the field. Hiring new police officers takes two months, followed by six months in the police academy. Then it takes another month for department orientation/high liability training and four months for field training.

With experience levels at a premium, Balken’s goal is to lower the span of control down a couple of pegs—ideally, five officers under one sergeant—spread over the four quadrants.

By spreading things out in smaller quadrants and shrinking squads, Balkan hopes to create a system of higher accountability as well.

“Each quadrant (team) is accountable for the crime that occurs there,” said Balken. “It’ll get us back to making closer ties with our community policing as well, targeting smaller locations better and understanding what’s going on in that particular neighborhood, who the bad people are. It just creates an atmosphere of better dialogue between the police and the citizens.”

“The city has grown,” he added. “And as an agency, we need to grow our approach to policing, too, and keep up with it.”

For the fiscal year 2021/2022, the OPD’s operating budget is $37.6 million, according to Public Information Officer Jeff Walczak.

Presently, OPD has a total workforce of 315 employees, including 194 who are sworn law enforcement personnel. The four-quadrant patrol structure will add an additional 11 sworn police officers (six sergeants and five officers), with an overall implementation cost of approximately $2.2 million, said Walczak.

“Refining our current two-district patrol structure to four quadrants will add six sergeants and five officers to our Community Policing Bureau,” he added. “This will improve our service to the community, to include crime deterrence and greater efficiency in response times.”

Sworn Requests (involving the swearing in of new officers):

To read what Chief Balken said on non-resident offenders and the opioid crisis, click the respective hyperlink.