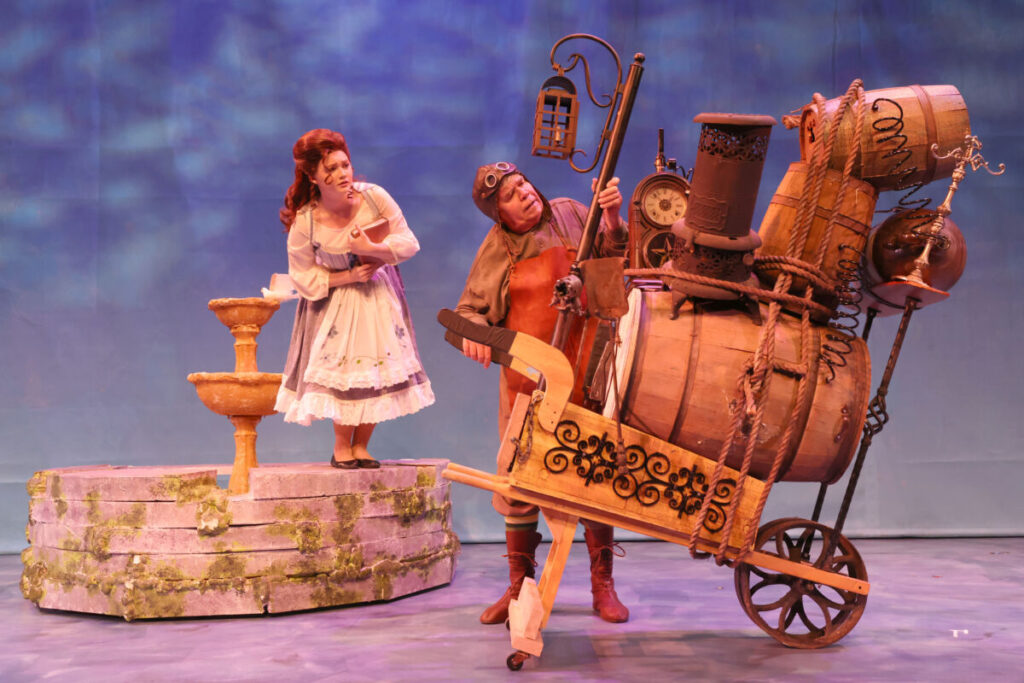 Adrienne Hebert, as Belle, left, and Wayne T. Dilts as Maurice, right, rehearse a scene from Beauty And The Beast at the Ocala Civic Theatre on East Silver Springs Boulevard in Ocala on May 9. [Bruce Ackerman/Ocala Gazette] 2022.

Based on the beloved 1991 Disney film, the Ocala Civic Theatre (OCT) presents its latest production, “Beauty and the Beast,” starting this week and running through to June 5.

Directed and choreographed by Katrina Ploof, the “tale as old as time” is brought to vivid life in a spectacular stage version that includes all the songs from the movie plus half a dozen new hits written for the 1994 Broadway musical.

Ploof, Music Director Philip King and Assistant Choreographer Sarah Ganey combine their skills to adapt the original Broadway production, which had music by Alan Menken, lyrics by Howard Ashman and Tim Rice, book by Linda Woolverton and was originally directed by Jess Roth.

Eryn Brooks Brewer designed the costumes for the OCT production. During casting calls earlier in the year, actors were warned that many of the costumes and makeup were heavy, awkward and hot, advising potential cast members that they would need to be able to lift or carry 15-20 lbs. for extended periods of time. 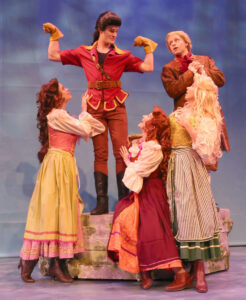 Ainsley Harker as Silly Girl #3, Caleb Spivey as Gaston, Megan Wager as Silly Girl #1, Joel Hunt as LeFou, and McKenzie Todd as Silly Girl #2, left to right, rehearse a scene from Beauty And The Beast at the Ocala Civic Theatre on East Silver Springs Boulevard in Ocala on May 9. [Bruce Ackerman/Ocala Gazette] 2022.

In conjunction with the OCT’s production of “Beauty and the Beast,” the College of Central Florida’s Appleton Museum of Art is presenting “Finding Beauty,” an exhibition which will display many of the ornate costumes that Brewer designed for the show alongside the pieces in the Appleton’s permanent collection that inspired them.

“Finding Beauty” runs through to January 15, 2022. Ticketholders to “Beauty and the Beast” are permitted one visit to the exhibition free of charge. For more information, visit www.appletonmuseum.org.