Mario, Elkin, Alvaro and Eric Natera opened the MAE Brewing Co. together just before the pandemic struck in 2020 and their business has survived—and thrived—to tell the tale. 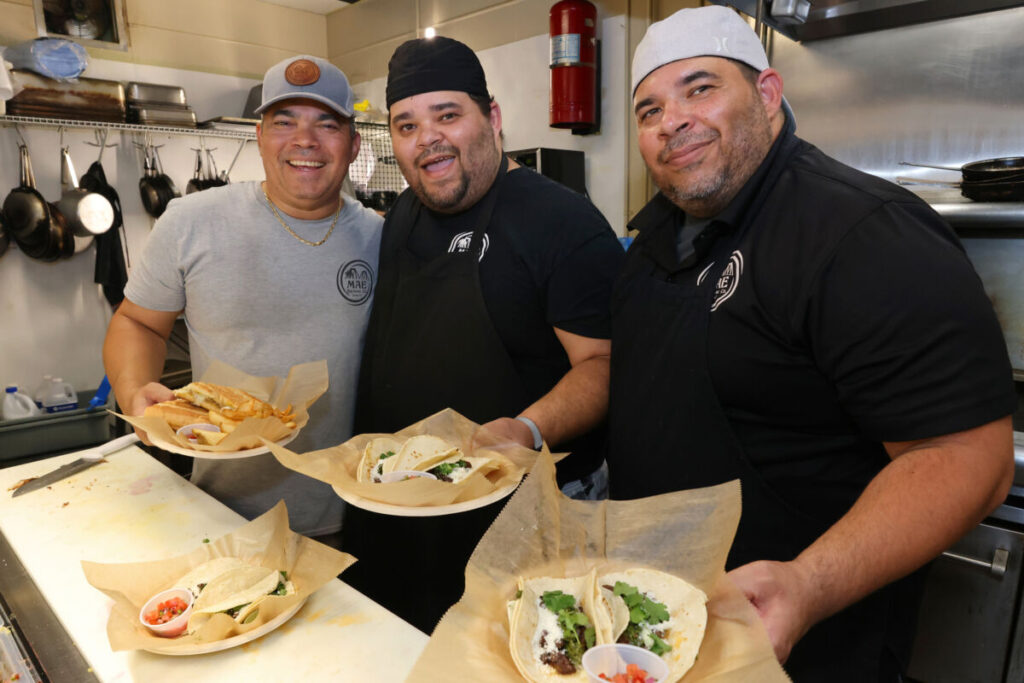 Brothers Mario, Alvaro and Elkin Natera, left to right, show off their freshly prepared steak tacos and a Cuban sandwich in the kitchen at MAE Brewing Co. in Six Gun Plaza on East Silver Springs Boulevard in Ocala on Tuesday, May 10, 2022. [Bruce Ackerman/Ocala Gazette] 2022.

When the Natera brothers—Mario, Elkin, Alvaro and Eric—first opened the MAE Brewing Co. in November of 2019, they couldn’t have known the chaos and uncertainty that was coming in just four short months. Nor could they have foreseen that it would last for a further two years.

The COVID-19 pandemic challenged the four brothers and their newly opened business, but it also proved to be a miracle in disguise, helping to guide the Nateras to their current business model and the brewery’s growing success amongst a loyal Ocala customer base.

“It’s been harder than we thought because of the pandemic,” admitted Mario Natera, “but we’re still fighting. We’re still trying to get to the point we wanted to be at from the beginning.”

The Natera brothers grew up on the northeast coast of Colombia before immigrating to the United States 25 years ago. They came to their new home country already dreaming of opening and running a business.

Mario, the eldest at 50, is a chemical engineer. He has been brewing beers for years, including making wine, since before he left Colombia. It just made sense, said Elkin Natera, 42, for the brothers to get involved with beer and open a brewery—the first business the four of them have ever opened together.

“Basically, our combined experience working in restaurants, it’s probably more than 56 years total between all of us,” Elkin said.

MAE is an acronym, using the first initials of all four of the brothers’ first names. It is pronounced differently, though, in honor of one of their dear uncles, Miguel, who went by Mike, but, due to their strong Colombian accents growing up, the brothers called him their “Uncle My” instead of “Uncle Mike,” hence the slightly different pronunciation of the three letters in their business name.

To the brothers, the name may not be all that catchy, they admitted, or easy to pronounce, but it holds a deeper meaning much closer to the company’s soul than anything else: a company founded on family and cultural heritage.

“Our name has a story and meaning on its own,” said Mario. “It really represents who we are and where we come from and what matters to us.”

Initially, MAE, located at 4901 E. Silver Springs Blvd., Suite 503, Six Gun Plaza, in Ocala, only offered tapas and a taproom, with a goal to open their brewery as soon as they purchased all the equipment they needed.

Then, March 2020 happened. They shut down for several weeks before reopening on Cinco de Mayo roughly two months later in a limited capacity.

The nascent business began to lose employees left and right after that, both up front and back in the kitchen. This forced the brothers to jump in and fill all the roles left vacant in order to keep the business going.

“Right now, the three of us are in the kitchen,” said Mario, “and I’m part time in the brewery. We also work up front, waiting on customers. We’re all over the place.”

To keep the business afloat, the brothers had to rethink their original business model to meet the moment they found themselves in. The brothers had to lean on their restaurant background and cooking skills, offering a full menu of food and curbside pickup.

“We stopped the brewery for a while. The food menu grew, which we didn’t expect at the beginning that we would do that,” said Mario. “But it ended up that [our food and beer were] complimenting each other really well, and I think it was for the best of our business that we did that.” 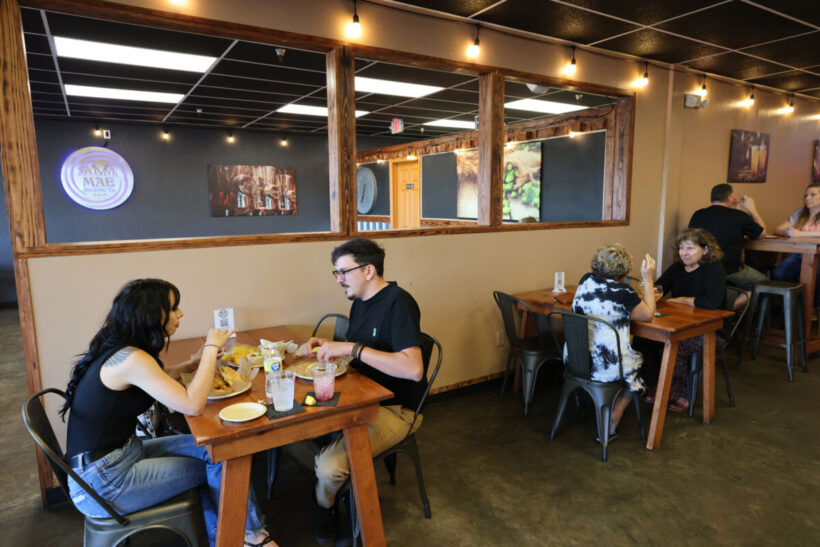 “We had the idea of having like maybe six or seven appetizers for people that was coming here to have beers,” added Elkin. “But by growing our food menu, it like totally changed us into more of a restaurant than a brewery at that point.”

Though not in their original plans, the food menu, coupled with their beer (the brewery eventually reopened last year), has helped create some buzz around MAE, Mario said. They have even expanded, purchasing the unit next to theirs in January of 2021, increasing dining space, with plans for more expansion down the road.

“We still got time. It’s in the back of our heads,” he said about buying another unit in Six Gun Plaza for future expansion of their brewery space.

What truly separates MAE from other breweries in town, said Elkin, is the Latin American-themed twist they bring to their food menu: gourmet burgers from Mexico, Argentina and, of course, Colombia.

“It compliments the beer,” Elkin added. “And the beer, I don’t have to say this just because my brother makes it but it’s the best beer you will ever taste.”

Going forward, the Natera brothers would like to open a total of three locations one day, all while recognizing the challenge that goal represents. The pandemic slowed them down, changed some plans but never took away their spirit or ambitions.

Much of that, Mario and Elkin both agreed, is largely due to their loyal customer base who have helped the newborn company survive a time that tested a lot of small businesses—with many not lasting long enough to tell the tale.

“Our customers have always been there for us,” said Elkin. “We got a good following and we’re very thankful for that. But it took a lot of sweat and hard work to make this business happen. Me and my brothers, we really pushed through that time and it wasn’t easy.”