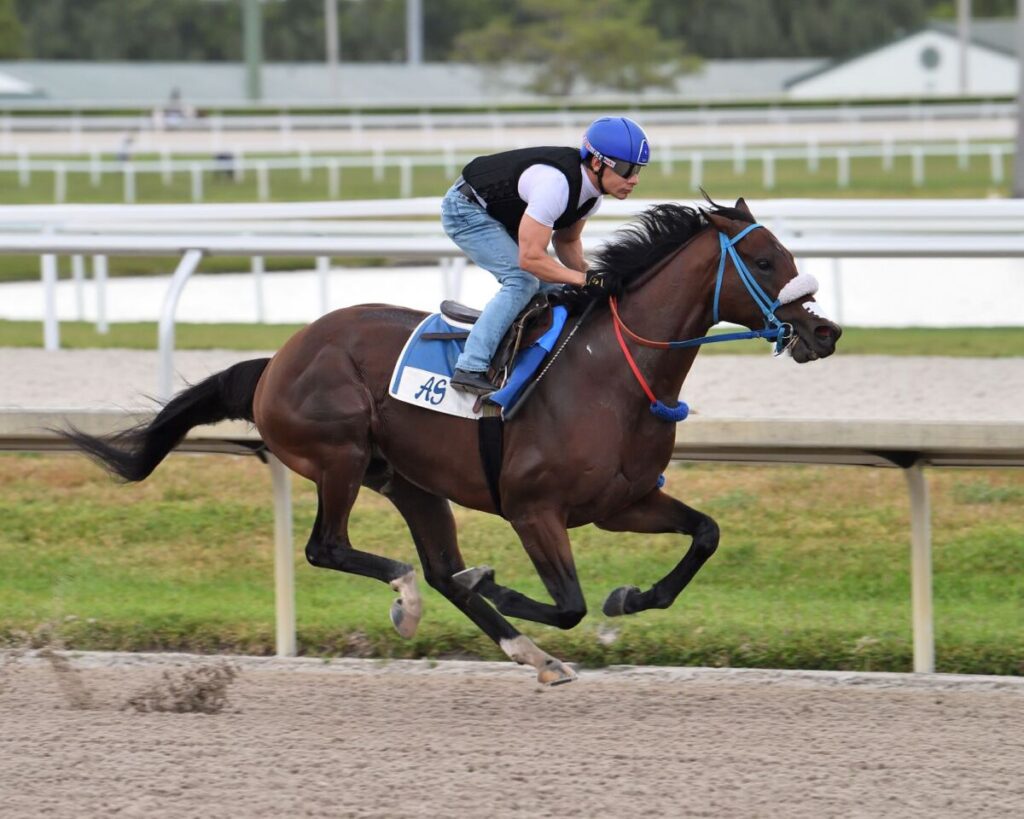 The $3 million Kentucky Derby (G1)—”the most exciting two minutes in sports” and the first leg of the Triple Crown—will be run for the 148th time on Saturday, May 7, at Churchill Downs in Louisville, Ky. With an intriguing and competitive full field of 20 runners primed to run the race of their lives over 1 ¼ miles, the Sunshine State’s Derby dreams rest on the shoulders of Simplification, the lone Florida-bred in this year’s race.

Owned by Ocala/Marion County’s Tami Bobo and Tristan de Meric and trained by Antonio Sano, Simplification drew post position No. 13 at Monday’s draw, and the son of Kentucky stallion Not This Time is listed of odds of 20-1 on the morning line. Bred by France and Irwin Weiner, Simplification is produced from the Candy Ride (ARG) mare Simply Confection, and he will be ridden by jockey Jose Ortiz, who has been aboard the colt in his last two races.

Sano expressed confidence in his charge’s post position, saying on Tuesday, “The 13 is perfect, a little outside and toward the middle. I didn’t want to be inside.”

Following Simplification’s five-furlong breeze in a fast :59 2/5 on April 22 at Gulfstream Park, Sano said of the workout, “I’m so happy. The work was impressive. He did it very handily, very easy. I am 100 percent confident in my horse. I know the race is very strong, but I’m confident in the horse.”

Simplification will attempt to become the first Florida-bred since Silver Charm in 1997 to win the Kentucky Derby and the seventh overall. In addition to the six Florida-bred Derby winners—Silver Charm (1997), Unbridled (1990), Affirmed (1978), Foolish Pleasure (1975), Carry Back (1961), and Needles (1956)—Florida also boasts a Triple Crown winner in Harbor View Farm’s Affirmed, who swept the Kentucky Derby, the Preakness Stakes (G1), and the Belmont Stakes (G1) in 1978.

Florida-bred Medina Spirit, who died following a training session at Santa Anita in December, crossed the wire first in last year’s Derby for trainer Bob Baffert and owner Zedan Racing Stables but his win was short lived. He was subsequently disqualified for testing positive for the banned race-day substance betamethasone.

Poised to end Florida’s drought, Simplification enters the Derby after a productive season of prep races. He was all business in his seasonal debut on Jan. 1, winning the Mucho Macho Man Stakes at Gulfstream Park by four dominating lengths. He was runner-up to fellow Derby contender White Abarrio in the Holy Bull Stakes (G3) in February and was third behind that rival again in the Florida Derby (G1) on April 2. Sandwiched between those two efforts was an impressive 3 ½-length victory in the Fountain of Youth Stakes (G2) in March after closing from last to win going away.

Regardless of whether or not her horse is draped in a lush blanket of roses at the end of the race, Bobo is grateful for the experience.

“I feel very blessed and honored to be in this situation,” said Tami Bobo. “I am truly gratified to be a part of this horse’s path. I feel like I am a spectator in the world of what Simplification has to offer us going forward.

“I think the horse is full of talent, and it’s been a blessing to be part of his career and to watch him develop,” Bobo continued. “I just hope he can run his race. This is a tough field of horses, and it is anyone’s race. I think at the end of the day, we all know it’s the Kentucky Derby and the horsemen know it’s going to go to the horse that gets the best trip on the day. There are a lot of talented 3-year-olds in this race, and just to be a part of the best 20 3-year-olds in the world is a blessing for all of us in the race. I hope everyone has a safe trip and we all come out on the other end to race another day.”

Ocala Breeders’ Sales Company will be represented in the Derby by the aforementioned White Abarrio, who went through the ring twice at OBS. He first sold through Summerfield Sales (Francis and Barbara Vanlangendonck) at the 2020 Winter Mixed Sale for $7,500 and then was a $40,000 graduate of last year’s OBS March Sale where he was consigned by Nice and Easy Thoroughbreds. Racing for C2 Racing Stable and La Milagros, White Abarrio has won four of five starts and has banked $823,650. Third in last year’s Kentucky Jockey Club Stakes (G2) at Churchill Downs, the flashy gray or roan son of Race Day won the Holy Bull Stakes by 4 ½ lengths and captured the Florida Derby in his most recent start for trainer Saffie Joseph Jr.

Trainer Todd Pletcher, who has ties to Ocala through his father J.J. Pletcher’s Payton Training Center and his stepmother’s Joan Pletcher Real Estate, will saddle three horses—Mo Donegal, Charge It (a Kentucky homebred for Mandy Pope’s Florida-based Whisper Hill Farm), and Pioneer of Medina. Pletcher is in pursuit of his third Kentucky Derby victory after winning the roses with Super Saver in 2010 and with Always Dreaming in 2017. Mo Donegal drew the rail; Charge It will break from post position No. 8; and Pioneer of Medina is in post position No. 11.

“I think the new gate (which brings the inside horses farther off the rail) should work to Mo Donegal’s advantage,” said Todd Pletcher earlier this week. “He’s got some experience in there; he just won the Wood Memorial from the one hole. He’s used to having dirt in his face, and I’d hope that Irad (Ortiz) could save some ground around that first turn and get us in a good spot. He’s one of the few horses in my barn that I think could handle a spot like that. The other two—Charge It and Pioneer of Medina—I’m happy with their posts.”

The top two favorites on the morning line are Zandon (3-1), who will start from post position No. 10, and Epicenter (7-2), who drew post position No. 3. Zandon, a son of Upstart bred by former Kentucky Governor Brereton C. Jones., hails from the barn of New York-based trainer Chad Brown and is owned by Jeff Drown. Flavien Prat has the mount abord the colt who won the Blue Grass Stakes (G1) at Keeneland on April 9, weaving his way through traffic to score going away.

“I wanted him to draw toward the middle of the starting gate and we got just that,” Brown said. “Training wise, we’ve done most of our serious work and he’s fit for Saturday”

Epicenter, like Simplification, is a son of Not This Time, last year’s leading Second-Crop Sire and this year’s leading Third-Crop Sire. Campaigned by Winchell Thoroughbreds and trained by Steve Asmussen, Epicenter won the Louisiana Derby (G1) and the Risen Star Stakes (G2) at Fair Grounds this year and captured the Gun Runner Stakes last year at two after breaking his maiden at Churchill Downs in November. Joel Rosario, who has been about Epicenter in four of his six lifetime starts, has the mount.

“My favorite thing about Epicenter is how consistent he has been, how he has looked (in the mornings),” noted Asmussen, who is Churchill Downs’ all-time leading trainer but is 0-for-23 in the Derby. “I think he looked the same on the racetrack today (Tuesday), four days before the Derby as he did in New Orleans this winter. Very professional, very consistent with his temperament and his stride. We are just wanting more of the same, just a little faster which is what he has done in every one of his starts this year and there is no reason he shouldn’t carry on.”

Also among the leading contenders in this year’s Derby are a pair of talented colts from California for trainer Tim Yakteen, a former assistant to Baffert. Top prospects Messier and Taiba were transferred to Yakteen as a result of Baffert’s two-year Churchill Downs suspension for Medina Spirit’s positive test that bans him from entering horses in the Derby this year and in 2023. Both horses began their respective careers in Baffert’s care and figure to be formidable on Saturday.

In the Santa Anita Derby (G1) on April 9, the stablemates squared off with Taiba—making just his second career start—defeating his more experienced stablemate Messier by 2 ¼ lengths for owner Zedan Racing Stables. Messier, a son of Empire Maker bred in Ontario by Sam-Son Farm, will break from post position No. 6 in the Derby and will be ridden by John Velazquez, who also piloted Medina Spirit last year. Messier spent his early formative days at Sam-Son Farm in Ocala, and he would become the third Canadian-bred winner of the Derby, joining Northern Dancer (1965) and Sunny’s Halo (1983).

Taiba, a $1.7 million son of Gun Runner, will begin from post position No. 12 and will have the services of two-time Kentucky Derby winning jockey Mike Smith, who won the 2018 Triple Crown partnering with Justify and was aboard Giacomo for his Derby victory in 2005. Taiba has flashed brilliance in his young career but will have to overcome history to wear the roses. The only other horse in history to win the Kentucky Derby in just his third career start was Leonatus in 1883.

Crown Pride (JPN) is aiming to become the first Japanese-bred winner of the Kentucky Derby. Winner of the UAE Derby (G2) at Meydan in the United Arab Emirates, the dark bay or brown colt is owned by Teruya Yoshida and is trained by Koichi Shintani. Crown Pride is a son of Reach the Crown (JPN), a grandson of Kentucky Derby winner Sunday Silence.