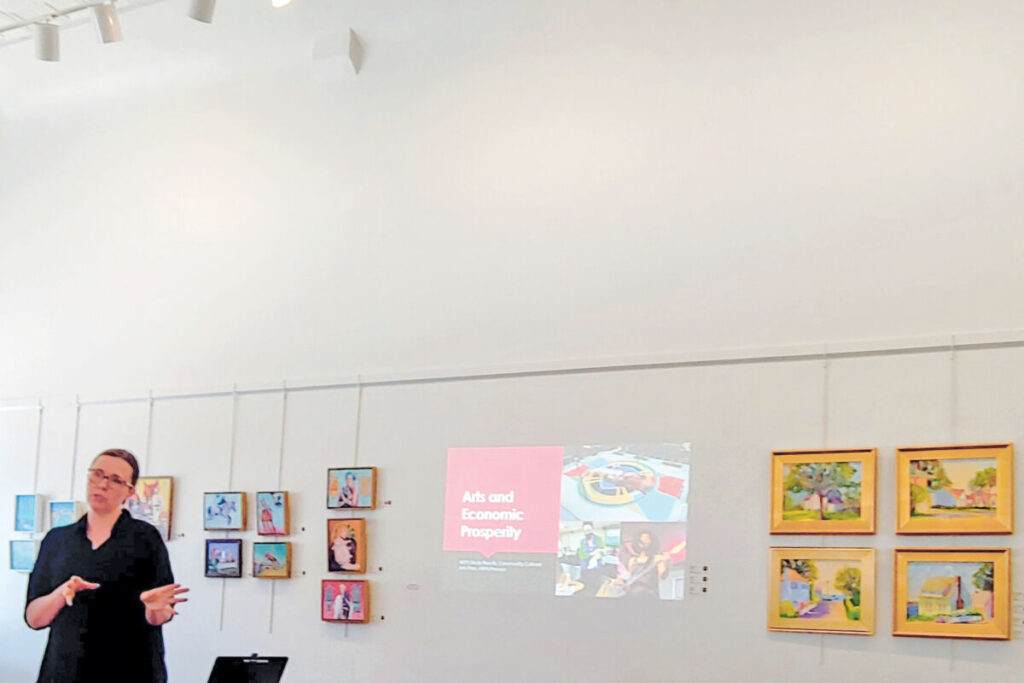 Laura Walker discusses the AEP6 at the MCA’s Lunch and Learn on April 15. [Photo courtesy of the Marion Cultural Alliance]

Americans for the Arts, a national nonprofit that works to advance the arts across the U.S., has enlisted Ocala to assess once again just how much visual and performing arts drive the local economy.

The 2022 sixth Arts and Economic Prosperity impact study (AEP6) surveys stakeholders and citizens via a wide variety of sectors — arts agencies, community foundations, economic development agencies, chambers of commerce, performing arts centers and other organizations — to find out what’s been accomplished and what needs to be done to bolster a community’s culture and bottom line.

The city’s collaboration with Americans for the Arts goes back to five years ago, when the organization tapped the city for its AEP5 study. The 2017 AEP5 reported that the nonprofit arts and culture sector is a $56 million industry in Ocala, supporting 1,422 full-time jobs and generating $6.1 million in local and state government revenue.

The findings were announced in 2018 during the CEP ExCEPtional Mornings breakfast (an event series hosted by the Ocala Metro Chamber and Economic Partnership) by Randy Cohen, Vice President of Research, at Americans for the Arts.

“Cohen’s presentation helped kick off our 10-year community cultural arts plan,” said Laura Walker, the head of the city’s arts, culture and sciences division as well as parks and recreation.

As reported by the Gazette in December, the Ocala City Council approved the Cultural Arts Implementation Plan, which provides a timeline for the master plan’s recommendations and assigns roles requiring the collaboration of several different organizations, ranging from the City’s Cultural Arts and Sciences to Growth Management and Recreation & Parks departments and several nonprofit arts organizations. Specifically, the Ocala/Marion County Chamber and Economic Partnership (CEP), Marion County Tourism Development Council (TDC), the Transportation Planning Organization (TPO), the Community Foundation Ocala/Marion County, and some of the larger equine industry organizations were tapped to collaborate.

Walker also said the city has coordinated with Marion County for an open public art survey, which will be used for the city’s strategic public art plan. The survey is available to anyone in Marion County to complete through April 30.

“I think as far as communities go, Ocala is interesting because we started with about eight public permanent public art pieces in our collection in 2017 and now we’re currently at almost 100 in our permanent collection,” Walker said.

At the Lunch and Learn, Walker went over the AEP5 study results and the community culture arts plan’s priorities along with the arts-related objectives that have already seen success.

“We’ve actually accomplished 41% of the recommendations already to date in that plan, which is pretty exceptional since we’ve only been in the (cultural arts plan) for two years,” Walker said. “Our community is really going for it.”

Walker said that Americans for the Arts selected Ocala to participate in the arts and economic cross-parity study (AEP6), which will begin on May 1. Ocala joins almost 300 other organizations and governing bodies across the nation to assess the economic impact of the arts on local revenues.

“Americans for the Arts paid for 50% of the cost for us to participate,” she said. “And then the remaining cost was split between the city and the county.” (Walker estimated the local cost to be around $3,000.)

The impact study will consider interest in the arts in the wake of the COVID-19 pandemic and the resulting economic recession.

“The arts will provide a significant boost as we recharge the economy in America’s local communities,” said a press statement from the Americans for the Arts, adding optimistically that the arts “will draw people out of their homes and back into community life—spending time with each other and spending their money with local merchants.”

Walker brings expertise working with the arts and government, federally and locally, while she lived in metropolitan markets in Indiana and Oregon. She’s been on the receiving and giving end of grant money allocation, working for a contemporary gallery and the Evansville Museum of Arts, History and Science.

“I was hired by the city (of Evansville),” Walker said. “I started as an administrative assistant to the executive director and then was promoted into community development. Part of my duties involved the implementation of an arts district in Evansville. After that, I ended up taking a position out in Oregon, which was federal programs-related.”

Networking, she says, is key to a vibrant arts and cultural scene especially when it comes to bringing in local revenues.

“It’s important to establish those professional relationships,” she said. “So that you know when you’re working on a project, you can reach out to those people in your network.”