The Ocala-based folk band Another Fine Mess piles on decades of talent and experience. 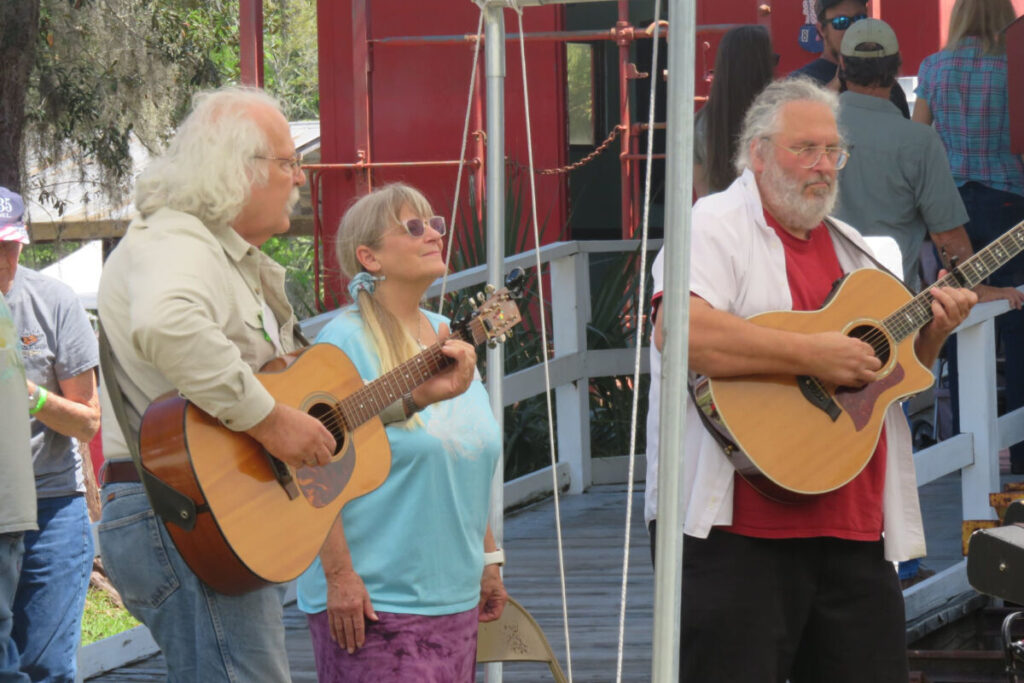 They’re three friends who have performed together throughout Florida, through the good times and some difficult losses. Husband-and-wife duo Glenn Smith and Linda Ellis Smith and veteran rocker Mike Roberts make up the harmonic folk-Americana band Another Fine Mess.

Roberts, now based in Port Charlotte, lost his wife and former bandmate, Debbie Jamieson, to Lou Gehrig’s disease a few years ago. Debbie came up with the band’s name, inspired by a famous line by the legendary comic duo Laurel and Hardy, because their name-choosing process had devolved into, well, a mess.

“Hardy would complain to his partner, ‘That’s another fine mess you’ve gotten me into,’” Linda said with a laugh.

Roberts said the trio wanted another band name to differentiate from Michael and Debbie’s band and settled on Too Many Smiths.

“The one I wanted was ‘Taste like Chicken,’ and they voted me down every time,” Glenn retorted.

Roberts used to play in rock ‘n’ roll bands and switched to country.

“Linda and my wife both had two of the sweetest voices in the Florida folk community,” Roberts reminisced. “So, for me, being in a band with them gave me a chance to do something I’ve always wanted to do: sing in an acoustical band. As Another Fine Mess, we have quite a unique sound, and after Debbie passed, the band became a trio. Sometimes we use a bass player or somebody will sit in with us.”

Glenn, who used to perform in Myriad, a popular Tampa Bay-based folk band, said he prefers harmonizing to singing lead. He provides striking complements to Roberts’ lead with his acoustic, what he proudly calls “color guitar.” On listening, you’ll notice accompaniments that are indeed special swirls that come in the form of arpeggios and intricate background layering.

Roberts is skilled on both electric and acoustic guitar. He writes poignant tunes inspired by real-life encounters such as the tragic tale of the Island Creek Mine, a coal operation that closed down in his Kentucky hometown, leaving many in the community without jobs.

Linda, a retired French teacher formerly with Marion County Public Schools, sings lead and plays rhythm with her acoustic guitar. Glenn and Linda got together in 2004. They, like Roberts and Jamieson, met at the Will McLean Festival, known to musicians and music lovers as Will Fest.

The Smiths joined Roberts when he and Jamieson were living and performing together in Crystal River. The couple played every weekend in the Woodview Coffee House, which they helped stay open with their congenial performances and guest performers. It was during that time that the two couples formed Another Fine Mess.

“I’m originally from Long Island,” Linda shared. “I went to Florida State University and ended up in Pompano Beach for a while, then Michigan and moved to Ocala in 1981. At that point I wasn’t playing any music. I ended up having three kids and I didn’t play again for a long time. It was around 2000 when I picked up my guitar again. … I have also spent a lot of time in church singing in church choirs. I’ve always gone up to sing.”

The trio say they don’t worry about fame or money; They play festivals and church events for the joy of it. Linda and Glenn (and Roberts, when he’s in town) have even played local retirement homes to provide cheer for residents unable to get out and enjoy entertainment.

“In 2007, we performed for Lin’s grandma,” Glenn recalled. “We wanted to just play for her. So we got her to come out and sit in the hall. We played a couple of jazz standards and we looked up and like 60 people had wandered over because they were so starved for something and they were all singing along.”

Together and through their side projects, all three musicians have a penchant for storytelling and sweet harmonies, as well as knowing how to connect with their audiences.

A fine mess to be in, indeed.

Another Fine Mess’ next performance will be at the Hibiscus Festival in Punta Gorda on May 1. To learn more and get other updates, visit their band group page on Facebook at facebook.com/groups/716709319357390/.