Annual fundraising luncheon surpasses prior tally and proceeds will help homeless women and their children. 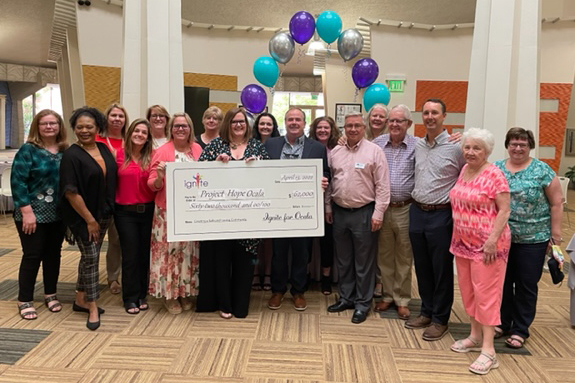 The giant check bore the figure $62,000. That marks the most money ever raised by Ignite for Ocala during its annual luncheon, which took place on March 10. On April 13, Project Hope became the recipient of those dollars, which will help the nonprofit serve even more homeless women and their children.

Ignite for Ocala was formed to help local nonprofits that share the group’s mission of creating a safe and loving community. The nonprofit Project Hope was established by a faith-based community group and has offices at its 40-unit Hope Villas transitional living apartment complex. Some of the units are rented at market value to help sustain the program model, which helps foster self-sufficiency for the homeless mothers to aid them in becoming independent so the likelihood of them being homeless again is much less.

The women chosen to participate do not pay rent the first month. After that, they pay a subsidized fee to cover a portion of the rent and utilities. Once they find employment, the fees increase until they can pay the full cost. The average residency is 12 to 18 months.

“With these funds from Ignite, we will be able to house four more homeless single women and their children this month,” said Project Hope Executive Director April McDonald.

“It also will allow us to continue to supplement housing costs for the 22 apartments at Hope Villas, to include weekly life skills classes such as budgeting and conflict resolution. It also will help them further their education. The monetary donation was an incredible blessing and the partnerships and friendships formed the past six months are priceless,” McDonald added.

Jeanne Henningsen, the founder of Ignite, explained that nonprofits can apply to Ignite for funding consideration and how Project Hope was chosen this year to receive the record-setting donation. She said they reviewed 19 nonprofit applications and narrowed it down to the top 10.

“We then decide the top three that we will interview. After that, we choose the nonprofit that we want to support for the year,” she said.

“Project Hope stood out for us because of the way that they don’t just provide a place for these homeless women with children to live but they also teach them how to live. We were very impressed by their program and the many ways they help the women become self-sufficient. April’s passion and commitment to these families was so real and authentic, it brought our team to tears. We are so grateful April made the decision to apply so we could be blessed by knowing her and her team as well as see first-hand the lives Project Hope is changing,” Henningsen added.

“I would say to other charities, if they haven’t applied for this annual award, I would highly recommend it because the blessings are endless,” McDonald said.

Because Project Hope is faith-based, it does not receive state or federal funding and relies on community support. McDonald said there is a constant need not only for monetary donations, but also for furniture, kitchen items and other household goods as the women take those things with them when they move out of Hope Villas. To learn more, such as how to donate and about volunteer opportunities, visit projecthopeocala.org.