They are the first in their club to land a slot in a prestigious state conference. 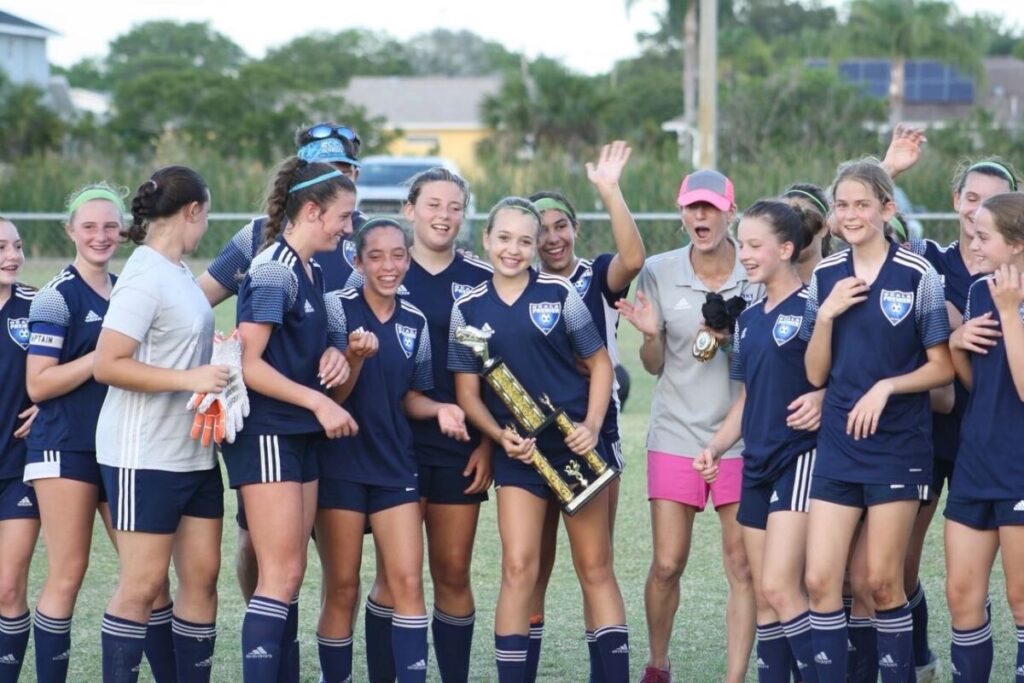 The road to the U.S. Youth Soccer Sunshine Conference wasn’t smooth, but the Ocala Premier girls’ soccer teams put their cleats to the heat and made impressive tracks toward the state tournament this year.

“This is a first for the entire club,” said the Big Sun Soccer/Ocala Premier President Jay Fratello. “Most of the teams that we are playing against come from areas with much bigger populations such as Tampa, Miami, Boca (Raton) and Orlando.”

Glimmers of greatness could be seen when the 2005 girls placed third in the Florida State Premier League as finalists in the Lakewood Ranch Labor Day Showcase. At the IMG College Cup showcase last December, they scored two wins and a draw.

“There was one moment for me though that made me very proud and excited for the future,” recalled Coach Cam McGregor. “It was our first State Cup game on a Friday night (Aug. 5). The team we were playing against was not a new team for us. We had played them earlier in the season and both times they beat us 1-0.”

The first time FC Prime Miami beat Ocala, the team “was hanging on by a thread,” MacGregor added. “They were defending like crazy and just trying to survive the 1-0 defeat. Fast forward five months and, yes, they beat us 1-0 again, but it was a completely different game. We controlled every aspect of the game besides the score.”

While watching the girls play that game, it “really sunk in” for McGregor how far his girls have come.

“We lost to 1-0 to a team that ended up being a 2021 Florida State Cup semi-finalist,” he explained. “To think a group of girls from Ocala were able to accomplish that is not only exciting for this group but hopefully exciting as well as inspiring for the young ladies coming behind them.”

The 2008 Ocala Premier Girls Team (born 2008-09) are following in the high schoolers’ footsteps and also are headed to the conference.

“We have a lot of talented younger players,” Fratello said. “It is pretty unique to have such a high-level team with girls that are actually playing-up a year. I would say the big moment was last year when we made it to the semifinals of the Weston Cup, arguably the top tournament in Florida and one of the most prestigious in the Southeast. I think at that moment we knew we were capable of really big things.”

The key to their success? Fratello credits the caliber of coaching.

“Coach Cam has an international license (among several other certifications),” Fratello said. “We also have Coach Owen McCarthy, who has coached professionally and also at the college level.”

Coach Stephanie “Pezz” Pezzullo, the club’s performance and fitness director, leads the 2008 girls with the assistance of Fratello.

“Coach Pezz was one of the best high school players in the country and then she went on to play at Penn State, where they won the Big 10 title four years in a row,” Fratello said. “Several of her teammates were on the U.S. women’s team and the Olympic team.”

Pezzullo later decided to become a long-distance runner and ended up being one of the best in the country. Today, she helps people of all fitness levels achieve their running and exercise goals.

Earlier this year, Ocala Premier 2005 player Victoria Carter made the news for her accomplishments with West Port High’s team. According to published reports, Carter has led in goals with 36, ranking her 13th in Florida and 22nd in the nation. She supported her team with eight assists, scoring a total of 80 points.

Longevity is another key to the teams’ success.

“Some of our players started when they were in kindergarten and stuck with us,” Fratello said. “We have a great group of coaches and volunteers who help run the club and have invested in those kids over the years.”

After he expressed gratitude for the sponsorships they have received, Fratello said the club has been stretched thin, with about 150 kids on a waitlist, partly caused by not having sufficient fields for play. Making matters worse, they have been practicing at different sites while their Big Sun Youth Soccer League homefield undergoes repairs.

“We have worked hard to keep fees low, and we currently charge half of what other area clubs our size charge,” Fratello said. “We also try not to ever turn anybody away for the inability to pay. This year, we are investing $10,000 in scholarships for the competitive program, but there’s a real need for more sponsorships.”

Both Fratello and MacGregor expressed hope that news of the upcoming tournament will help attract more buzz and community support for Ocala Premier.

“It would be great if the community would just come out to see the games,” MacGregor added. “It’s one thing to see Mom, Dad and Grandma, but it’s so much more exciting when there’s a crowd cheering them on.”