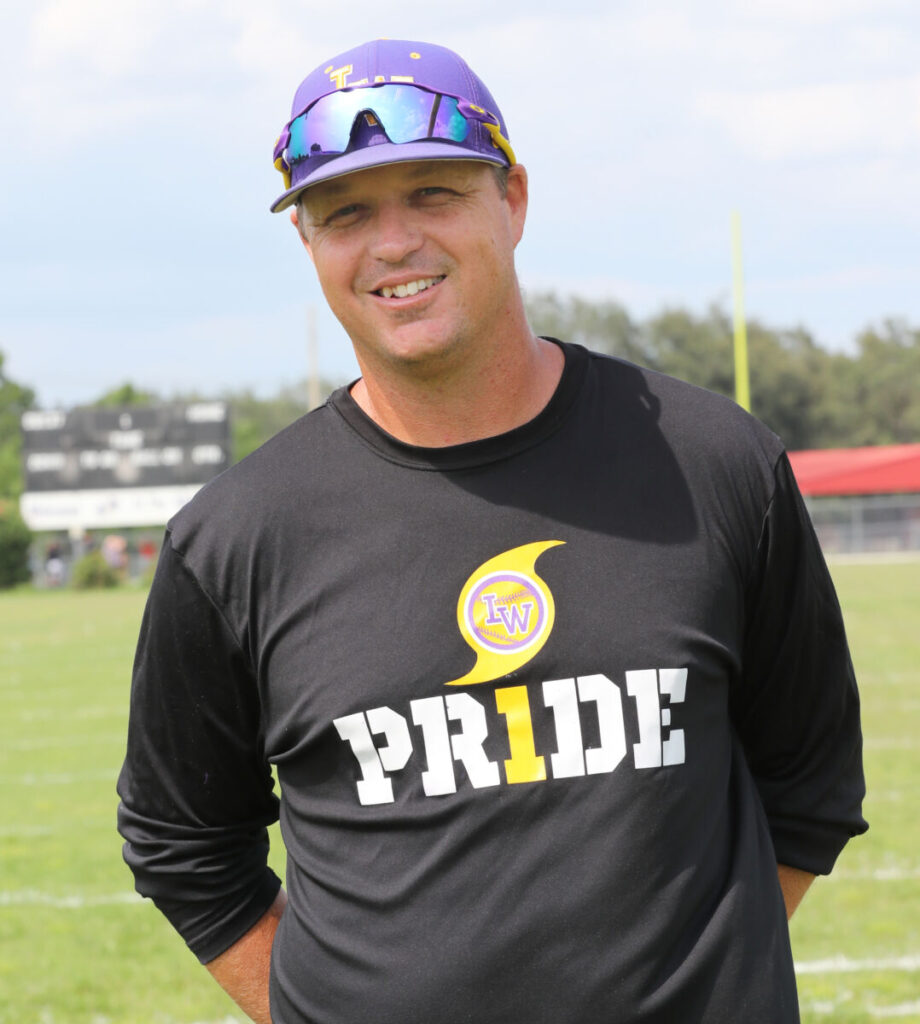 Jason Roberts, the new head football coach for the Lake Weir Hurricanes, poses for a photo on the field at Lake Weir High School in Candler, Fla. on Tuesday, August 16, 2022. [Bruce Ackerman/Ocala Gazette] 2022.

Orlando native Jason Roberts started playing multiple sports from an early age. Whether it was baseball or football, he enjoyed the thrill of competition.

Roberts became hooked at a young age and his family created the perfect atmosphere to instill the trait in his personality.

“I’ve always loved the competitive side of it. My father was always into sports and my mom was into sports, so growing up it was kind of that way. My uncles played sports and so everything we did was always a competition between one another,” he said.

Eventually, football won out over baseball, and Roberts said he relishes the vibes of the sport. “I love the contact of the game,’’ he said. “I love the physicality of the game and compared to baseball, it’s a much faster moving game.”

Roberts played under Phil Ziglar at Boone High School in Orlando. Ziglar, a high school coaching legend in central Florida, instilled accountability in his players, a lesson Roberts remembers to this day.

After high school, Roberts joined the Army and hoped to become a paratrooper. The idea of joining the military started in middle school, according to Roberts, and he joined in July 2001. Two months later, the Sept. 11 terrorist attacks shook America to its core. Roberts’ unit, the 173rd Airborne Brigade, which is a quick-reaction unit, was pulled from Kosovo and sent to Iraq.

He would end up serving in three combat tours in Iraq and Afghanistan during his 10-year military career before coming back to Florida. His experience during his time of service molded him into the man he is today.

“The military changed my life; I don’t know where I would have ended up without it,’’ Roberts said. “It definitely instills a work ethic that I don’t think can be found anywhere else. The biggest part is not only holding yourself accountable, but your teammates as well.”

His time in the Army has influenced his coaching style because of the vast number of different leaders he encountered.

“My first sergeant told me that a leader who is yelling all the time is a sergeant who is covering up what he does not know,” he said. Roberts said he wants to avoid constantly yelling because he feels as if it could eventually make the kids tune him out. He would rather be more uplifting and positive.

Robert’s coaching journey has covered a large area in central Florida. After coaching youth football for a year, he met with high school coaches and landed a job on the JV staff at East Ridge High School. Two years later, he moved on to be an assistant at Tavares High School before heading back to East Ridge as the defensive coordinator for varsity. He then moved on to Umatilla High School for the same position for two years before being hired at Poinciana High School.

Roberts, now 39, was hired in February to coach Lake Weir, where the Hurricanes have gone 4-23 over the past three seasons. Despite the challenge of rebuilding the program, the new head coach is excited about the opportunity.

From day one, Roberts has put emphasis on creating a positive culture for his team.

A crucial component of a coach’s career is having the support of their family and Roberts is very thankful to have the full support of his wife, Lynsie, and his two daughters, Emilia and Eliana. The impact that his wife and daughters have on his career go beyond measure and allows him to put things in perspective.

“They humble me,’’ he said. “Like any other coach or any other competitor, you get wrapped up in the sport. Sometimes you come home, and the game doesn’t go our way, or something happened at practice or school. You go home, and you’re upset. When you walk in the door, and you see them, and you just see the joy in their faces, and you just forget about it. It definitely helps reset my day and you have to be willing to separate everything and enjoy your family for that time.”

Being a parent has made Roberts more aware of how much time the team and assistant coaches spend at practice or working in the weight room. Roberts said he does his best to respect their time with family.

Sports tend to revolve around the result of games from the high school level and up, but the goals for the 2022 Lake Weir Hurricanes football team are not so cut-and-dry.

At the end of the day, Roberts want to leave a lasting impact on the team by teaching them and developing them as outstanding young men.

“When you get to see them grow and actually utilize the lessons, when they can have a good time but also be serious enough to get the job done,’’ he said, “that’s awesome and amazing.”