The Toni James, APR, CPRC, PACEsetter Award was renamed for her years of leadership and service. 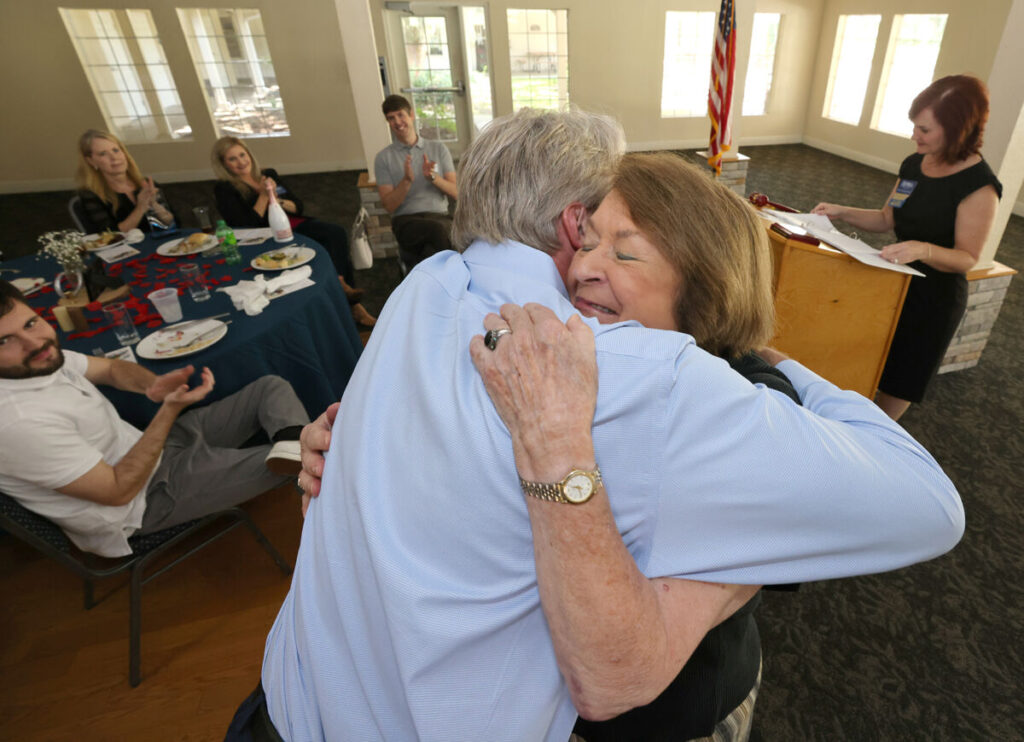 Toni James gets a hug from her son, Tom James, after she was honored during the Florida Public Relations Association Ocala Chapter ceremony at the Ocala Golf Club in Ocala, Fla. on Friday, August 19, 2022. The Ocala Chapter renamed its annual PACEsetter member of the year award in James’ honor. James was a founding member of the Ocala Chapter in 1980 and twice served as chapter president and State Vice President of Golden Image. She retired in 2006 as president of United Way of Marion County, an organization she served for more than 30 years. [Bruce Ackerman/Ocala Gazette] 2022.

Those who accomplish significant achievements in life often are honored by having something named for them, such as a building or a road. On Friday, Aug. 19, the Ocala Chapter of the Florida Public Relations Association (FPRA) renamed its PACEsetter Award in honor of Toni James, APR, CPRC.

The chapter’s PACEsetter award was established in 2004 to recognize a member who demonstrates excellence and helps advance the chapter and state association mission. PACE stands for Professional and Career Enhancement. Recipients are selected by the chapter president. James was the recipient of the award in 2011.

James was a founding member of the Ocala Chapter in 1980, twice served as president and was state vice president of the Golden Image Awards, a competition conducted annually by the FPRA. In 2009, she was the recipient of the Doris Fleishman Award, a statewide award honoring a selfless, dedicated volunteer who steadfastly and quietly contributes to the public relations profession.

James is well known locally for her more than 30 years of service with United Way of Marion County, including as president. In 2018, she was honored with a Lifetime Achievement Award by the Ocala Chapter of FPRA, in part for her work with United Way.

She is the owner of Toni James & Associates Strategic Public Relations. She has served on numerous community boards, such as with the Ocala Symphony Orchestra, and has been involved with groups such as Friends of Munroe Regional Medical Center, Save the Marion Theatre, Women of Worth, Ocala Women’s Network, Rotary, Marion County Children’s Alliance, Friends of the Ocala Public Library, Success By 6 and Kids Central.

Of the honor bestowed on her Friday, James said she was “overwhelmed.”

“I’m just grateful for what I could do, and for what it meant,” she said. “And I’m so grateful for this organization, which I have belonged to for more than 40 years.”

The festive luncheon event also honored past chapter presidents and 15 were in attendance. One of them, Carol Savage-Hagans, APR, CPRC, paid tribute to them, especially James, saying she had helped “pave the way” for others.

Immediate Past President Heather Danenhower Nelson, APR, CPRC, was the emcee for the event. She invited James to help her present the newly-named Toni James, APR, CPRC, PACEsetter Award to both Tina Banner and Beverly Brown.

Devon Chestnut, a member of the Ocala Chapter, who is immediate past president of the statewide association, installed the chapter’s incoming board members.

To learn more about the chapter, go to fpraocala.org