They’ve experienced fresh air, human affection and outdoor play at the no-kill shelter, most likely for the first time. 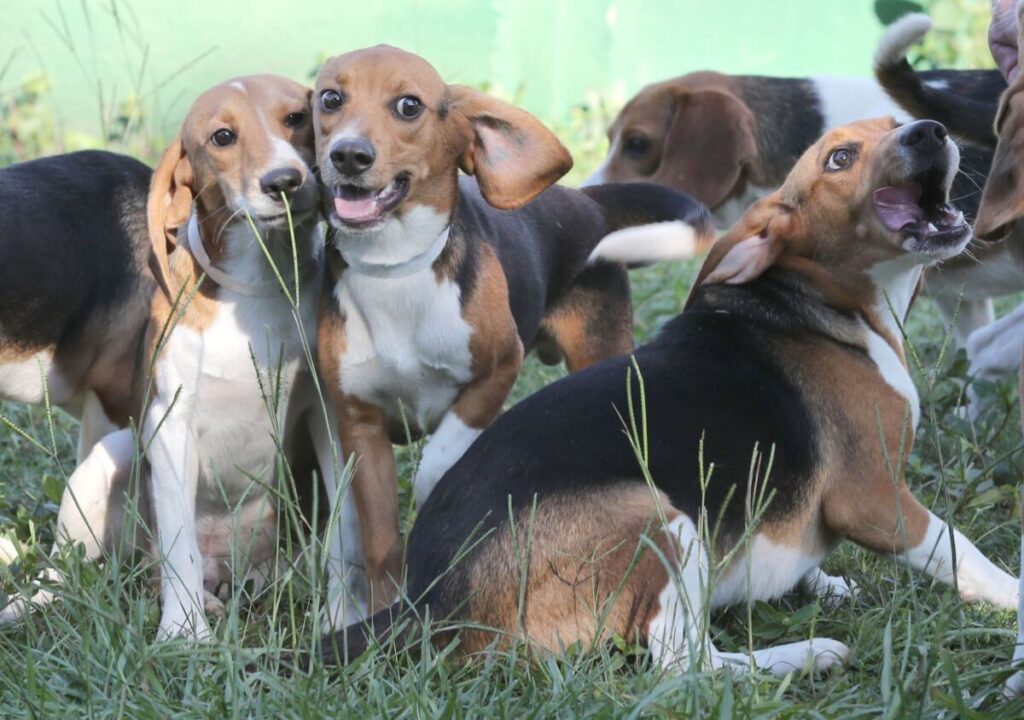 Some of the 15 male beagles from Virginia play together in a field at the Humane Society of Marion County in Ocala, Fla. on Friday, August 19, 2022. 4,000 beagles were seized from The Envigo Facility breeder in Cumberland, VA by the U.S. Humane Society with a court order about two months ago. The beagles were being bred for medical procedures, some of them extremely painful and inhumane. The Humane Society of Marion County drove to the breeder facility to pick up the dogs. The beagles are getting used to their new home and enjoying being out running around together. They have never been outside of a cage or out in the fresh air. The dogs will be available for adoption once they have been neutered and when it is found they can be adopted in about two months. [Bruce Ackerman/Ocala Gazette] 2022.

Floppy-eared, tumbling, fumbling puppies are always cute, but on the morning of Friday, Aug. 19, a new batch of beagles in town tugged extra-hard at the ol’ heartstrings.

The 7-month-old male beagles leapt about, licking affectionately, running around in packs around the play yard of the Humane Society of Marion County. They were 15 of the 4,000-plus beagle puppies rescued from a massive breeding factory in Cumberland, Virginia.

Their rehoming is historic, a mammoth undertaking and a first for all involved.

The beagles’ journey to Ocala began last year, when an undercover PETA of the facility owned and operated by Envigo reported thousands of puppies with no beds, toys or stimulation of any kind. For more than 50 years, they had bred them there to sell to laboratories for experimentation.

According to PETA, “the dogs were kept in sheds that stretched as long as a football field and were deafeningly loud when hundreds of them barked at once … louder than a rock concert,” a harrowing thought considering the sensitivity of dogs’ ears.

“Deafening” happened to be the word that Eddie Leedy, executive director of the Humane Society of Marion County, used to describe the chorus of yelps that greeted him and his crew when they retrieved the 15 puppies in Cumberland, Virginia, yesterday.

Humane Society shelters and other animal rescue organizations across the nation drove to the facility to put the dogs up for adoption.

Leedy, who has two beagles of his own, had just driven 11 hours overnight, straight with no breaks, and was up early the next morning to hang out with pups. Most likely, it was the first time the pups had experienced human affection.

“We had no say in which dogs would be ours,” Leedy said. “The Humane Society of the United States got involved, and based on things that were going there with euthanasia; they made a plea across the nation for rescues to assist them. We typically don’t go outside in the state of Florida, but on a rescue this large, it was all hands on deck.”

Unloaded one by one, the dogs bore tattooed ID numbers on the inside of their ears.

“They had no names, but that’s changing now,” Leedy assured.

Leedy also said that the pups would enjoy outdoor playtime mornings and late afternoons when it’s not too hot out, and the public is welcome to visit them.

The no-kill shelter is caring for the beagles for the next two weeks and neutering them before they’re put up for adoption.

The sheer joy and excitement of the rescue is a welcome contrast to what Investigators found at the Virginia facility. More than 350 puppies died among their cramped littermates and mothers. Some puppies had been inadvertently crushed to death by their mothers inside the cages. Others suffered from hydrocephalus (when fluid builds up inside the skull and puts pressure on the brain).

PETA cited Animal Welfare Act violations, and in May, the U.S. Justice Department secured the surrender of thousands of dogs. Envigo, has declined to comment to the press. Their parent company, Inotiv, said in a statement that it had reached a settlement with the DOJ and the US Department of Agriculture. The company will not have to pay any fines or penalties and makes no admission of liability or wrongdoing.

The Virginia facility will shut down once all of the dogs have been removed.