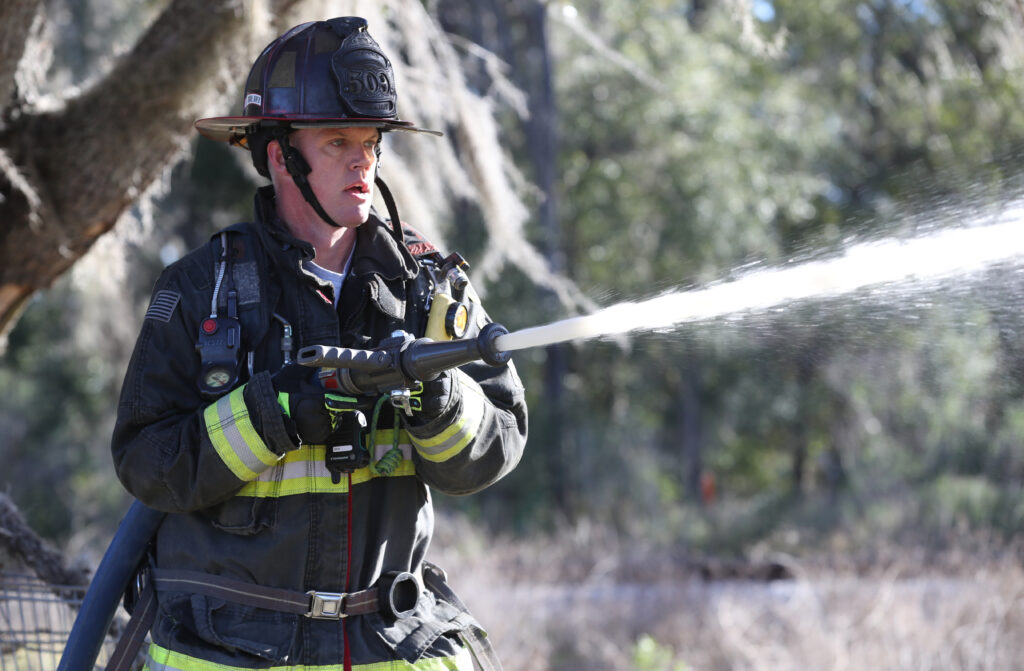 Capt. Jules Bouckhuyt of Ocala Fire Rescue sprays water from a hose as he aims at a target during a National Fire Protection Association 14-10 drill in southwest Ocala, Fla. on Tuesday, February 2, 2021. Members of Ocala Fire Rescue Station 1 were using the timed NFPA drill to practice their technique when entering a burning structure. [Bruce Ackerman/Ocala Gazette] 2021.

Capt. Jules Bouckhuyt of Ocala Fire Rescue sprays water from a hose during training in Ocala on Feb. 2. Funding for fire rescue has become an issue since the city’s fire fee was deemed an illegal tax by a court last June. [Bruce Ackerman/Ocala Gazette]

Ocala’s non-profit organizations will soon start receiving bills from the city, seeking hundreds if not thousands to help pay for fire services. It’s a bill some didn’t expect as non-profits are exempt from most taxes.

“I have to admit that I just learned yesterday that we aren’t exempt, so I haven’t yet figured out what the financial impact will be for us,” Interfaith Emergency Services’ CEO Karla Grimsley said in a text. “At this moment, all I can say is that I’m very concerned.”

The situation came about after the Florida 5th District Court of Appeal deemed Ocala’s previous method of paying for fire services illegal. The city had to find another way to fund the service. They settled on a non-ad valorem assessment that applies to all property owners, even those that usually don’t pay tax.

“That’s a tough one. We understand,” said Ocala’s city attorney Robert Batsel Jr. of the inclusion of non-profits in the assessment.

Batsel said the method is a more equitable way to spread out the cost of fire services, which are available to everyone, including those organizations that usually don’t pay property tax.

The city is collecting $9.2 million to fund Ocala Fire Rescue from February to September. A full fiscal year will require the city to collect $13.8 million.

But for organizations like Grimsley’s that already work on a tight budget, the hit can be significant.

Interfaith’s main campus, located at 435 NW Second St., features two non-residential buildings totaling 11,830 square feet, which will cost the organization $1,172. Next year, when Interfaith pays for an entire fiscal year, that bill could hike up to $1,758. The organization has at least three other buildings on different sites as well.

Lauren Deiorio, president and executive director of the Community Foundation for Ocala/Marion County, works with more than 130 local non-profits. She fears the assessment, paired with non-profits still navigating through the COVID-19 pandemic, could spell trouble.

“I think for the most part, as non-profits are trying to reposition themselves and try to come out of the COVID crisis, a lot of them have had to make some very difficult decisions in their budgeting,” Deiorio said. “And I imagine there’s been some budgetary costs or expenses that had to be eliminated.”

For leaders like Grimsley, those difficult decisions will likely be made in the coming weeks as the first bills start to roll in.

But it’s not just non-profits. Batsel said city, county, state, federal, school board, college and hospital property in the city are all subject to the new assessment.

In 2006, the city added a monthly fee to every city resident’s Ocala Electric Utility bill. Every city resident who had electric service paid approximately $15 per month to help pay for fire service. The court deemed that fee an unconstitutional tax and ordered refunds to those who paid it from February 2010 to July 2020, when the city finally stopped collecting the fee. That could be as much as $80 million in refunds.

While this year’s fire assessment only included residential and non-residential property categories, Batsel said future assessments could breakout other categories and adjust the amounts assessed.

“One thing that is important to understand is there are good discussions to be had to have this more fair and equitable. We are continuing to have those discussions,” he said.

However, there’s only so much that can be done.

“It’s like a water balloon. You can push on one side, but it will bulge on the other,” he said. “You still have the same amount of water.”