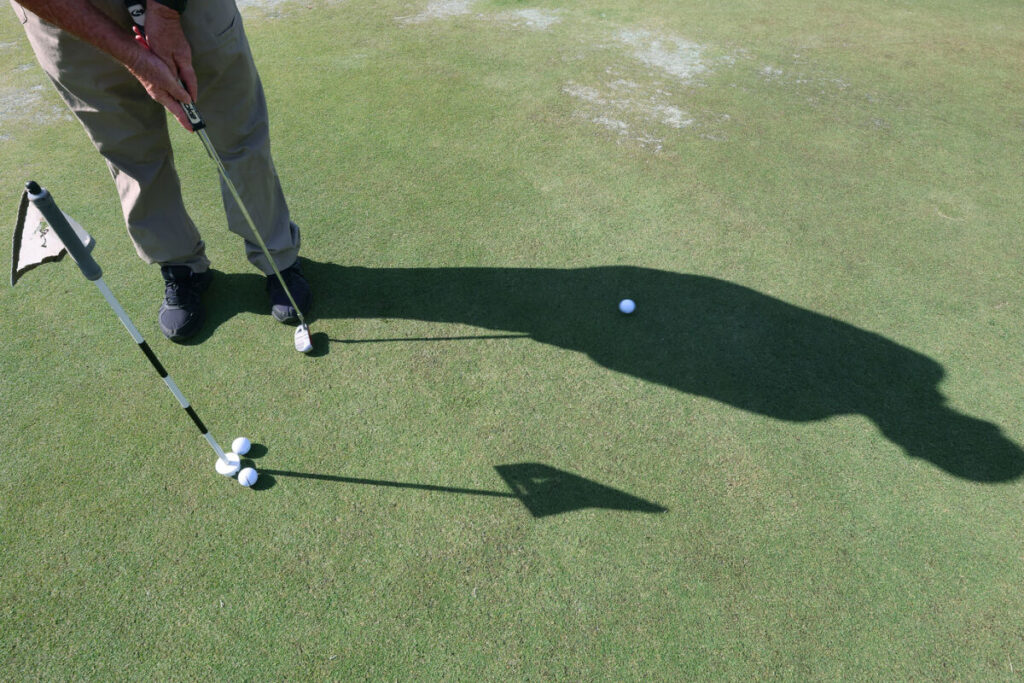 In this file photo, Charles Hitchcox casts a long shadow as he putts on the practice putting green at the Ocala Golf Club on East Silver Springs Boulevard in Ocala, Fla. on Tuesday, Nov. 9, 2021. [Bruce Ackerman/Ocala Gazette] 2021.

The Ocala City Council approved a five-year renewal agreement with Indigo Sports, LLC, to manage the Ocala Golf Club on Tuesday, June 7. The agreement came in the amount of $511,778.

Formally Billy Casper Golf, LLC, Indigo Sports first entered into a five-year management agreement with the City of Ocala in 2012. The agreement was renewed on April 18, 2017 with a September 30, 2022 expiration date.

Last year, the “Gazette” reported that the Ocala Golf Club had originally budgeted for $1.734 million in operating expenditures in 2021, and at one point even adjusted that number up to $1.769 million.

But in the end, the club spent $1.5 million for operating.

During 2020-2021, Ocala Golf Club budgeted $1.54 million in revenue but realized $1.39 million in revenue collected from greens and cart fees, all food and beverage purchases, banquet hall rental fees, memberships, pro shop merchandise, and league and event fees such as tournaments.

The budget had help in that it received over $622K identified as miscellaneous revenue.

According to city officials, the city sold a piece of the Pine Oaks golf course to West Oak Developers, LLC, and the net revenue from that sale in the amount of $622,489 was applied to the city’s golf club budget.