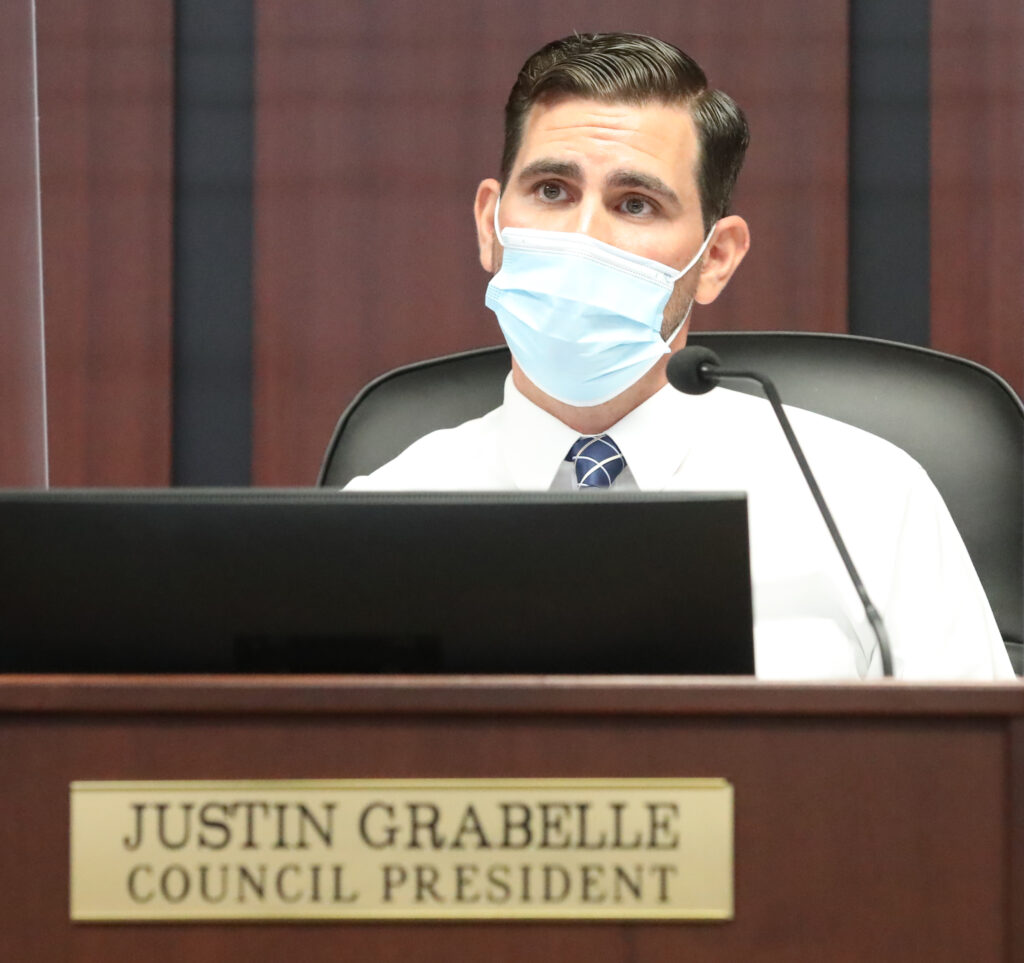 Some on the Ocala City Council complained this week about the Marion County Commission’s efforts to get the last $34.5 million in Coronavirus Relief Funds from the state and stash it in the county budget.

Mayor Kent Guinn asked at one point in Tuesday’s City Council meeting whether the council was aware that the county intended to keep the last $34.5 million in Coronavirus Relief Funds expected from the State without doling money out to the municipalities, including Ocala.

“It’s not my council issue, so you guys need to decide if that is OK, or if they need to get their No. 2 pencil and a yellow pad and calculator and we’ll deliver coffee and let them figure it out who’s owed what,” Guinn said during Tuesday’s City Council meeting. “Because I’ve been doing this for 20 years, 21 years, and you know, it’s not this commission, it’s every commission. We go through this from fire service fees that they refuse to pay from, you know, you name it.”

Guinn’s criticisms were prompted by a County Commission decision earlier this month to ask the state for the final, Phase 3 draw of relief funds.

Facing a Dec. 30 deadline to apply for the $34.5 million, the County Commission decided to request the money and make the case that the money is to reimburse the personnel costs for all public safety employees in Marion County for 2020.

In doing so, the County Commission rejected another alternative: Split the money among the county, the Sheriff’s Office and the municipalities.

City Manager, Sandra Wilson, confirmed that the city had investigated whether the county had any requirements to share the money, and found no rule requiring the County to do so.

“It’s been expressed to them that we have costs associated with this as well and would like to be included in that process. And I think that they have, unfortunately mayor, like you’ve said, you’ve listed the number of, I think, grievances that City Council has with the commission, and I think this is just one more unfortunately to that list.

“We did actually look to see whether the law, you know, required that they share it with us. I don’t think that was the case,” Grabelle added. “So unfortunately, unless they have a change of heart, well, I tend to agree with you, but we can all reach out to them and express, you know, our concerns and maybe that will add some weight.”

The relief in question is the Coronavirus Aid, Relief, and Economic Security (CARES) Act, signed into law on March 27, which created the Coronavirus Relief Fund that provided $150 billion in direct assistance for domestic governments.

The State of Florida received more than $8.3 billion of that fund with direction to allocate 55 percent to the state and 45 percent to eligible local governments.

On June 10, 2020, Governor Ron DeSantis announced the State of Florida’s plan to disburse up to $1.275 billion in CARES Act funds to counties with populations below 500,000, which included Marion County. Using a phased approach, the Florida Division of Emergency Management (FDEM) would distribute funds to the remaining counties using the following criteria:

In that same statement, DeSantis tasked each county with providing “funds to municipalities located within their jurisdiction on a reimbursement basis for expenditures eligible under the CARES Act and related guidance.”

Marion County was advanced $28.7 million in CARES Act funding in two phases early this year and partnered with local groups to distributed it to businesses, organizations, local municipalities and individuals who applied and demonstrated a financial impact for the COVID-19 virus.

A report to the County Commission on Nov. 19 by the Marion County Clerk of Court reflects that Marion County government has already been reimbursed or encumbered at least $13 million of the $28.7 million total. The remaining had been distributed to community partners such as AdventHealth hospital, CEP, and the Community Foundation.

The cities of Ocala, Dunnellon and Belleview received a relatively low portion of the funds thus far: Ocala $729,942; Belleview $75,382.12; and Dunnellon $51,982.00. Combined, those allocations are only about 3 percent of the relief funds received by the county in phases 1 & 2.

Mounir Bouyonnes, County Administrator, outlined two options for how the county could apply for Phase 3 funds at the Dec. 1 meeting.

The first, recommended choice was to take advantage of a recent “state adjusted payroll eligibility to include all Public Health and Safety employee hours” and submit one project reimbursement to the State for payroll from Emergency Management Services, Public Safety Communications, and Sheriff’s Jail and Emergency Management, all of which had been also accounted for in the 2020 budget.

Under this first option, once the money was received it would go to the General Fund, where the board would have flexibility to fund the remainder of the county’s obligations and unforeseen expenditures related to the pandemic without the restrictions for use that originally came with from the Treasury Department.

The second option offered by Bouyonnes came from a “discussion among the Sheriff’s Office and municipalities to split the payroll reimbursement amounts.” If the board chose this second option, Bouyonnes asked that they agree that all county obligations and projects currently being processed be submitted for Phase 3, and the remaining amount be split among the agencies” including Board of County Commissioners, Marion County Sheriff’s Office, City of Ocala, City of Dunnellon and City of Belleview.

In considering the two options, the commissioners suggested that the money could be used for everything from covering the cost of delivering the vaccine to additional financial relief for businesses and organizations.

Commissioner Kathy Bryant even suggested that it could be used to lower taxes if any is left over at the end of the next fiscal year.

Commissioner Craig Curry asked for assurances that the board would entertain requests of area municipalities – Ocala, Belleview, Dunnellon, Reddick, McIntosh – for relief. A few of the commissioners assured Curry they would.

The County Commission chose the first option, leaving the question hanging on how the county will spend the CARES Act funding if the application is funded by the State, and leaving the City of Ocala feeling like the county was not playing fair with the relief funds.

Interestingly, the Department of Treasury had provided instruction for how to split relief money between counties and municipalities with populations in excess of 500,000, according to their respective populations’ pro rata, but stayed silent in regards to how the money should be split between counties and municipalities that did not meet that 500,000 mark.

“Based on our population size, the county was then given the option for how they would disperse any funds. During Phase 1 and Phase 2, they wanted to assist local communities by helping the local cities, hospitals, and non-for-profits with their related COVID-19 expenses,” said Ashley Dobbs of the City of Ocala. “During Phase 3, they have opted to keep the entire allocation, which based on (Treasury Department) standards, they are within their rights.”

“It should be noted, State lobbyists have argued that the dispersal methods need to be clarified moving forward. There is the potential for future legislation to clear up the language on how funds are allocated in small to mid-range counties to avoid any further confusion.” Dobbs added.

It’s not a sure thing, however, that the county’s strategy will pass state review.

The county’s application for Phase 3 is based on the county’s understanding of a recent update by the Department of Treasury, changing what Public Health and Safety employee payroll was reimbursable. The change departed from the original rules that restricted payroll reimbursement for Public Health and Safety employee if the expenses were originally “accounted for in the budget most recently approved by the government as of the date of enactment of the CARES Act [March 27, 2020].”

In Sept. 2, the Treasury Department issued guidelines stating, “while the Fund was not intended to be used to cover government payroll expenses generally, the Fund was intended to provide assistance to address increased expenses, such as the expense of hiring new personnel as needed to assist with the government’s response to the public health emergency and to allow recipients facing budget pressures not to have to lay off or furlough employees who would be needed to assist with that purpose.” This guideline mirrored one of DeSantis criteria, that government entities should not reimburse themselves for expenses “accounted for in the budget most recently approved as of the date of enactment (March 27, 2020).”

So while it would appear Marion County’s request to subsidize their first responder payroll with the money violates the intent of the CARES Act fund, county administrators are leaning on a separate Treasury Department document that came out Sept. 21 to make their case.

That document, a Frequently Asked Questions sheet issued by the Treasury Department’s Office of Inspector General, allows governments to use the money for payroll if they can demonstrate that the “public safety employee’s function/duties were in fact substantially dedicated to mitigating the (COVID-19) emergency.”

“The change was that Public Health and Safety Employees are now eligible by default and do not need additional documentation showing they are substantially dedicated to responding to the COVID-19,” McCain said.

Perhaps working in Marion County’s favor is that the government was “not required to perform an analysis or maintain documentation of the substantially dedicated conclusion for payroll expenses of public safety, public health, health care, and human service employees.”

Michael T. McCain, fiscal manager for the Board of County Commissioners, confirmed there was no delay in following the commissioners’ instruction, “All the Phase 3 projects were submitted on 12/2 since there was a 12/3 deadline for submission of new projects. We are able to update the documentation to the submitted projects. Last update of documentation was on 12/10.”

When asked about the City’s concerns, Jeff Gold, Chairman for the Board of County Commission, referred back to the December 1 board meeting and said “the County commission discussed its plan for CARES Funding to assure every dollar spent was done based on the needs of all Marion County citizens and in their best interests. Without knowing the hardships our community might face in the coming year due to COVID-19, and without having fully reimbursed the CARES-related projects we have committed to, we feel confident in our decision to place some of the reimbursed CARES funds in reserve to meet the future needs of everyone in this community.”

Gazette staff will be issuing a follow up article summarizing with greater detail how the CARES act funds have been expended locally thus far.