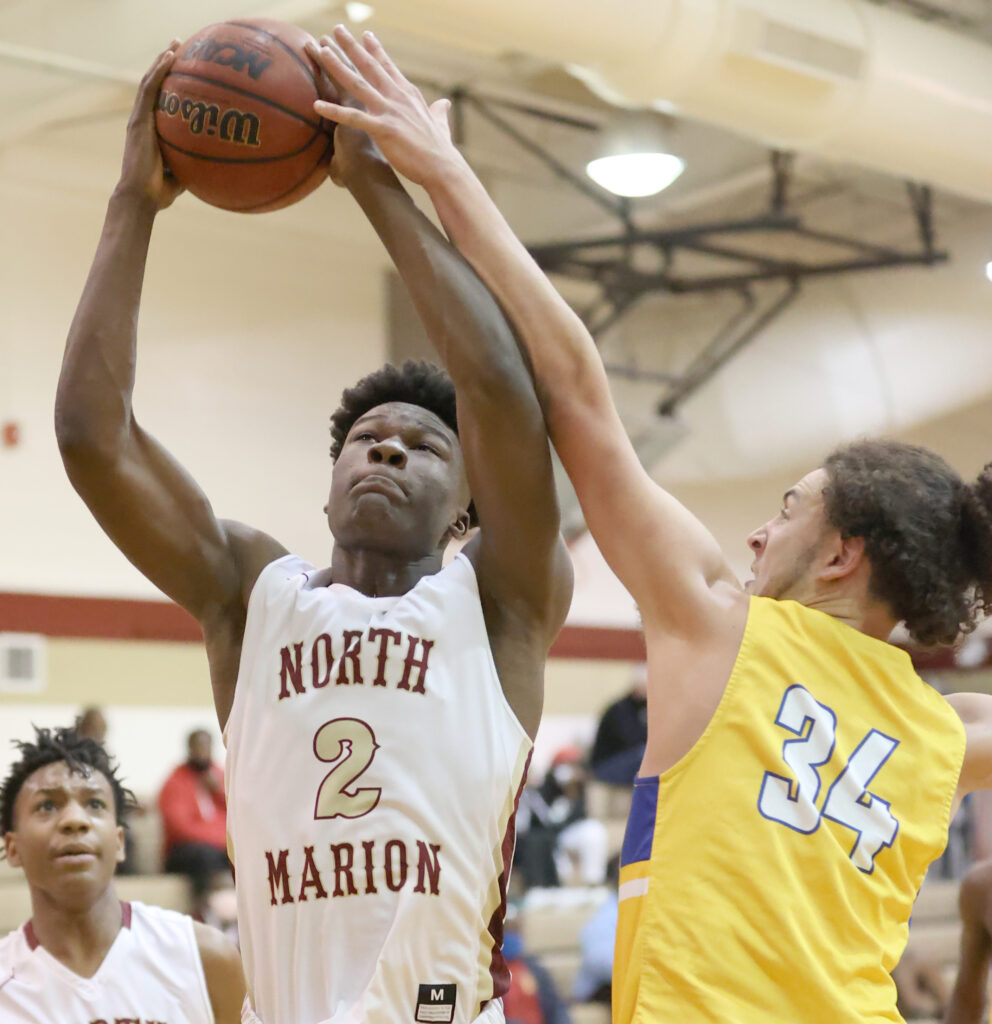 North Marion’s Elija Walton (2) drives to the basket as he is defended by Crystal River’s Dennis Samples (34) during a basketball game at North Marion High School in Sparr, Fla. on Tuesday, February 2, 2021. North Marion won the game 81-35. [Bruce Ackerman/Ocala Gazette] 2021.

North Marion’s Elija Walton (2) drives to the basket as he is defended by Crystal River’s Dennis Samples (34) during a basketball game at North Marion High School in Sparr on Tuesday. North Marion won the game 81-35. [Bruce Ackerman/Ocala Gazette]

North Marion’s boys’ basketball entered Tuesday night’s matchup against a struggling Crystal River squad in the middle of a prolonged slump.The Colts had lost seven games in a row, including four losses by 11 points combined.In the opening eight minutes, North Marion looked exactly like a team coming off seven straight losses, as the Colts led the two-win Pirates by just three points.

From there, however, North Marion dominated. The Colts pounded the Pirates for the next 24 minutes, outscoring them 64-21 the rest of the way en route to an 81-35 blowout.

“Definitely the win that we needed going into districts,” North Marion coach Timothy Yarn said. “Feel better than losing seven in a row, so it feels good, feels good to get one.”

The Colts did not relent coming out of halftime, outscoring Crystal River 26-10 in the third quarter. Freshman Sammie Yeanay was unguardable all night long, as he and senior Jaden Burton both had double-digit points. North Marion’s height was also a problem, as the Colts dominated the glass and put home second-chance opportunities.

Tuesday night’s game was the first of two games on back-to-back nights for North Marion (7-8), who faces Williston at 7 p.m. on Wednesday night for Senior Night before taking on Vanguard at 6 p.m. on Saturday to close out the regular season. Crystal River (2-17) is set to play Williston at 7 p.m. on Thursday and Dunnellon at 7:30 p.m. on Friday to finish its regular-season slate.