New gallery is in step with Ocala’s artistic evolution 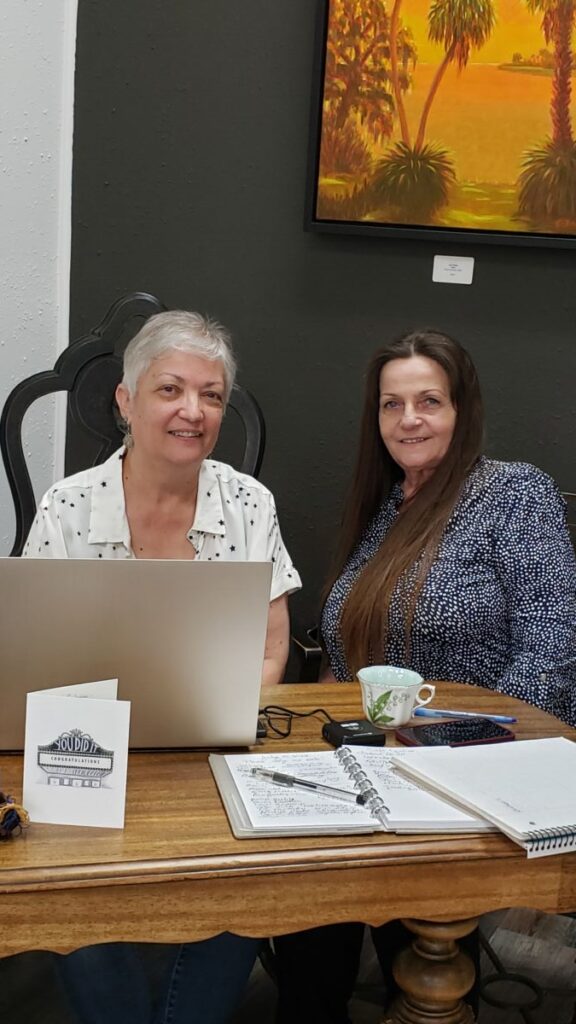 Ocala’s art scene has offered one surprise after another lately. Those new to the area can only imagine what lurks behind the rural veneer of the otherwise low-key community.

Take, for instance, an unassuming strip mall on Silver Springs Boulevard, a short distance from the Appleton Museum of Art.

Chelsea Square features some of the most distinctive businesses in the area, from the well-reviewed brews and bites of Chelsea Coffee Co. to the treasure trove of the Vintage Toy King. Just a few steps from Designs by Daniel, a unique stained-glass studio, you’ll find the newly opened CC Fine Arts Gallery.

The gallery stakes its claim in the local art scene with a coterie of artists who bridge accessibility and sophistication in their highly wide-ranging and skillfully rendered works.

“We wanted elegance but not stuffiness,” said co-owner Carlynne Hershberger. “We wanted people to be comfortable coming in and an eclectic mix of contemporary and traditional fine art.”

Hershberger, along with co-owner Cheryl Ritter, and their crew, had to remove two offices and four walls to open up the 2,500-square-foot space. They removed a door that opened up the largest space to make Galleries 1 and 2, and they left one of the offices in place to use as a smaller space, Gallery 3.

The artists whose works are on display hail from Ocala, Orlando, St. Augustine, Tampa and Fort Myers.

Robert Goodlett’s landscapes convey a melancholy and dreamy beauty. If you were to imagine what Edward Hopper would paint if he set up an easel in front of a rural Florida farm, then you’d have an approximation of the tranquil and moody settings in Goodlett’s works.

Other pieces include the expressive horse sculptures of award-winning artist Mindy Colton, the otherworldly designs of Amy Lennard Gmelin and the graceful woodwork of Jeff Matter. 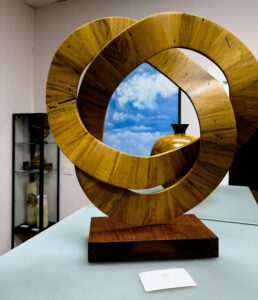 Ritter, whose stirring and expressionistic landscapes also hang in the gallery, has shown her work at art fests throughout the state, which connected her to artists with far-ranging styles in all media, who sell their works at a range of price points. Those friendships led to the collective whose works are now on display at CC Fine Arts.

“Carlynne and I came together at Gallery B as co-owners and we just started talking a lot about our goals and what we do and who we are, and we formed a bond there,” Ritter said. “I couldn’t imagine anyone that I would want to open a gallery with other than Carlynne because I could share my vision with her and vice versa. It was like she was inside my head. So, we are very connected in our goals and our thoughts for the future for this gallery.”

Both Ritter and Hershberger moved here from colder climates, Ritter from Buffalo and Hershberger from Jersey City. They met the way so many local artists found each other, during the Horse Fever public art exhibition, which recruited artists to paint horse statues that were then placed throughout the city.

Hershberger said she finds inspiration in nature and grew up in a creative family – her mother, grandmother and uncle were painters. In her early career, she honed her craft by illustrating fashion designs and her work has garnered multiple awards. She also co-authored the book “Creative Colored Pencil Workshop.”

Speaking of birds’ nests, Hershberger has received renown for her nest paintings. 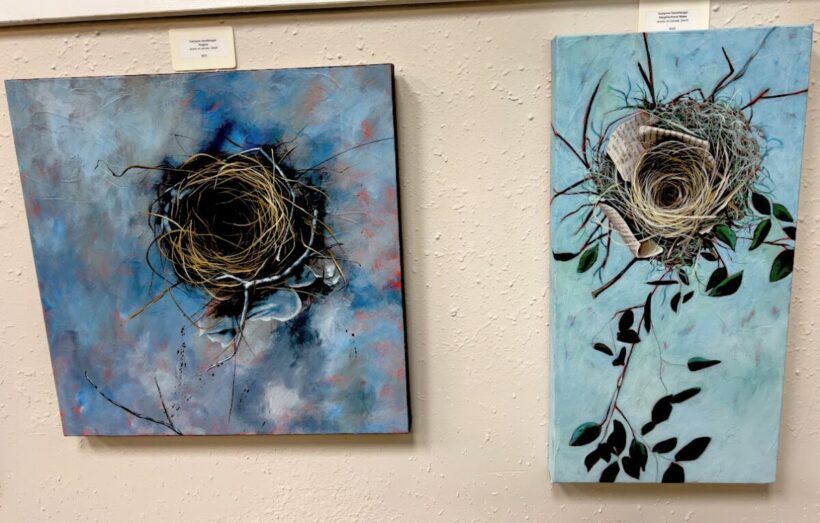 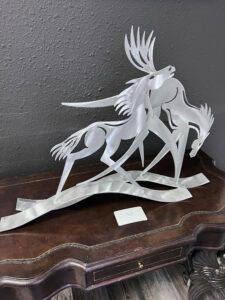 Her “Nests” series has included nearly 100 acrylic and mixed media pieces. It all started years ago when a family of wrens built a nest in her mailbox.

Her husband, Mark Hershberger, also an artist, designed the logo for the gallery, which features hallmark characteristics of Ocala: Horseshoes fashioned into two letter C’s and floral vines entwining them to represent the abundance of nature in Ocala.

When Ritter moved here in 1980, she worked in industrial cleaning, such as a post-construction clean-up at the Appleton Museum of Art. She met the then curator there and learned about the museum’s collection and place in the community, which led her to other artistic paths, including the Horse Fever competition and the Marion Cultural Alliance.

“I’ve been here long enough to watch and to see the evolution in cultural growth, and we’re here to continue that growth,” Ritter said.

“And that’s why we’re so excited about the gallery,” she added. “Because we feel that we can be a part of that evolution, be a part of its history.”