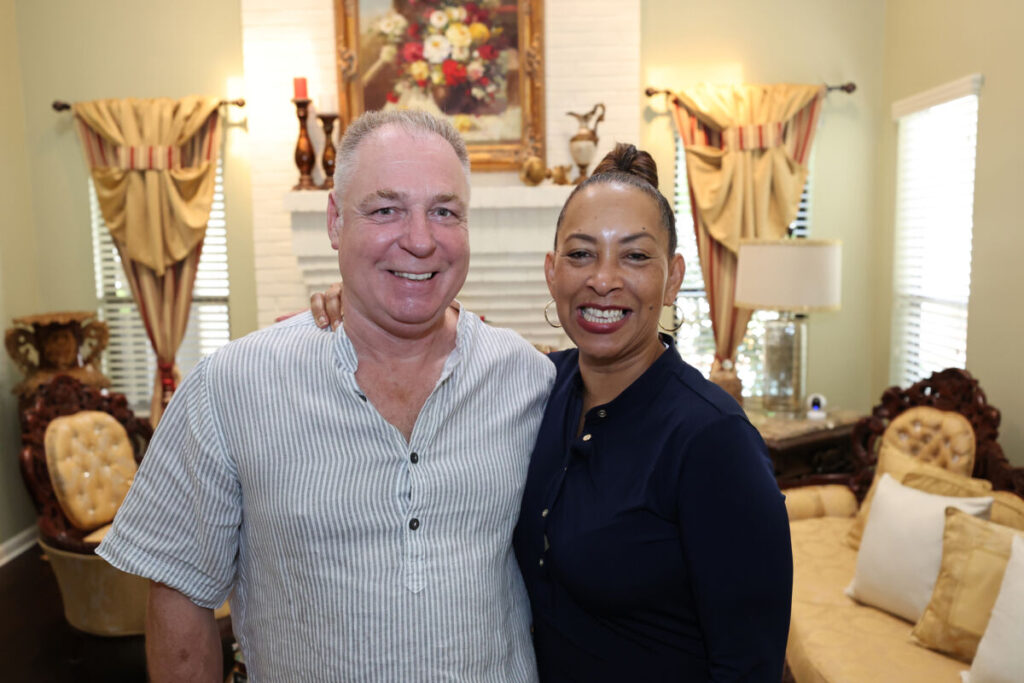 The love story of Rosa and Manfred Schmid spans two continents, two languages and 32 years. It began on social media and progressed to Ocala.

Rosa, who has an outgoing personality, was born in the Dominican Republic. She said she went on Facebook one day in 1988 just to browse and saw a post by Manfred Schmid that piqued her interest. His residence was in Germany. She responded to his post. He was interested and took a vacation to the Dominican Republic and the two met on a bus trip. After he returned to his country, they continued to correspond via social media.

About a year later, Manfred invited Rosa to visit him in Hamburg, Germany, to meet his family. She stayed there for three months before she returned home.

Manfred took another trip to see Rosa, then returned to Germany.

Rosa said that although their connection seemed strong, the long-distance relationship “just didn’t work” and they lost contact with each other.

Four years later, Rosa married and started a family that grew to include four children. She earned a certification in cosmetology and worked in that field. She and her husband left the Dominican Republic and moved to Boston, Massachusetts, for his work. Their children, two males, now ages 36 and 38, live in the Dominican Republic, and two females, ages 23 and 27, both live in the Boston area.

While in Boston, Rosa became a United States citizen. She also furthered her education by earning a degree in interior design and had her own cosmetology studio. She and husband divorced while in Boston.

Manfred had had a 16-year relationship that ended before he met Rosa and has a son, now 37, and a daughter, 42, who both live in Germany.

“I could not get him (Manfred) out of my mind,” Rosa said. “I tried to find him again on Facebook.”

She had no luck at first but persevered in her search. At last, she received word on the social media outlet of two men named Manfred Schmid. She texted to both names and one of them returned a message asking, “Is this Rosa Amada Diaz Romero?”

He knew her whole name, so she knew it was him.

“That was the most exciting day of my life,” she exclaimed.

It was May 26, 2018. Rosa is very explicit about all the dates that are important in their relationship.

Manfred lost no time and visited Rosa in Boston the following July. He went back to Germany but was back in the United States by October. The two were married in December 2018.

One would think that would be their happy ending, but there is more to the story.

It normally takes about a year to get an interview to get paperwork in Germany to move to the United States as a permanent resident. Manfred had to return to Germany to begin the process. The COVID-19 pandemic began to rage all over the world and the interview was postponed an additional year, scheduled for 2022.

“I was so upset. I was bordering on depression,” Rosa said. “He was gone so long. I felt like I was losing him all over again.”

Rosa decided she had to do something so, on Aug. 19, 2020, she wrote a letter to the American Embassy in Frankfort, Germany, and pled their case.

“I am so upset,” she wrote. “I do not want to be here without my husband. I miss him terribly and it is affecting my health.”

Embassy officials answered her letter right away and said they were doing everything they could.

On Dec. 4, 2020, Manfred received permission to move to the United States as a permanent resident. He and his bride moved from Boston to Ocala eight months later, after visiting other areas, including Clearwater.

The two said they knew they were happy with what they found in Ocala. Manfred said when they bought their house in the northeast part of Ocala, he walked into the backyard, looked around and said, “Thank God for allowing me to move to paradise.”

“We looked at other places, but always came back to Ocala,” Manfred said, then added, “In Ocala, there is everything you want.”

The couple has traveled extensively since then, including visits to Germany and the Dominican Republic to see family. They are planning another trip to Germany soon to attend a wedding. One thing they would like to see, given that they travel so much, is a “big airport closer to Ocala.”

Manfred is a retired engineer who loves to cook, with pastas and breads being his specialties.

“You should taste his vegetable stir-fry,” Rosa noted.

Rosa, who works in a salon in southwest Ocala, said when they return from Europe she plans to begin working to open her own hair salon.

Manfred and Rosa both said they appreciate the natural beauty they find in Ocala and all the history here. They said they love the neighborhood where they live, the trees, the weather and the town.