The Spring Has Many Silences

The spring has many sounds:

The wind forgets to be the weather for a time

And whispers old advice for summer.

The sea stretches itself

And gently creaks and cracks its bones….

The spring has many silences:

With a discreet significance,

And buds say nothing.

There are things that even the wind will not betray.

Earth puts her finger to her lips

And muffles there her quiet, quick activity….

Do not wonder at me

That I am hushed

This April night beside you.

The spring has many silences. 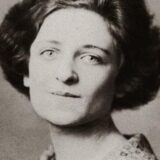