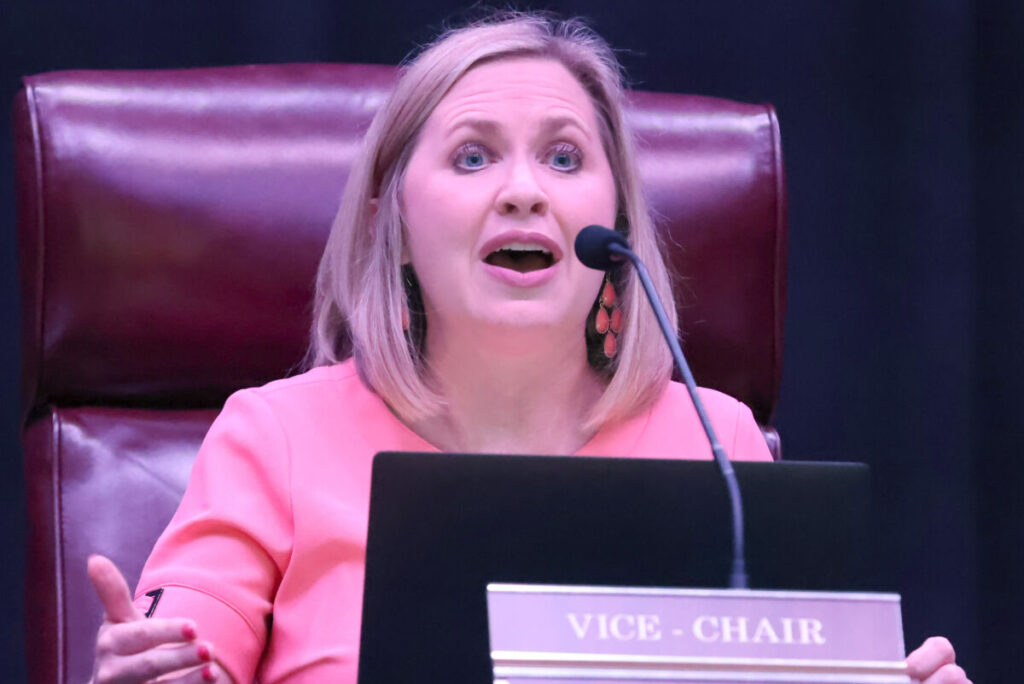 Vice Chair Allison Campbell speaks during a meeting of the Marion County Public School Board at the MTI auditorium in Ocala, Fla. on Tuesday, April 26, 2022. [Bruce Ackerman/Ocala Gazette] 2022.

The Ocala City Council once again voted unanimously Tuesday, April 19, to postpone approval of a multifamily residential development located on the east side of Southwest 43rd Court in the 3600 block, across from Saddlewood Elementary, until May 3.

Council postponed a vote in order to allow all the development agreements involved in the proposal time to get in place. There were also many concerns regarding road improvements that needed to be in place in the developer agreements before proceeding.

“Nothing happens until we start getting the road improvements. That’s all we’re looking for. We need those improvements to happen before we even take on any of the builders and all that type of stuff. We want to make sure it gets fixed as best we can,” said council member Jim Hilty.

City Attorney Rob Batsel Jr. told council he would appreciate a two-week postponement. “I will be fully prepared to address a lot of these concerns holistically [by then],” he said.

The development proposal comes from applicant Catalyst Development Partners II, LLC, a company based out of Georgia. It received two publics hearing on March 1 and March 15, before being pushed to April 19 for a vote—only to be pushed once again.

Council was considering a development agreement that would approve the 26.63 acres of property for a zoning change to “R-3 Multi-family Residential,” specifically 15 acres to the south of the property, which allows a maximum of 12 units per acre. The remaining 11.63 acres not included in the sale contract will be reconsidered for zoning again in the future.

The city had anticipated the future land use for the property to be “Medium Intensity/Special District,” which would allow for a minimum of five units per acre and a maximum of 30.

City staff has expressed concerns about congestion in the area, according to city documents, specifically a lack of transportation infrastructure to accommodate the potential level of development.

The applicant’s representative suggested that the concerns could be worked out through a custom developer’s agreement that would allow the city to address future development of the property and potential traffic studies, roadway and intersection improvements such as adding signalization.

Saddlewood Elementary, Liberty Middle School and West Port High School are zoned to serve students who would live on the proposed property. All three schools are experiencing persistent localized overcrowding, according to city staff, noting that the district has capacity to move students to other local schools if need be.

The school districts’ capacity is 85.5% district wide, according to city officials. This is below the state capacity of 87.5%. Ultimately, city staff reiterated that the school district is responsible for addressing localized overcrowding.

City staff said on April 19 that the school board is part of the planning and zoning commission, adding that one of the main issues of note brought up often at these P&Z meetings is school concurrency, or a system of land use regulations designed to meet the demands placed upon public school capacity by a new residential development.

“We had school concurrency back in the 2008 to 2010 period, but it went away,” said Tye Chighizola, director of Planning and Development for the City of Ocala. “The state did not require the cities or the counties to have school concurrency, so we don’t really have it.”

Chighizola explained that city staff couldn’t recommend that there’s no capacity at any given school without looking at capacity for that entire district.

“And there is plenty of capacity district wide,” he said. “Many schools may be overcrowded, but our hands are tied from our standpoint. We have to look at capacity for the entire district. But we are having a conversation with the school board about that and how it could be addressed in the future.”

Currently, the school board’s job is to look at the Marion County birth rate data, as well as other data and trends, to determine school district capacity, said Chighizola, adding that those numbers “really show what the growth is.”

“You may think there’s a lot of movement and everything but theoretically even during the times in the boom there was only a slight movement,” he continued.

School Board Vice-Chair Allison Campbell, who represents District 1, said on April 27 that it wasn’t just the development across the street from Saddlewood Elementary that is the issue: it’s many of the other apartment complexes approved or proposed to go up just a mile or two down the road as well.

“We’re talking about potentially a thousand units…750 units at least…and to think that that’s not going to [cause] a capacity issue on that elementary school is…well, I don’t think that’s accurate information,” Campbell said.

Developers admit to the presence of capacity issues while still contending that the Marion County birth rate has not changed much over the last several years, said Campbell, adding that this way of thinking doesn’t project future challenges of where these developments are going and how they will contribute to the growing issue of localized overcrowding.

“It’s no longer a requirement, and it hasn’t been for years,” Campbell said. “Impact fees and concurrency are all conversations that haven’t been had in a really long time.”

“Would it help us? Certainly,” she added. “Is it too little too late? Possibly. We’re just going to have to figure out what we’re going to do.”

The school board has scheduled a work session for May 19, according to Campbell, to discuss development in Marion County and its specific effect on capacity and overcrowding in local schools.

Kimberly Sindy said from her perspective it seemed that the city wanted to build three to four apartment complexes close to where she lives off Southwest 44th Court.

“I don’t know about you ‘all, but I am tired,” she said during public comment on April 19. “Our children have not had a good education in the past two to three years. Can we just have a break?”

Sindy said she didn’t think State Road 200 could handle the extra traffic that would be brought on by these proposed developments, adding that “20,000 new cars” are just going to end up cutting through her neighborhood and making her streets more dangerous.

Cindy Janeiro of Southwest 44th Street said she was also tired of fighting the development of so many apartment complexes in her neighborhood.

“According to the planning and zoning committee meeting a few weeks ago,” Janeiro said, “neither planning and zoning nor the city council look at school capacity when determining whether or not to approve developments such as this one and others like it.”

And when they do take into consideration school capacity, Janeiro said, city staff goes by the school board’s future projections, which, she added, are based solely on the birth rates in Marion County.

“Those numbers do not take into consideration the families moving to Marion County, and there are a ton of them every day,” she said.

Janeiro concluded her comments by asking the council to decline approval of the current apartment complex on the agenda, and any others like it going forward.

“I hope you understand that you’re truly going to affect our lives and the lives of our children,” she said. “We all purchased our homes in this community because it was safe, and it was zoned agricultural and residential and was so close to everything but still had privacy. If you allow this development [to go through], you’re essentially destroying southwest Ocala.”

“We are who you guys are supposed to be working for,” she finished, “not these out-of-town developers who don’t [care] about Ocala. Our infrastructure can’t handle it. Our schools can’t handle it. Our children, who walk home from Saddlewood right by these proposed apartments, shouldn’t have to handle it either.”