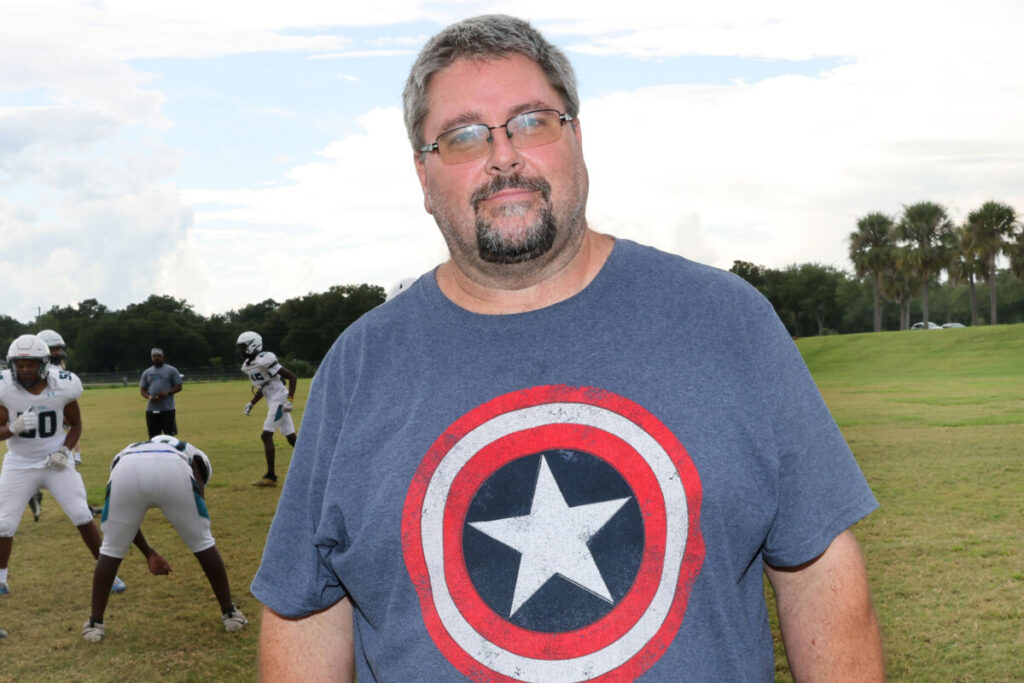 Greg Harper knew from a young age that sports was a true passion and did his best to play as many as he could. Football, baseball, basketball, it did not matter to the new head coach of the West Port High School football team.

Harper’s father, a baseball and football player in high school, brought up Harper and his siblings in sports. The early years of Harper’s athletic career were not easy and was more of a trial-by-fire.

“I was always a big kid and I had to play up a league because if you weigh so much, you move to the next level,’’ he said. “So, I was always playing with guys who were like four years older than me, and I got beat up quite a bit early on.”

Fortunately for Harper, he eventually was able to play against kids his age and he started to excel and have fun. Football quickly became his favorite sport.

“I love being a part of a team,’’ he said. “Being in a huddle with 10 other guys with a common purpose to go against those other 11 guys across from you always appealed to me. I liked having a bunch of brothers going after it on a Friday night.”

The lessons from his youth football days have translated over to his coaching philosophy.

“I believe you can teach kids to be tougher because I learned how to be tougher as I went through that process of (facing) kids who were more experienced than me. Learning how to handle yourself against older kids was a learning process, and you have to persevere through all of that,” he said.

Harper has had to adapt to new challenges and surroundings his whole life. His family lived in Michigan, Texas, Kentucky and New York before moving to Gainesville when he was 8 years old. The football-crazed college town became his semipermanent home. Harper played football at Buchholz High School, where his team won a state championship in 1990.

The tenure at Williston lasted one year and he landed at West Port in January to take over a program that has a 10-28 record over the past four seasons. Despite the challenging task ahead, Harper said he welcomes the journey that comes with starting from scratch.

“I have coached against West Port before and always thought they had really good kids,’’ he said. “I know the history is not great, but I’ve been to places that have been like that, and we’ve been able to have some success. I just thought it was a great opportunity for me and my family.”

Harper said his wife and three daughters have been very supportive of his career, and he could not do it without them. All three of his daughters have served as ball girls or film reviewers and he has always enjoyed having them around his teams, he said.

Harper said he has a plan for how to bring more on-field success to the Wolf Pack program.

But the training extends to the classroom.

“I expect them to keep their GPAs up,’’ he said. “I tell them all the time that if you show me your grades, I will show you your future. A lot of kids don’t understand that, and I think they should because there are plenty of resources that show if you don’t have the grades, they’re not going to get to play for the school they really want to, so we’re going to be on them year-round.”

Harper is a big believer in turning the page and always pushing forward. He will have to keep a constant eye on the pulse or morale of the team because creating a winning culture is not easy and small setbacks can snowball quickly.

“You have to have a team that gels together and understands that this whole thing is part of a process, and every week is a new challenge,’’ he said. “So, if things don’t go our way, that does not mean we can’t turn the corner and have some success the next week.”

Harper’s 39-year career as a player and coach has been a collection of memories and valuable lessons, but one thing that sticks in his mind and that he tries to pass on to his players is to enjoy the journey and soak in the memories.

“Try to enjoy the process as much as possible, and that’s probably preaching to me more than it is to some of my kids that I’ve coached over the years,’’ he said. “Sometimes, I get too caught up in the results and not just enjoying the process of being with the kids and seeing them get better. I’ve learned it over time, but I don’t necessarily always show that I learned it. Life is short and we only got so much time together, so to just enjoy the process.”

Harper said the goal this year is to break the program’s record of five wins and possibly make the playoffs. Beyond the field, Harper is taking his own advice of taking everything in while leading and developing a group of young men.

“Really looking forward to seeing the growth of the kids and seeing them win,’’ he said. “I like winning, but the older I get, the more I like winning just to see the kids enjoy it. I ask a lot of our football kids, I have them working really hard and to see all that hard work pay off and see the joy in their faces. I like to see that more than anything else in the world, to just see them enjoy what they’re doing.”