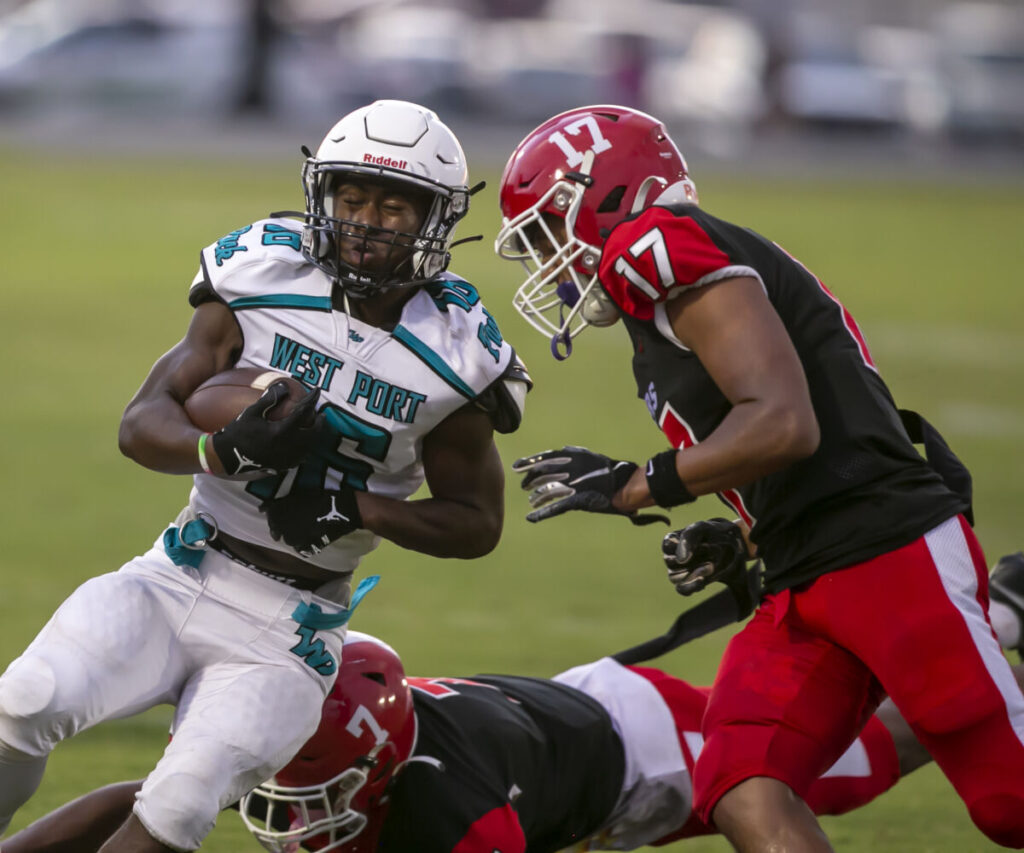 It was a battle of first-year head coaches Greg Harper (West Port) and Thomas Sutton (Dunnellon) at Ned Love Field on Friday night.

The Tigers got off to a fast start after blocking a West Port punt on the fourth play of the game and senior linebacker Gavyn Leinenbach returned it 40 yards for a touchdown. The Wolfpack would answer back in the second quarter on a 40-yard touchdown pass from sophomore quarterback Brittin Stevens to sophomore wide receiver AJ Weaver.

Another special teams’ miscue by the Wolfpack allowed the Tigers to start at the West Port 10-yard line and freshman quarterback Dylan Curry hit junior wide receiver Chris Henry for a 10-yard touchdown to take a 13-7 lead at halftime.

The game remained in a defensive stalemate before junior running back Amari Francois busted loose for a 70-yard touchdown run to give the Tigers a 20-7 lead they would not relinquish. Both teams played superb defense and both coaches were ecstatic with the performances.

“I just really like where our defense is right now by playing together and they’ll keep doing a good job for us as the offense works through some growing pains, just proud of those guys.,” Harper said.

“Proud of our overall effort and finding a way to win. We talked all week about being 1-0 for the week.,” Sutton said.

Regardless of result, both coaches are eager to get back to practice and continue to improve the team as the season goes on.

“I love our kids; we got some good kids, and we got a young football team, and the future is very bright for West Port. We just have to continue to work and believe that things are going to get better.,” Harper said.

For Sutton, the Dunnellon alum, it was a humbling honor to get his first win as head coach of the Tigers, but the mission is just beginning for his squad and it’s back to work on Monday.

“They understand the work that has to be put in Monday through Thursday to be successful. We will celebrate this one for 24 hours and move on to prepare for North Marion.,” he said.

West Port hosts Winter Springs next Friday and Dunnellon will be hosting North Marion in a big non-district showdown between county rivals.