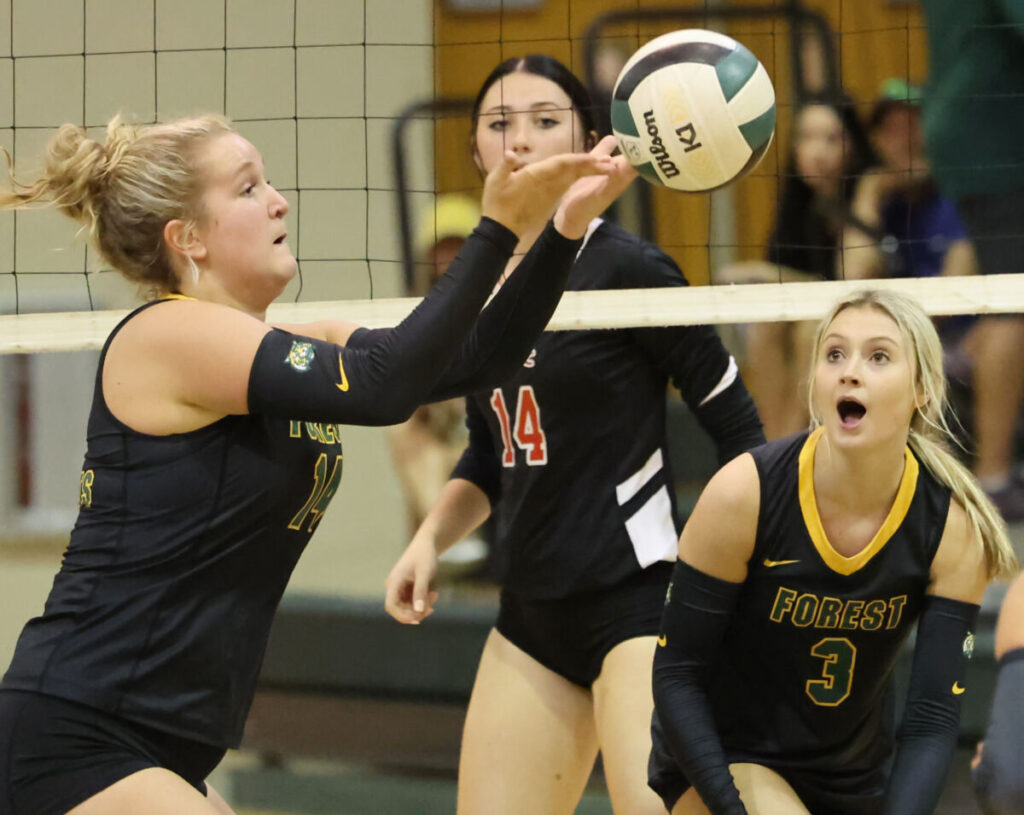 Forest’s Gracie Martineau (14) tries to make a save as Forest’s Alyssa Gomillion (3) looks on with Leon’s Della Poole (14) during a volleyball match at Forest High School in Ocala, Fla. on Thursday, August 25, 2022. [Bruce Ackerman/Ocala Gazette] 2022.

Talk about starting the season off with a bang. The Forest volleyball team, which lost nine players to graduation off last year’s state qualifier and has only one senior on this year’s roster, proved it could be quite formidable this season despite its youth and inexperience with a convincing win over Leon by scores of 25-27, 25-13, 25-15 and 25-21 on Thursday night.

The hard-fought victory was extra sweet for the Wildcats after losing to Leon (Tallahassee) in the Class 6A regional quarterfinals last year.

“I am so proud of this team,” said veteran Forest coach Jimmy Collins. “The girls have been working hard in the preseason and I’m really happy for them that we started out with a win against a good program like Leon. We’re a brand new squad and as a coach it is so much fun starting over with a new group of girls. We were up 24-22 in the first set and let it get away from us because we were so nervous. We have four freshmen playing a lot and after that we really settled down and played well. Playing matches like this shows where we are and where we need to get better. Now that we’ve won, I’m glad we had to fight through some adversity after losing the first set.”

Leon, which lost a number of players off last year’s team which lost in the regional finals, came out strong in the first set behind the solid net play of junior outside hitter Amelia Haggins and senior middle hitter Sydni Hunter.

Forest led 24-22 before several Wildcat errors allowed Leon to tie the score at 25. The Lions took full advantage as Haggins drilled a pair of ace serves to take the first set.

The loss seemed to spur Forest to play at a higher level as the Wildcats stormed out to a commanding18-7 lead in the second set as juniors Ava Keuntjes and Dallas Papy each had several kills and sophomore Avery O’Cull had a pair of nice blocks.

Leon had no answers for the Forest offense and Papy, who had eight kills, drilled a cross-court spike to give the Wildcats a 25-13 win to even the match.

Forest jumped on top by a score of 19-12 in the third set as freshmen Allison Hamm and Gracie Martineau took turns finding holes in the Leon defense with powerful kill shots.

The Wildcats continued to pour it on, much to the delight of the raucous crowd and student section, as junior Kailyn Howard scored at the net and O’Cull finished the set off with a nice dink shot for the 25-15 win.

The final set was a back-and-forth affair with Forest taking an 18-13 lead, but Leon refused to fold and rallied behind Haggins and Hunter to pull within 20-19.

Forest responded as Howard, who had a team-high 10 kills, scored points with a dink and a spike. A net violation against Leon and a service ace by sophomore Ava Herren put the Wildcats at match point. A long rally ensued before a perfectly placed dink shot by Keuntjes gave the set and the match to Forest.

“Our leader is Ava Keuntjes,” coach Collins said. “She could be our libero, but she’s such a good setter. She is a team player and will do whatever I ask her to do. Kailyn Howard had a really good game and Dallas Papy played well.”

This kind of win gives Forest a shot of confidence as it prepares for Saturday’s away match at state powerhouse Chiles (Tallahassee).

“This was a good win for us and now we play Chiles on Saturday which is one of the best teams in Class 6A,” coach Collins said. “They are really strong this year and that’s how you get better is playing really good teams.”