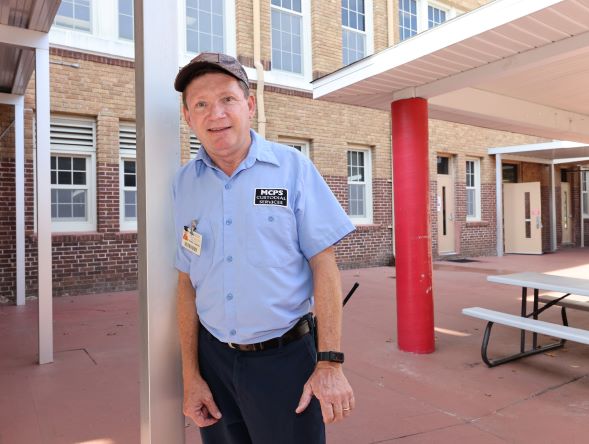 Tom Eubanks pose for a photo in a courtyard at Eighth Street Elementary School in Ocala, Fla. on Wednesday, August 24, 2022. Eubanks has worked in custodial services at the school for 16 years and the parent teacher organization has started a GoFundMe to help raise enough money to buy a golf cart for him to work with on the campus. [Bruce Ackerman/Ocala Gazette] 2022.

All the custodial duties at Eighth Street Elementary School fall on the shoulders of one man—and now the community hopes to pay him back for his hard work with a fresh set of wheels.

Thomas “Mr. Tom” Eubanks, a beloved custodian, has had the Eighth Street Parent-Teacher Organization (PTO) rally around him as they attempt to fundraise $4,500 for a golf cart of his very own, so that he may zip around campus to fulfill his wide array of responsibilities and upkeep the elementary school’s campus.

“He has to share a utility cart with Osceola [Middle School], which is right next door to Eighth Street,” said Shanta Matthews, a local attorney. “Between the two of them, sometimes he’s able to use it—other times, he’s not.”

Matthews has taken up the charge to lead fundraising efforts by the PTO. She said that getting Eubanks his own golf cart is not only a necessity, but it is also long overdue after his 16 years of employment at the school.

“He requested at the beginning of last school year if there was any way possible for him to have his own designated utility cart, that way he could use it every day and get around the school more effectively to do his job,” Matthews said.

Eubanks said he has a wide array of responsibilities to fulfill, including opening and closing the school each day, cafeteria duty, moving the grass, landscaping, cleaning and sanitizing the school.

“I’m there for the kids,” Eubanks said. “That’s what it’s all about, is making sure that they have a safe and clean environment.”

In addition to the plethora of shoes he fills, Eubanks also has a pivotal role in maintaining security and ensuring the safety of the students. Eighth Street recently installed a security gate that surrounds the entire campus, which Eubanks has to walk back and forth from many times a day without the aid of a golf cart of his own.

“It would be easy access to lock the gates. We have a new gate, or fencing, around the whole school. I have to unlock the gate for the bus, so it’ll be easier and quicker to move around campus.”

He is described as not only an excellent custodian, but also a smiling face for the students and a reliable person for teachers and parents alike to depend on, Matthews said.

“Mr. Tom is extremely friendly and reliable. Anything you ask Mr. Tom to help with, he does,” Matthews said. “Whenever we have events, whether that be a 5k, or bike rodeo, those things happen outside of normal business hours. Tom gets there and he helps.”

Eubanks said that the feeling is very mutual, and he has enjoyed his many years of service at Eighth Street and looks forward to many more. He expressed his gratitude for the many people who have donated to help the PTO reach their goal and purchase him a cart.

“I always consider Eighth Street as my second family,” he said. “It means a lot that they would go out of their way and do something like this for me.”