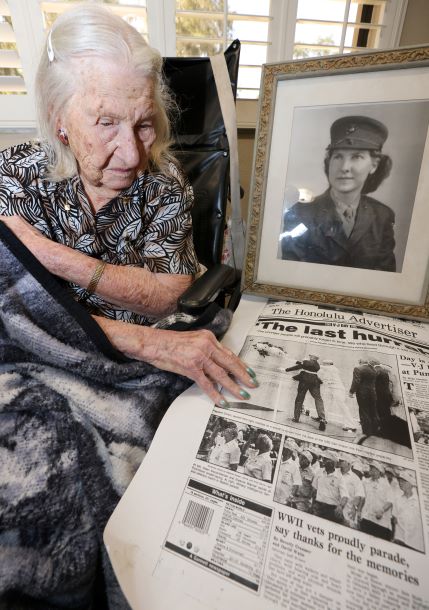 Helen Bonomini, 100, looks over an old edition of the Honolulu Advertiser as a 1943 photo of herself when she was 21 and serving in the United States Marine Corps, is shown at Brookdale Paddock Hills in Ocala, Fla. on Thursday, Sept. 22, 2022. Bonomini, a veteran, will celebrate her 101st birthday on Oct. 10. She proudly served in the United States Marine Corps from 1943 to 1945. [Bruce Ackerman/Ocala Gazette] 2022.

Helen Bonomini, with her manicured nails brightly painted, is still quick to throw up a snappy U.S. Marine Corps salute, accompanied by a sly smile. Her smile deepens as she gazes at a large black and white photo of herself as a Marine, in which she looks regal and determined.

As she nears her 101st birthday, on Oct. 10, Bonomini maintains a deep sense of pride for her military service.

Her niece, Jean Winkler, of Ocklawaha, said her aunt was among the first group of women to enlist in the Marine Corps Women’s Reserve in 1943 and served for two years.

“Actually, she will tell you it was something like two years, two months, 13 days and so many hours,” Winkler said.

According to the U.S. Marine Corps website, Opha May Johnson became the first female Marine in 1918, at age 40. By the end of World War I, women were relieved of their duties in the corps and were not allowed to join again until World War II. On July 30, 1942, the Marine Corps Women’s Reserve was established to provide women for duty at shore establishments, releasing men for combat duty. The female Marines were assigned to more than 200 jobs, such as radio operator, photographer, parachute rigger, aerial gunnery instructor, cook, quartermaster, control tower operator, auto mechanic, telegraph operator, cryptographer, post exchange manager, stenographer and agriculturist.

Winkler said her aunt, who was great at math, was stationed at Quantico, Virginia, and primarily handled officer payroll. After she left the service, she said Bonomini volunteered for years in a Veterans Affairs office that offered free tax service for veterans.

In 1995, 50 years after her service ended, her aunt was featured on the front page of the Sept. 3 issue of the “Honolulu Advertiser” saluting during a memorial in Waikiki, Hawaii, at a service marking the 50th anniversary of the close of World War II. A large printout of that page remains among Bonomini’s most treasured pieces of memorabilia.

Winkler said her aunt was born was born Helen Elizabeth Adams, in 1921, to a peach farmer in Centralia, Illinois. Her family moved to Boynton Beach when Bonomini was a child and that also is where Winkler grew up. She said her aunt has credited her long life in part to a diet that includes a lot of fresh fish and that when her aunt was a child, she would accompany her mother and father on fishing trips.

“They would walk out on the side of the lake and use the cane poles and the bobber and fish like that. They would come home and my grandmother would fry up 50 little crappie; they could really catch them back then, on earthworms they dug up in their backyard,” Winkler recalled. “She still loves fish. Tilapia is her favorite.”

Mel Winkler, Jean’s husband, said Bonomini “has always been the type of aunt that you didn’t see for years, but you wanted to, and then she would show up. She never had children so when she would get around Jeanie it was really special.”

After Bonomini suffered health challenges in 2014, the Winklers brought her from south Florida to live at Brookdale Paddock Hills in Ocala. They had been volunteers who brought therapy dogs into assisted living facilities, so were familiar with the venue, which back then was Emeritus.

“Miss Helen is one of our oldest residents in our memory care community. She enjoys singing. She is an avid dancer; even today. She is phenomenal and motivates the other residents. She is amazing,” said Joelle Watkins, Executive Director II, at the facility, who added that Bonomini “won’t go in her room unless she sees her ‘Women’s Veteran’ cap on the table.”

On a recent day at the property, the Winklers visited with Bonomini and recalled how, until the pandemic, she would make a knitted cap, “365 days a year.”

“I bet she made 300 or 400 knitted caps that she gave to everybody here. We give them to different places,” Mel noted, to which Jean added. “We gave them to Interfaith, by the hundreds, and they loved it because every winter they wanted people to keep warm.”

Interfaith Emergency Services is one of the leading social service agencies in Marion County and provides assistance to large numbers of people who are in need or lack housing.

Winkler said administrators at Brookdale Paddock Hills are planning a nice celebration on Oct. 10 for her aunt’s birthday and that she was looking forward to everyone making a fuss over her loved one.

“She’s a character,” Winkler said with a bright smile.

Winkler added that her aunt, who was married to the late Ray Meisenheimer for nearly 50 years, and later to Salvatore Bonomini, who died in 2012, told her that she outlived both of her husbands because “they were only Army guys, not Marines.”