Bob Zelinski: A leader and educator whose impact goes beyond the field 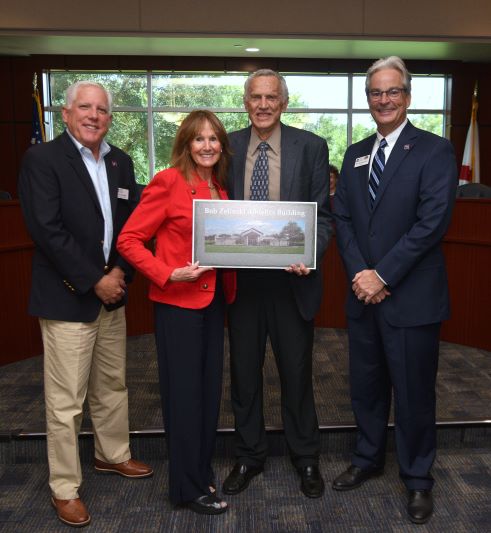 For recently retired College of Central Florida athletic director Bob Zelinski, being in an authoritative position does not always mean taking charge. And that, he says, is a key to becoming a great leader.

“Never forgetting that you’re there to lead, but you’re also there to listen. One of my strengths was that I heard people and was always willing to listen,” he said.

He added, “Hear what the issues are, go and find solutions for those and then find the right people who you can work with to inspire and move forward.”

The 75-year-old Miami native has always been goal-oriented. He started in Boy Scouts as a youth and worked his way up to the Eagle Scout rank before attending Miami Edison High School. After graduating from high school in 1965, Zelinski moved on to Miami Dade College.

According to Zelinski, he had every intention on continuing his basketball career in college but he realized his skillset was not good enough and moved on from it. During his time at Miami Dade, he began lifeguarding on campus.

He would move on to Florida Atlantic University, where he would earn his bachelor’s degree in elementary education in 1971. During his time at FAU, Zelinski began working for Dade County Parks and Recreation as a pool manager, which was the next step after lifeguarding.

He held job for almost a year before Miami Dade College came calling to bring him in as the manager of their new Olympic-sized swimming pool. A few years as the pool manager led to a promotion as the facilities manager and finally to assistant athletic director.

The willingness to learn did not stop for Zelinski as he earned a master’s degree in administration of educational systems from Nova Southeastern University in 1976. The master’s degree gave him the opportunity to become chair of the department of health, wellness and physical education.

Zelinski spent 28 years at Miami Dade College on staff, and he met many influential people along the way. Two stick out as mentors to this day.

Zelinski would find his way to Ocala when the athletic director job at the College of Central Florida opened in 1999. A presidential change, a new direction with the athletic and physical education programs and being moved to a faculty position in the education program at Miami Dade College led to Zelinski to realize he still had a love for athletics and competition.

“The Central Florida job was intriguing, and it had a lot of challenges. Dr. Charles Dassance was the president at the time, and he told me what his vision was and how we were going to fit into the community, what he wanted from the program and what the expectations were. I just found it sounded like something I wanted to pick up as a challenge,” Zelinski said.

His run at Central Florida is unprecedented and a press release from the school shows his long list of accomplishments:

If you include his entire 51-year career in the Florida College System, Zelinski won two distinguished service awards and is in six Halls of Fame. Recently, the College of Central Florida announced it will honor him in a way that will be seen for many years: the new athletics administration building will bear his name once it is finished being built.

Shortly after his retirement announcement in March, Dr. Saul Reyes, the school’s Vice President of Student Affairs, told him that his career needed to be recognized. Dassance informed Zelinski that the swimming center on campus was going to be repurposed into the athletic administration’s new building. In a twist of irony, Zelinski helped plan the process for the new building over the final few months of his tenure before being told that it would be named after him.

It will be called the Bob Zelinski Athletics Building in recognition of the work he put into to support his student-athletes and hold a standard of excellence on and off the field.

“One day he (Dr. Reyes) just told me that he was going to go to the board of trustees and have the building named after me. I was looking at him and I said, ‘Really?’ and he invited me to the board meeting. They presented the motion to the board and the board adopted it and I was really humbled by it. I just didn’t know what to say,” he said.

He continued, “You look at those building out there and one is named after Cliff Stearns, who was a congressman that did tremendous things for the college. The art building is named after Dr. Dassance, who was the president and did tremendous things there. It’s still kind of stunning to me, I’m very humbled by it and I’m appreciative that they think that much of my career and the contributions to the college.”

Zelinski will be the first to tell you he could not have done it without the support of his wife, Donna, and two kids, Korin and Kit.

“When you’re involved in athletics, it’s very time-consuming. Serving at the state and national level all those years, plus you’re away from family at tournaments all the time. My wife was 100% involved in what I was doing, and she loved to go to games. She loved to be involved in mentoring kids and was a scorekeeper for us in basketball for a long time,” he said.

“Without that support behind you, it’s difficult,’’ he continued. “You have to all move in the same direction, and that’s just been tremendous. Same thing with my son and daughter, they were involved in athletics, and they were always thrilled with what we were doing.”

The accolades and honors have piled up for Zelinski over the years, but he always thinks back to the idea that he wanted to leave an impact on his student-athletes by always being there as a helpful leader.