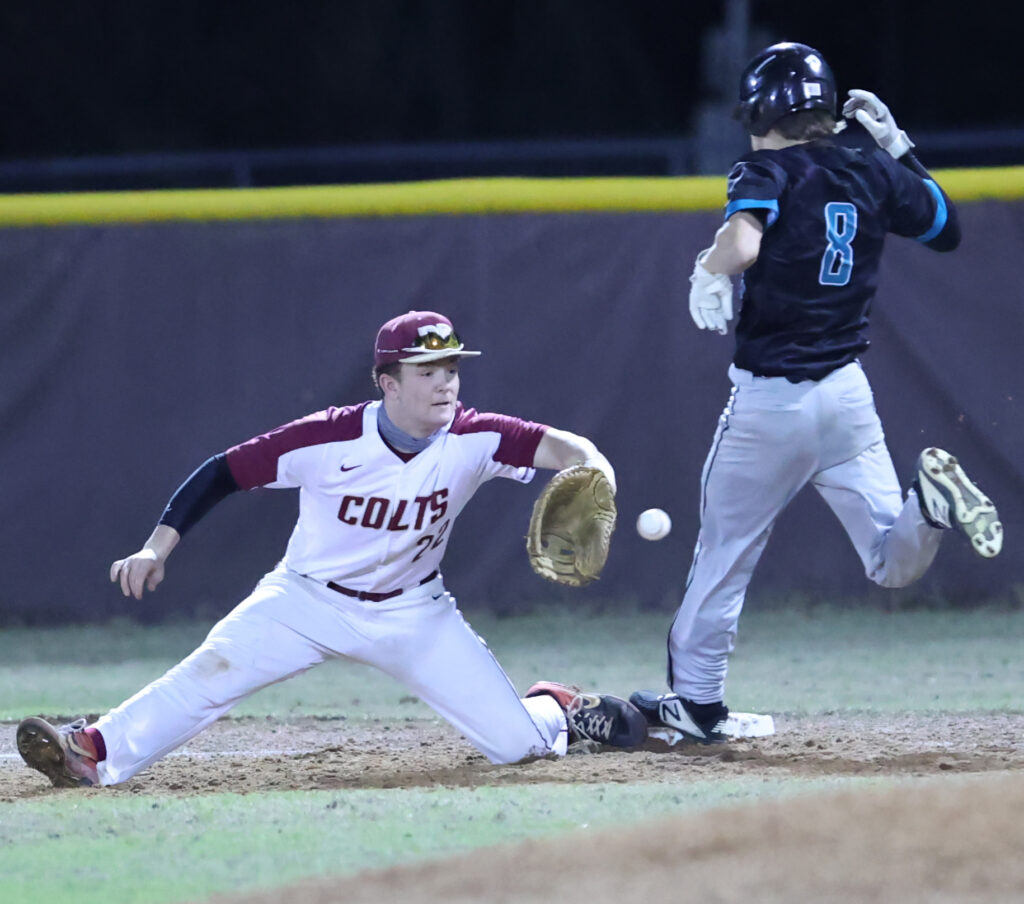 North Marion’s dugout knew it had a chance to leave the park at the crack of the bat.
With his team trailing 4-3 in the bottom of the sixth, third baseman Cooper Jones crushed a ball to center field with the bases loaded and two outs, and all West Port center fielder Jayson Yaccarino could do was watch it fly over the fence.
Amid the yells of “Let’s go!” from the Colts’ dugout, Jones’ grand slam put North Marion in the lead for the first time all night. The Colts held on for the 7-4 win in their first game of the season.
“I like the competitiveness,” North Marion coach Dale Hall said. “I think that a lot of guys could have gotten down early on themselves offensively just because we had some bat at-bats early in the game, but, you know, our hitters did a good job of knowing the situation, not (letting) the pressure get to them, get into the box, stay calm and try to find a fastball to drive.
West Port (1-2) started the night on top with a two-run first inning. With two outs in the inning, back-to-back walks and a balk set up a two-RBI double from James McEvoy to give West Port an early 3-0 lead. The Wolf Pack extended the lead to three in the top of the third after a solo home run hit by third baseman Jason Santiago.
North Marion (1-0) didn’t get on the board until the bottom of the fifth inning. The Colts had the bases loaded with two outs before shortstop Deric Fabian tied the game with a three-RBI double.
However, a chaotic sixth inning tipped the scales in favor of North Marion.
In the top of the inning, West Port had runners on second and third after a bunt moved two runners into scoring position. The Wolf Pack then took the lead back on a wild pitch.
After North Marion loaded the bases with two outs in the bottom of the inning, West Port nearly escaped the inning unscathed when senior Gavin Miller hit a grounder to first. However, first baseman Cole Renfroe bobbled the ball, giving Miller enough time to slide safely into first. Jones followed that up with his grand slam to give North Marion the lead for good.
“That’s why you run hard,” Hall said. “For him to extend the inning on that right there just shows good leadership out of him.”