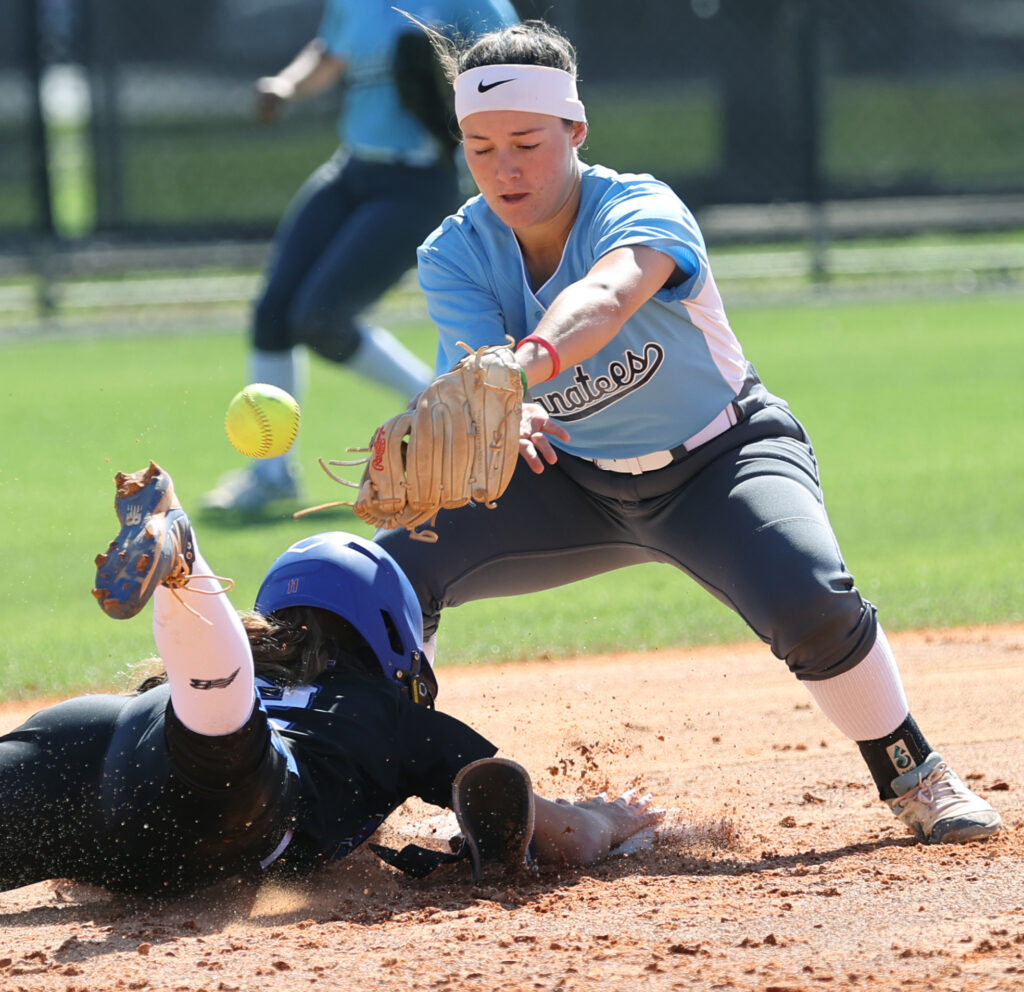 College of Central Florida sophomore centerfielder Caroline Jacquay had seen enough.
After falling behind by six runs to the State College of Florida Manatees through just one and a half innings, the Lady Patriots scratched and clawed their way back into the game behind a five-run inning in the bottom of the second inning.
But the Manatees’ offense continued to threaten the Lady Patriots.
When a pitch was cranked into orbit by an SCF batter in the top of the third inning, Jacquay was left backpedaling to the fence. But like a thief in the night, she threw her glove over the top railing of the fence and stole a home run.
Following Jacquay’s burglary, redshirt sophomore Emily Dixon lifted a two-run home run over the fence to erase the Manatees’ lead and put the Lady Patriots in control 7-6 in the bottom of the third inning.
From there, Central Florida never looked back as the Lady Patriots went on to win 14-7 and then dealt a five-inning, 12-3 run-rule victory to sweep Tuesday afternoon’s doubleheader against the State College of Florida.
“Once again our offense carries us through,” Central Florida head coach Mike Lingle said in a text. “We’ve been making some pretty good decisions at the plate while attacking with discipline. Had numerous two-out hits. Just when a team thinks they’re out of an inning, we somehow seem to extend the inning.”
Freshman Kamaya Cohen and sophomore Abbey O’Connor each notched three hits in the opening game, while freshman Gianna Guerriero and sophomores Glory Thompson and Jacquay each knocked a pair of hits in the second game.
“Gianna Guerriero has been a true triple threat for us,” Lingle said of the freshman. “Bunted for a hit, slapped a hit and then hit two home runs.”
Guerriero, Jacquay, Dixon and sophomore Odalys Cordova each sent balls beyond the fence on Tuesday, bringing the Lady Patriots’ home run total to 14 on the season.
“I feel really comfortable with one through nine in our lineup,” Lingle added.
Defensively, Central Florida was led in the circle by redshirt freshman pitcher Madison Edwards, who hurled all seven innings of the first game, giving up six hits, two home runs, and tallying six strikeouts.
In the latter game, freshman Amy Kennedy pitched four of the game’s five innings, where she gave up just three hits, two of which were sent beyond the fence, and slid three strikeouts over the dish.
“Our defense has been consistent while our pitchers will always keep us in the game,” Lingle said. “We’re playing decent ball right now, but haven’t peaked, which is a positive.”
The Lady Patriots (10-1) will return to action on Feb. 19 when they host Eastern Florida State College for another doubleheader.