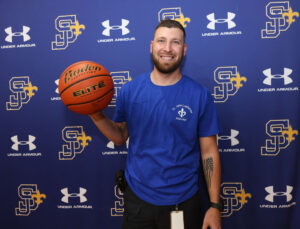 The inventor of basketball, Dr. James Naismith, developed the game while living in Massachusetts, but to many people, Indiana is considered to be the center of the sport.

It may not be all that surprising that Indiana native Derek Knox became drawn to the sport at a young age. Granted, his height may have played a role; but make no mistake, Knox has always been enamored with basketball.

Knox, 33, grew up in New Haven, Indiana with his parents and six siblings. Playing organized sports was a common occurrence in the family and the competitive nature is what kept Knox and his family members coming back for more.

“I liked the competition part of it, and I enjoyed playing on a team with close friends,” he said.

After years of playing both football and basketball, his parents pushed for him to focus on basketball due to being 6 feet, 4 inches tall by his sophomore year of high school. Knox graduated from New Haven High in 2008 and continued to live in the city until 2013 when he followed his father, Tim, to Florida.

Knox decided to pursue a career with the Florida Department of Corrections after seeing his dad serving in law enforcement throughout his life.

“Seeing my father as a cop and his gear and all that just made me want to go in the same field,’’ he said. “I wanted to join the military and I wanted to do infantry, but they told me I was too tall (6 feet, 7 inches currently),” he said.

Knox put off the idea of coaching basketball for years before a friend landed the junior varsity head coach job at West Port High School. Knox joined his friend’s staff as an assistant and after one year at West Port, his friend was offered the same job at the varsity level for St. John Lutheran. Knox served as the assistant head coach at St. John Lutheran for the past two seasons.

Knox was offered the head coaching job in May, and he accepted the offer without hesitation. The promotion has led to him taking more on his plate as he prepares for his first season as a head coach at any level.

“There is a lot more responsibilities as the head compared to the assistant coach. It has its moments bouncing back and forth between work and basketball, but I am excited to get the year started and I know the kids are very excited,” he said.

Fortunately, Knox has a solid support system behind him with his wife, Nicole, and three daughters (Kaydence, Kalista and Kira).

“They’re very supportive,’’ he said. “I get to come home and talk about how practice or games went, and they are all there to listen. They give me advice as far as how kids’ minds work these days and how I can be better at connecting with them. They are all super supportive of me.”

Fatherhood has taught Knox many lessons, but one stands out above them all.

“Have patience, not every kid develops at the same speed. You have to have patience with these kids,” he said.

Since Knox has been on the staff the past two seasons, there is plenty of familiarity with the returning players as he looks to improve the state of the program after a 3-17 record in 2021.

He continued, “I’m trying to get them to buy into the program to where we can get them to where they want to go at the next level. By getting them to buy in and believe in themselves as a person and a basketball player, so that they can achieve any goal they set in front of them.”

Knox plans on having his coaching staff focus on each player individually and work on strengths and weaknesses throughout the season in hope of having more versatile players offensively and defensively.

Being a head coach in high school sports is an opportunity for Knox to be a role model in his players’ lives well beyond their playing days.

Knox and his team open the 2022 season on Nov. 16 on the road at HEART Homeschool.