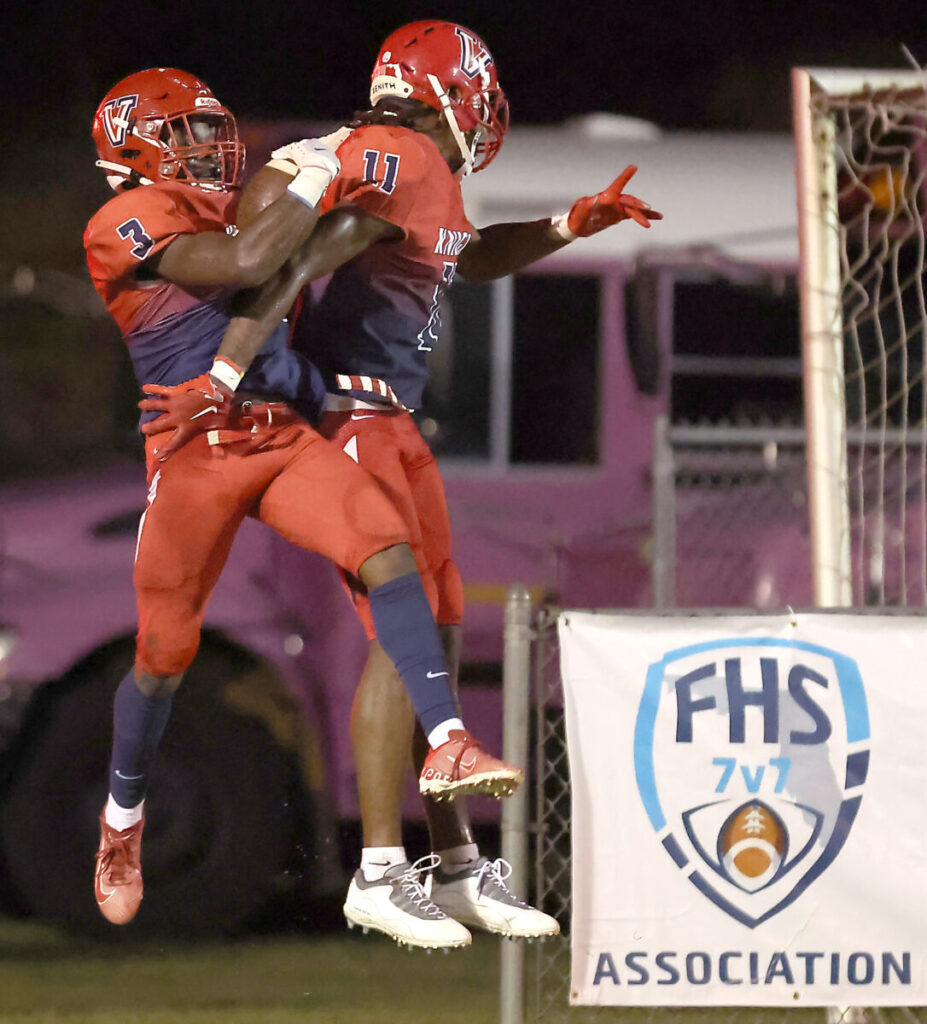 It was the opening round of the Class 3-Suburban football playoffs as the Vanguard Knights hosted the River Ridge Royal Knights at Booster Stadium on Friday night.

Both teams came into the game on winning streaks and were looking to extend their season another week with a win.

River Ridge started on offense and gained a first down on third-and-four after a six-yard run by quarterback Logan Howard.

The Vanguard defense would step up for the remainder of the drive as defensive lineman Kendarius Lee sacked Howard and defensive end Chris Allen would force a punt following a tackle-for-loss on third down.

Quarterback Fred Gaskin and the Vanguard offense went to work on their first drive as they went 60 yards on 10 plays, mostly run plays, before running back Ja’Varien Salter scored from 19 yards out. Following a pass completion to defensive end Riley Smith on the two-point conversion, Vanguard had an 8-0 lead with four minutes left in the first quarter.

Smith would pick up his first sack of the night on the ensuing drive for the River Ridge offense to force another punt but Gaskin mishandled the snap on the first play of the Vanguard drive, giving the ball back to River Ridge.

River Ridge would quickly go three-and-out and Salter would scamper for a 54-yard touchdown run on the second play of the second quarter to give Vanguard a 15-0 lead.

Friday was a big opportunity for Salter to take the spotlight with wide receiver Dallen Ponder out with an injury and fellow wide receiver Josh Rembert not feeling 100 percent.

“It was the first time I’ve had to step up and I had to step into the role to show what I can do.” Salter said.

The 54-yard touchdown run is the longest run of the junior running back’s career and he knew he was bound for the endzone after making it past the first level of the defense.

“I saw the safety with his heels back and when I cut up, I saw nothing but green grass and I knew the two safeties could not catch me.” Salter added. Unofficially, he finished the game with 10 carries, 141 rushing yards and two touchdowns.

The Vanguard defense continued to bring consistent pressure to Howard and forced another punt. Vanguard would start at the River Ridge 30-yard line and after a 12-yard run by Salter, Gaskin would link up with a wide-open Rembert for an 18-yard touchdown to extend the lead to 22-0 with just under 10 minutes before halftime.

On the following drive for the River Ridge offense, Vanguard’s defense stepped up with sacks from Leonard Hill and Jewmaris Jones to get the ball back to the offense. With a three touchdown lead midway through the second quarter, Vanguard head coach Ed Farmer brought in Jamil Watkins to play quarterback. Watkins had a nice 10-yard run for a first down and the offense drove deep into River Ridge territory before Salter lost a fumble into the endzone.

The River Ridge offense could not take advantage and had to punt. Fortunately, Vanguard gave away another fumble as Hill lost the ball at the end of a 25-yard run into the redzone. On the following play, Howard hit running back DeAnthony Patterson in stride for a 53-yard completion.

The big play to Patterson would be the longest play of the night for River Ridge and the only time they got within the Vanguard 30-yard line for the entire game. On the final play of the first half, Howard lofted a pass up for the endzone but Gaskin came down with the interception.

Vanguard’s offense came out firing to start the third quarter as Watkins had a 30-yard run and wide receiver Tay Leslie had a 10-yard run to put the Vanguard offense into River Ridge territory. The drive stalled and Vanguard had to punt for the first time but River Ridge could not get anything going on offense despite a 15-yard run by Howard.

Following a turnover on downs from River Ridge, Vanguard methodically drove down the field using the legs of Salter as he gained 21 yards on three carries before Watkins connected with a wide-open Cam’Ron King for a 36-yard touchdown pass to give Vanguard a 29-0 lead with three minutes left in the third quarter.

Seeing younger players such as King and Watkins have success in a playoff game gives Farmer confidence about his depth moving forward as each matchup gets tougher.

“We got guys who are going to step up and make plays. We got two or three other guys that can come into play when someone is hurt.” Farmer said.

The blowout was on when Gaskin got his second interception of the night and returned it 65 yards for a touchdown with 10 minutes left in the game. The quarterback/defensive back was quiet on offense after his touchdown pass but his made presence known on defense, playing both ways and performing at a high level is something that Gaskin takes pride in doing.

“I have to be an impact player at all times, I have to make plays and make myself known.” Gaskin said. On the interception returned for a touchdown, Gaskin made the read early and had his sights set on the endzone as soon as he caught the ball.

“I was playing high-low, so either I had the out route, or the top route and I saw him break on the shorter route and he just threw it right to me, so I took it back to the house.” Gaskin said.

The last nine minutes and change of the game was on a running clock and both offenses had a drive stall and would punt to finish off Vanguard’s win by a final score of 35-0.

Coach Farmer was happy with the win but wants the team to clean up the mistakes as they will face an undefeated Lake Wales team next week. Three lost fumbles and multiple penalties that negated touchdowns on offense kept them from scoring 50-plus points.

“We got to make sure to clean up our mistakes, we can’t go into big playoff games and makes mistakes. We got to eliminate those mistakes, that has to happen, and I thought we did better as the night went on but there is still room for improvement.” Farmer said.

Gaskin echoed his coaches sentiment and thought the team handled the mistakes with maturity and did not let it snowball into more mistakes.

“Nobody got discouraged, everybody stayed on task. We weren’t fazed by it and I was happy about that because everybody stayed focused so that we could go back out and keep doing what we were doing.” Gaskin said.

The story of the game was the Vanguard defense as they racked up five sacks and a bucketful of tackles for loss.

“We played defensive assignment football, I thought they came up with a great game plan. Our plan tonight was to keep them off the scoreboard and they did it. Everybody played together and the coaches did a good job pushing them up and getting them ready.” Farmer said.

The playoffs only get tougher from here as Vanguard faces a Lake Wales defense that has given up a total of 51 points over 11 games.

Even with a two-hour road trip ahead, Farmer is confident his team will be ready for battle.

“Definitely going to be a good football game. I’m sure they’re hungry for us because we came out on top last time we played. We are used to going on the road and traveling does not bother us.” he said.