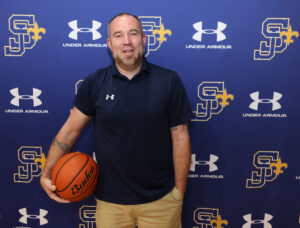 Adam Boomhower’s earliest memories involve being outside and active while playing any sport he could learn alongside his younger brother, Kevin.

“I grew up in a small, country town. So, you were either farming or doing some sort of activity and I just love being active. I love moving around and always being on the go,” he said.

The new head coach of St. John Lutheran girls’ varsity basketball grew up in Ravena, New York, a town with a population of just over 3,000. Boomhower was a multi-sport athlete in his youth and high school days.

He played Pop Warner football and AAU basketball before going on to be a part of the varsity football, basketball, bowling and track teams at Ravena-Coeymans-Selkirk High School, he graduated in 2004.

A job opportunity in Florida led his parents, Mike and Kathleen, to the Sunshine state in 2003. Boomhower would stay in New York to finish his senior year of high school and following his high school graduation, he would attend Hudson Valley Community College for a year before moving down to Florida in 2005.

Boomhower, 37, would earn his associate degree in business administration from the College of Central Florida in 2006.

Coaching became an opportunity at a young age for the New York native as he was a youth bowling coach during his last two years of high school. Once his daughter, Sadie, started playing sports, Boomhower found himself coaching from the stands.

“My daughter was going to Blessed Trinity and it made sense for me to make the jump,” he said. She is currently attending Trinity Catholic and will be playing for either the junior varsity or varsity girls’ basketball team.

Success would come in waves at Blessed Trinity for Boomhower as his junior varsity team won two conference titles and his varsity team won three conference championships during his five-year tenure. During that period, Boomhower started an AAU team (Central Florida United Hoops) that has been in existence for six years.

All the success at Blessed Trinity Catholic caught the attention of St. John Lutheran athletic director Daniel McLeod and Boomhower took over the entire girls’ basketball program (middle and high school level) in September of this year.

With a short amount of time to get ramped up at St. John Lutheran, Boomhower has gone into high speed to get acclimated to the players and people around the program by attending volleyball and football games to get to know current players and possible future players.

Boomhower said the goals for this year are to build a complete program from middle school to varsity with the plan of having a junior varsity and varsity team for the middle and high schools at St. John Lutheran.

It will be a work in progress for his varsity team as they try to rebound from a winless 2021 season, Boomhower wants expectations to be clear from day one and to have communication be a strength.

“Having an open line of communication, we have to be straightforward. We have to get right to the point and be able to communicate my expectations, my staff’s expectations and what they are for the season,” he said.

Patience will be needed and Boomhower said he has learned the attribute through fatherhood and being his daughter’s coach at the same time.

“Patience is a big thing because I’m trying to get my points across and get them to understand what I’m saying. Some of them don’t catch on right away, so it’s about patience and that is key with all kids,” he said.

Boomhower credits his wife of 16 years, Savannah, to having a major impact and supporter to his career, along with their daughter.

Coaching at the high school level allows for leaders to make a lasting impression on their players and be someone to lean on beyond high school. For Boomhower, that sentiment rings true in his mind as he strives to be a mentor in life.

“I want to be someone they can reach out to and talk to. Not necessarily about basketball but life in general. I want them to be able to say Coach Adam was a big part of their life and he helped me get to where I am now.”

He added: “You want to build them up beyond the court to be a strong, young lady.”

Boomhower and his squad star their regular season on Nov. 8 at Winter Haven Christian.

“I’m looking forward to the season and I can’t wait to get into the gym to get started.”