Gallery: Vanguard rides dominant second half to win over Forest in season finale 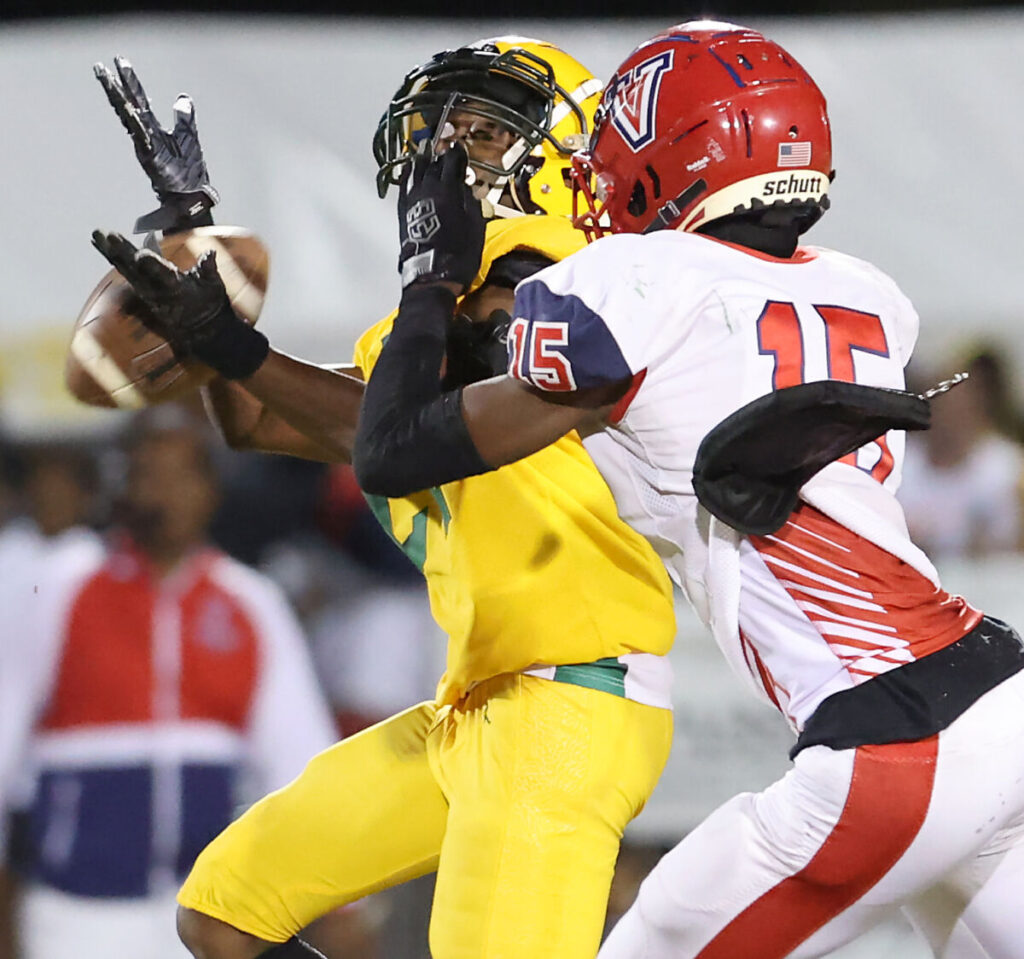 It was the battle of Marion County’s oldest rivalry as the Forest Wildcats hosted the Vanguard Knights on Friday night at Mikey Kelly Stadium.

The stakes were high as Forest came into the game needing a win to improve their chances of landing an at-large bid for the playoffs. Forest came out with the energy and passion of a team fighting for its season as they would recover an onside kick on the opening kickoff of the game.

Starting at the Vanguard 40-yard line gave the Forest offense superb field position and would take advantage as Amadrick Hope scored from six yards out on the fifth play of the drive to give Forest an early 7-0 lead.

Vanguard struggled on offense in the opening quarter before senior quarterback Fred Gaskin would find wide receiver Dallen Ponder for a 10-yard touchdown on the second play of the second quarter. A missed extra point kept the score in favor of Forest at 7-6 until Matt Gomez kicked a 16-yard field goal with just over three minutes before halftime.

Both offenses were forced to punt in their final drives before halftime as Vanguard carried a 9-7 lead into the break. Vanguard had an opportunity to extend their lead midway through the third quarter but a 30-yard field attempt was wide left and kept the score at 9-7.

The Forest offense would break through on the following drive as Matt Hart took a short pass 62 yards to the Vanguard 3-yard line. Three plays later, on fourth-and-goal, quarterback Vimel Poole called his own number on a one-yard touchdown run that looked like a rugby tussle between the offensive and defensive lines.

Forest now had a 14-9 lead and all the momentum after their defense forced Vanguard to punt following Poole’s touchdown. On the first play of the drive, Vanguard defensive back Zamaryon McCray-Farmer came up with a huge interception that changed the complexion of the game.

“I saw it coming and he rolled out. I had to come in and make a big play and that’s what I did.” McCray-Farmer said.

Gaskin connected with an open Ponder in the middle and he would take it 24 yards for a touchdown just two plays after the interception to give Vanguard a 15-14 lead late in the third quarter. Ponder finished with two receptions, 24 yards and two touchdowns.

“Just had to be patient, trust the play calling and execute.” Gaskin said.

With momentum on their side, the Vanguard defense forced a punt on the ensuing drive. A short punt from Forest set up the Vanguard offense at the Forest 35-yard line and four plays later, Gaskin would walk in for a 5-yard touchdown run to give his team a 22-14 lead with nine minutes left in the game.

Forest started out the following drive with a 13-yard run from Hope but Poole would be intercepted on the next play by linebacker Tre Stokes. The interception and a 25-yard run by Gaskin had Vanguard in the red zone with a chance to put the game away.

Gaskin and running back Tay Leslie did not have a clean transfer on a handoff and Forest came up with a fumble recovery at their own 20-yard line. Vanguard’s defense would hold and force a punt from the Forest offense with four minutes left to go.

On the fourth play of the following drive, wide receiver/defensive back Jamil Watkins had the play of the night as he took a pass out wide to the left sideline and proceeded to go back across the field and break two tackles along the right sideline before scoring a 34-yard touchdown. In total, Watkins ran about 70 yards on the play as he showed impressive stamina and elusiveness on the way to the end zone.

Watkin’s touchdown came with just over three minutes left to give Vanguard a 29-14 lead and seal the win as the defense would force a turnover on downs to end the game.

Vanguard head coach Ed Farmer was pleased with the victory and the second half performance but said he wants to see his team pick things up earlier than the third quarter if they want to win a state championship.

“I told the kids we got to put it all together because in these situations, the team that makes the least mistakes wins. Got to stay focused because right now is the time you have to win.” he said.

Gaskin, who also plays safety, said the message at halftime was short and to the point.

“Come out with a little fire, play intense and don’t let anything slide.” he said.

As for Forest, it was an up and down season that ends with a 5-5 record. First-year head Eoghan Cullen was disappointed about the final result but is excited for the future.

“Proud of the kids, we led during the game twice and we went four quarters with Vanguard, that’s a huge step for this program. It’s only our first year, we will lose some kids but we have a lot of underclassmen coming back.”

He added: “I believe we can win here, I believe our community believes we can win here. As the kids learned this year, there is no shortcuts and winning is hard. It takes a lot of hard work and commitment to beat teams like Vanguard. That’s where our focus will be this off-season.”

Senior defensive end/outside linebacker Tae Floyd is a leader on the Forest defense and leaned on a saying from the coaching staff to keep the defense energy level up as the offense struggled for most of the night.

“It’s a brotherhood, we all try to be on one accord. The saying is ‘one boat, one mind’ and we just did our best to keep us in the game.” Floyd said.

Floyd set the school’s single-season sack record a couple weeks ago and was thankful for the impact Cullen and his staff had on him.

“They changed my work ethic as a player. They made me realize what I can accomplish when I work hard.” he said.

Seniors such as Floyd are so important in helping a new coach, such as Cullen, get buy-in from players and Cullen was adamant that coaching goes beyond the football field.

“I told them that I’m always here for them, if they ever need anything at all. Coaching and being there for them doesn’t stop, we’re always there for each other.” he said.

Vanguard’s 2022 season doesn’t stop either as they await their playoff opponent, matchups will be announced on Sunday at 11 a.m. Gaskin is optimistic that the four-game winning streak to finish the regular season is the start of a memorable run.

“We’re coming on strong and we are on a little streak. I feel good about the playoffs, and we can make a run.” he said.

Farmer said the team and staff have one goal in mind: a state championship.

“The thing is we can’t just get past the first round or second round, it’s a round at a time but we got to get to a state championship.” he said.