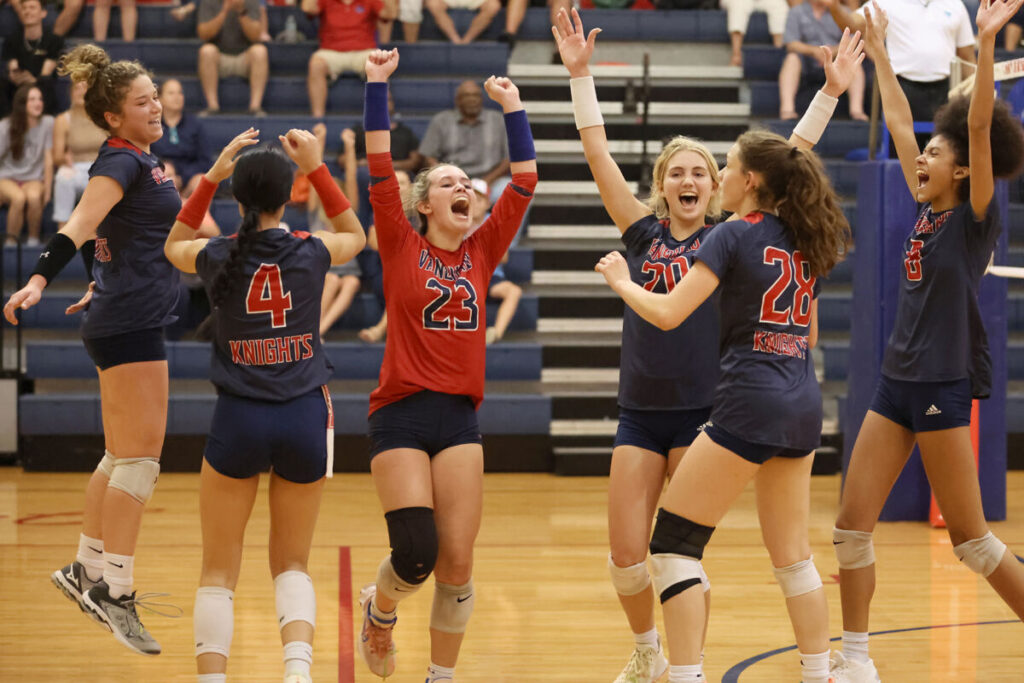 After missing most of the volleyball season because of two stress fractures in her back, Vanguard senior standout Emma Ehmann was motivated to return to help the Knights make a run in the state playoffs.

A healthy Ehmann has returned with a vengeance and paced a potent Vanguard offense with a match-high 24 kills, while Ruby Owen and Lillian Hart added six kills apiece, and senior setter Sophie Reed had a match-high 34 assists to help the Knights beat Ridgeview by scores of 25-14, 25-18 and 25-19 in Wednesday night’s Class 5A-Region 1 finals.

Ridgeview (Orange Park), the number six seed, finished the season with a record of 18-12, while Vanguard, the number five seed, improved to 16-11 overall. The Knights will play in the FHSAA Class 5A state semifinals on Saturday.

“It means a lot to win the regional finals,” said Ehmann, who is committed to play volleyball at Nova Southeastern University. “I was really sad I had to miss the beginning of the season, but I made it my goal to come back and play the best I ever have and help us win a state championship. I’ve been playing with Sophie for years, we’re basically mentally connected and without her I wouldn’t have gotten this far.”

Vanguard, which overcame a slew of injuries and adversity during the season, has gotten healthy and the Knights, who won their sixth consecutive match in dispatching the Panthers, are playing their best volleyball of the season at the best possible time.

“It feels good,” said Vanguard coach Luis Perez of the regional championship. “We had our ups and downs during the season, but we worked really hard and it’s not how you start but how you finish that matters. We played well, I’m very proud of the girls and we’re two matches away from a state title.”

Vanguard came out firing on all cylinders in the opening set as Ehmann drilled 11 winners and Hart added a pair of kills as the Knights took a commanding 20-10 lead over Ridgeview.

Owen and Ehmann took turns drilling spikes past the Panther defenders to take the first set 25-14.

The second set was similar as Vanguard jumped out to a 20-13 lead as senior libero Adyla Kerley had a pair of service aces, Reed, who will play volleyball at Amherst College, had a kill and a pair of blocks and Ehmann continued to find holes in the Ridgeview defense with well-placed shots.

The Panthers, fueled by a pair of spikes by junior middle hitter Haley Robinson, tried to rally, but Vanguard closed out the set on a wicked cross-court spike by Ehmann and a service ace by freshman Kaylee Ramirez to go up 2-0.

Ridgeview, deflated by the hole it was in, fell behind in the final set as Reed, who was honored before the match for reaching the 2,000 career assist mark, had a kill and a block and Hart added a pair of kills and teamed with Ehmann for a block to put the Knights on top by a score of 20-14.

The Panthers refused to fold and made one last run as Brianna Adams scored with a pair of kill shots and Katie Cole had a block and a spike to pull Ridgeview within 24-19.

But appropriately enough, it was Ehmann who ended the set and the match with a vicious kill shot to earn the Knights a spot in the state Final Four.

Ehmann was a freshman on the 2019 Vanguard squad that lost in the state championship game.

“I’m feeling really good now and this was my inspiration when I was injured and going through rehab,” Ehmann said. “It would mean the world if we could win the state championship. It would make all the work over the last four years worth it. I got a little taste of state my freshman year, now I’m ready for the whole thing.”

Vanguard will play in a Class 5A state semifinal on Saturday.

“We are regional champions and we’re going to enjoy this win tonight and then see who we’re going to play next,” coach Perez said. “We’ll look at some video of who we face and get ready to play on Saturday.”