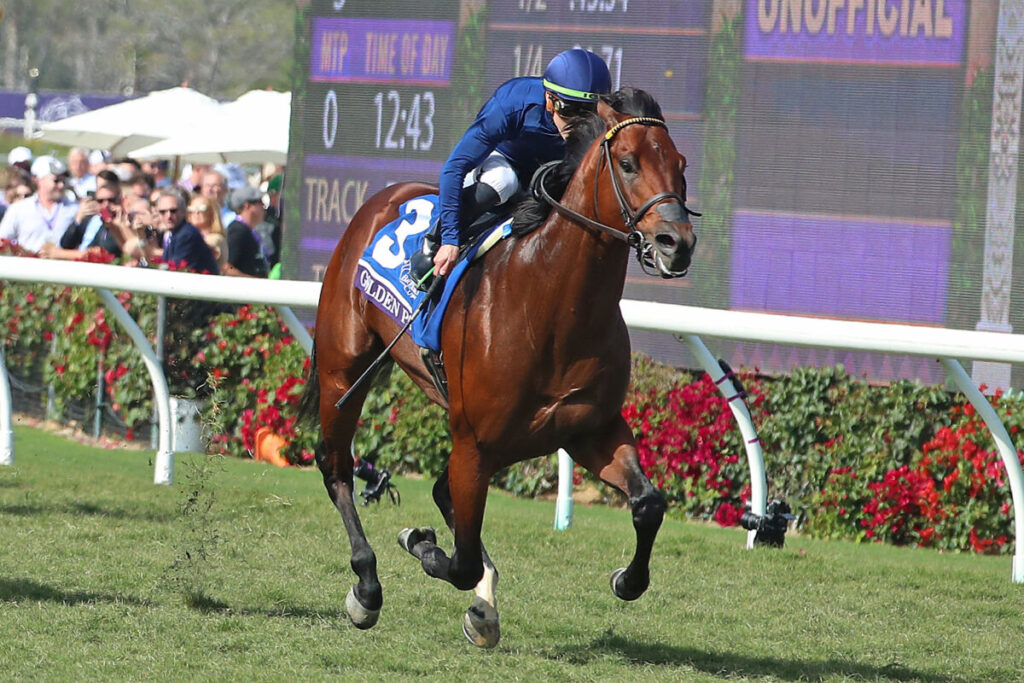 Florida-breds are poised to add to their 30 total wins at the Breeders’ Cup World Championships as racing’s marquee event is held for the 39th time on Nov. 4-5 at Keeneland in Lexington, Kentucky.

Golden Pal has been a picture of consistency for owners Susan Magnier, (wife of John Magnier), Michael Tabor, Derrick Smith, et al. and trainer Wesley Ward. Bred in Florida by Randall Lowe, Golden Pal is a winner in eight of 12 lifetime starts and has placed in two others en route to career earnings of more than $1.8 million. The 4-year-old son of Uncle Mo is coming off a facile score in the Woodford Stakes (G2) at Keeneland, and he will be ridden by his regular jockey Irad Ortiz Jr.

“I was very happy with his post,” Ward said. “Post eight, we’re out there a ways to where he can break and this way Irad will get a sense of what he wants to do. If he breaks as sharp as he usually does, he can kind of ease over to the rail. Or, if somebody catches a flyer and breaks like him, Irad will be able to ride his race from there.”

Golden Pal has raced at six tracks during his stellar career, and he is unbeaten in four starts at Keeneland, where his trainer is based.

“We’re ready to roll,” Ward said. “He’s been pointing for this since last year’s race. This is a race that I asked Michael Tabor about right after the horse crossed the finish line (last year), as we’re heading to the winner’s circle, if we could get one more year. Before we got on camera, I kind of wanted to pin him down a little bit. He didn’t see why not, so here we are today.”

A two-time stakes winner in 2022, Hot Peppers captured the Jersey Girl Stakes and the Victory Ride Stakes at Belmont Park and finished second in the prestigious Test Stakes (G1) at Saratoga in August. Hot Peppers was a two-time OBS graduate, originally selling at the 2020 October Yearling Sale and then was purchased for $16,000 at the 2021 June Sale out of the de Meric Sales consignment. Listed at odds of 30-1 on the morning line, Hot Peppers is trained by Rudy Rodriguez and will be ridden by Junior Alvarado.

Simplification, a Florida-bred colt by leading Kentucky stallion Not This Time, drew post position No. 2 in the $1 million Breeders’ Cup Dirt Mile (G1).

Owned by Tami Bobo and Tristan de Meric and bred by France and Irwin Weiner, Simplification was on the Kentucky Derby trail earlier this season following a win in the Fountain of Youth Stakes (G2) at Gulfstream Park. The 3-year-old finished third in the Florida Derby (G1) and was a determined fourth in the Kentucky Derby (G1) on the First Saturday in May for trainer Antonio Sano. All told, Simplification has won three of 11 starts and has earned $769,950. He will be ridden by jockey Luis Saez and his morning line odds have been set at 15-1.

A pair of Florida-breds will contest the $2 million Breeders’ Cup Sprint (G1) at six furlongs with C Z Rocket and Willy Boi carrying the state’s banner.

An $800,000 purchase from the 2016 OBS June Sale, C Z Rocket is 20-1 on the morning line for trainer Peter Miller and jockey Flavien Prat will be aboard him for the first time on Saturday.

Willy Boi, bred by Ocala Stud and William Terrell and campaigned by Lea Farms, will begin from post position No. 10 in the Sprint and will be ridden by Chantal Sutherland. The Jorge Delgado trainee won the Big Drama Stakes and the Smile Sprint Stakes (G3) at Gulfstream Park over the summer and most recently finished third in the A.G. Vanderbilt Handicap (G1) at Saratoga. The 4-year-old son of Uncaptured sold for $40,000 at the 2020 OBS October Sale, and he has won six of 13 lifetime starts and banked $350,485.

Sunshine State products kick off Breeders’ Cup weekend on Future Stars Friday with undefeated Speed Boat Beach in the $1 million Breeders’ Cup Juvenile Turf Sprint (G1). A winner of his first two career starts—a maiden special weight on the dirt at Del Mar and then the Speakeasy Stakes on the turf at Santa Anita—Speed Boat Beach is trained by Bob Baffert and will be ridden by Prat for owners Michael Pegram, Karl Watson, and Paul Weitman. Bred in Florida by Caperlane Farm, Speed Boat Beach was a $200,000 acquisition at this year’s OBS March Sale. He drew post No. 11 and is 6-1 on the morning line.

“Hopefully, it doesn’t rain and it’s not soft,” Baffert said. “He’s a fast horse. He’s a really fast horse. Is turf his game? I don’t know. I think he is better on dirt, but I wasn’t going to run him going a mile and a sixteenth (in the Juvenile). Maybe down the road, but he’s not ready for it now.

“I saw him at the sale. He worked fast,” Baffert added. “He’s just a beautifully built horse. He looks like Bayern (his sire) and is fast. Bayern couldn’t stretch out until later as a 3 year old. I tried stretching him and he just wasn’t ready for it. With some horses you’ve just got to wait, and it will come eventually. I think Speed Boat Beach was named right. He has a lot of speed.”

Atomically, winner of the FTBOA Florida Sire My Dear Girl Stakes at Gulfstream Park Oct. 1, will break from post position No. 8 in the $2 million Breeders’ Cup Juvenile Fillies (G1) on Friday. Owned by Eclipse Thoroughbred Partners, Michael Bernard and Harry Colburn and trained by Todd Pletcher, Atomically is a winner in two of three starts and has earned $268,000.

Bred by Tracy Pinchin and Michael Bernard, the bay filly is a first-crop daughter of former Ocala Stud stallion Girvin, and she is listed at odds of 12-1 on the morning line.

Rounding out Florida’s contingent on Friday is Delight, a 2-year-old filly by Mendelssohn, who will start in the Breeders’ Cup Juvenile Fillies Turf (G1). Bred in the Sunshine State by Hickstead Farm and owned by Augustin Stable, Delight is trained by Jonathan Thomas.

A dominating five-length winner of Keeneland’s Jessamine Stakes (G2) in her most recent start, Delight is 6-1 on the morning line. The chestnut filly is a winner in half of her four starts, and she has earned $211,905. Delight is a two-time OBS graduate. She was sold by agent Stuart Morris at the 2021 October Yearling Sale and then was purchased for $400,000 out of the Paul Sharp consignment at this year’s March Sale.

As for the marquee race of the weekend, the $6 million Breeders’ Cup Classic (G1), undefeated Flightline puts his lofty reputation and spotless record on the line against a contentious field that includes Rich Strike, this year’s Kentucky Derby (G1) winner, and the impressive Grade 1 winners Life Is Good, Taiba, Epicenter, and Olympiad.

“It was a great thrill Saturday when he had his last workout and you saw two or three thousand people out there in the dark to watch his last work,” said trainer John Sadler. “It’s been a great reception so far and we’re looking forward to Saturday. Good draw. We would have been happy with any draw. We think at a mile and quarter you have a good run into the turn to get your position, so for him, it’s just fine.”

Flightline, who figures to be the shortest-priced favorite over the two days of racing, is perfect in five career starts. He was a geared down 19 ¼-length winner of the Pacific Classic (G1) at Del Mar in September and he won the Metropolitan Mile Handicap (G1) in June at Belmont Park by six lengths. Last year at 3, he won the Malibu Stakes (G1) in his stakes debut, and he has earned more than $1.3 million in his spectacular career. Approximate post time for the Breeders’ Cup Classic is 5:40 p.m. on Saturday.