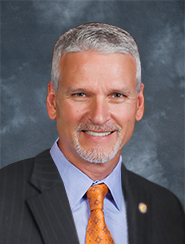 As Chair of the Florida Senate Appropriations Subcommittee on Civil and Criminal Justice, it is my job to ensure Florida’s neighborhoods remain safe and every dollar we spend on our criminal justice system is used effectively.

As a small business owner, I’ve learned two important lessons. The first is if you want something, you have to earn it. The second is the best way to get people to succeed is to give them an incentive to do it.

This year, I filed Senate Bill 1032, addressing the need for prison time to be used for rehabilitation. Currently, prisoners can be released early for staying out of trouble, but without doing anything to better themselves while incarcerated. Instead, this bill allows prisoners to earn time to be released early when they participate in education programs such as vocational programs, GED programs, and occupational certifications.

Nearly nine out of ten people who enter the Florida Department of Corrections will eventually reenter society. From 2018 to 2020, 30,030 prisoners were released, that number has been pretty stable over time. Based on that data and the current prison population, we can estimate about 130,000 prisoners will be released over the next five years.

The number of prisoners released in 2016 who returned to prison within three years was 25.4%. At that rate, an estimated 33,020 individuals will reenter the prison system over the next five years. That number is too high, and I know we can do better.

The question is if we create an environment where prisoners take charge of their rehabilitation and if we offer incentives to prepare them to reenter society, would they be better off when they leave prison than when they entered?

We know that finding a job is the best way to keep a person from reoffending. And we know that education – a high school equivalency degree, college classes, or vocational certificates –help formerly incarcerated people find and keep a job.

By tapping into the power of incentives, we can encourage incarcerated people to assume responsibility for their rehabilitation and their time inside prison to build character, learn the values and skills necessary for success, and earn – not be given – a second chance.

Some people say the only way to keep crime down is by locking people up and throwing away the key. It is true that incapacitating offenders who pose the greatest threat to public safety is necessary and important. To protect the public, violent and habitual offenders are not eligible for these programs.

Studies in recent years have confirmed that incentivized rehabilitation improves public safety outcomes and results in big budget savings. A study created by Senate Bill 642 (2019) found our state would save more than $860 million by adopting rehabilitation credits for even a fraction of state prisoners.

A study by the Crime and Justice Institute found that reinvesting those savings into rehabilitative programming would reduce previously incarcerated people from reentering the prison system, yielding even more in savings over the long-term. Some states, including Georgia, Alabama, Mississippi, Louisiana, and Texas have already used some form of incentivized “rehabilitation credits” to reduce crime.

By releasing prisoners back into society with the tools they need to succeed, we create a culture for less crime, fewer victims, and a more productive society. Incentivized and earned rehabilitation credits will reduce re-offense rates, lower the number of victims of property and violent crime, and break the cycle of crime and incarceration that disproportionately affects low-income and minority citizens.

Our options are simple. We can continue to warehouse prisoners, do next to nothing to rehabilitate them, and then release them, keeping our fingers crossed that they won’t return. Or we can recognize that incentives work and give prisoners an opportunity to earn a second chance at the American Dream, benefiting all Floridians.

Warren ‘Keith’ Perry is a Republican member of the Florida Senate, representing the 8th district, encompassing Alachua, Putnam, and part of Marion County in North Central Florida, since 2016.

TALLAHASSEE – The Florida Chamber of Commerce and a major...

Playtime with a purpose

The City of Ocala Recreation and Parks Department announced that...

LPGA Drive On Championship presented by Volvik at

With the win over Lincoln High School last week, T

Heritage Skills Day is coming to the Fort King Nat

The Forest Wildcats leave to play in the Final Fou

Retro Sounds, a music and art event, will be comin