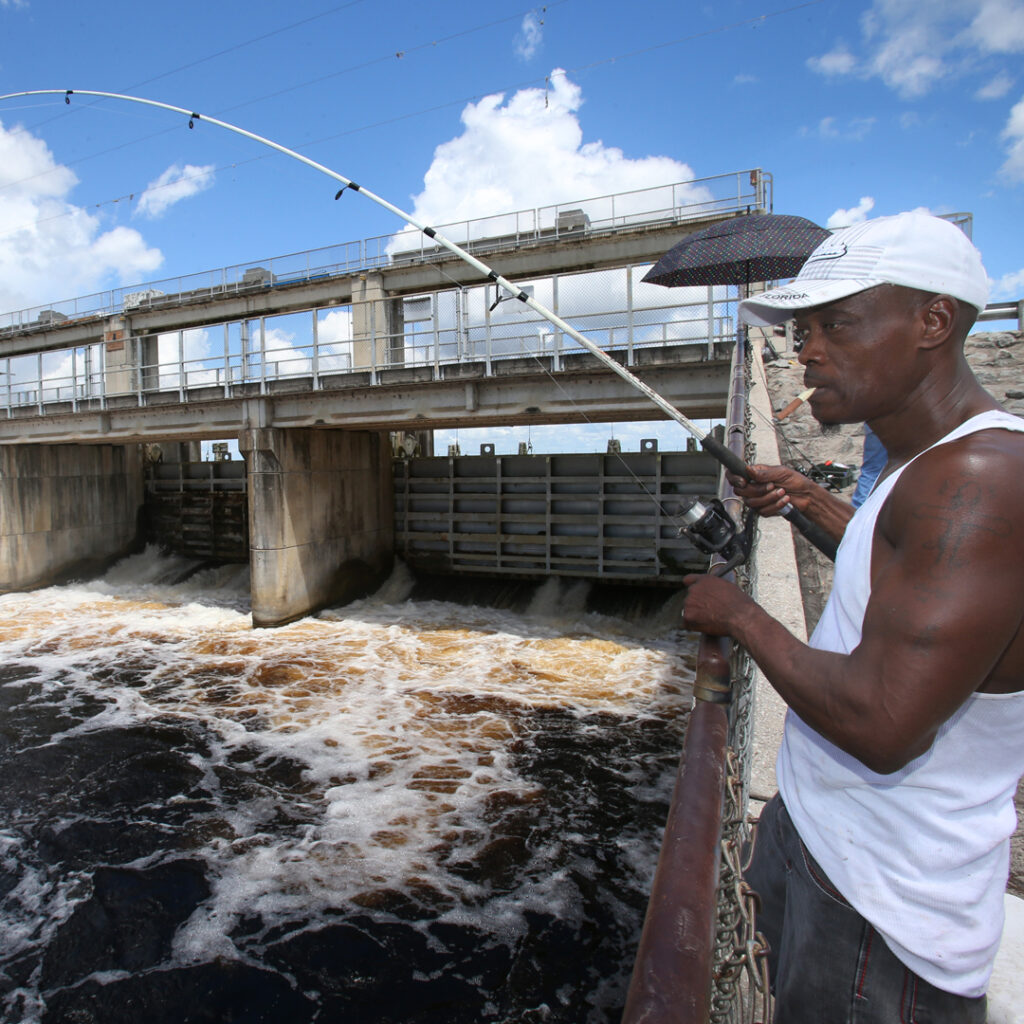 Rickie West of Gainesville pulls in a red brim as he fishes in the spillway of Rodman Reservoir on top of the Rodman Dam near Palatka, Fla. on Monday, July 20, 2020. The dam was built as part of the aborted Cross-Florida Barge Canal system in 1968 and created the 9,000-acre Rodman Reservoir. Over the years, numerous environmentalists, including Marjorie Harris Carr, have said that the construction of the dam has completely closed off the flow of the Ocklawaha River. [Bruce Ackerman/Ocala Gazette] 2020. 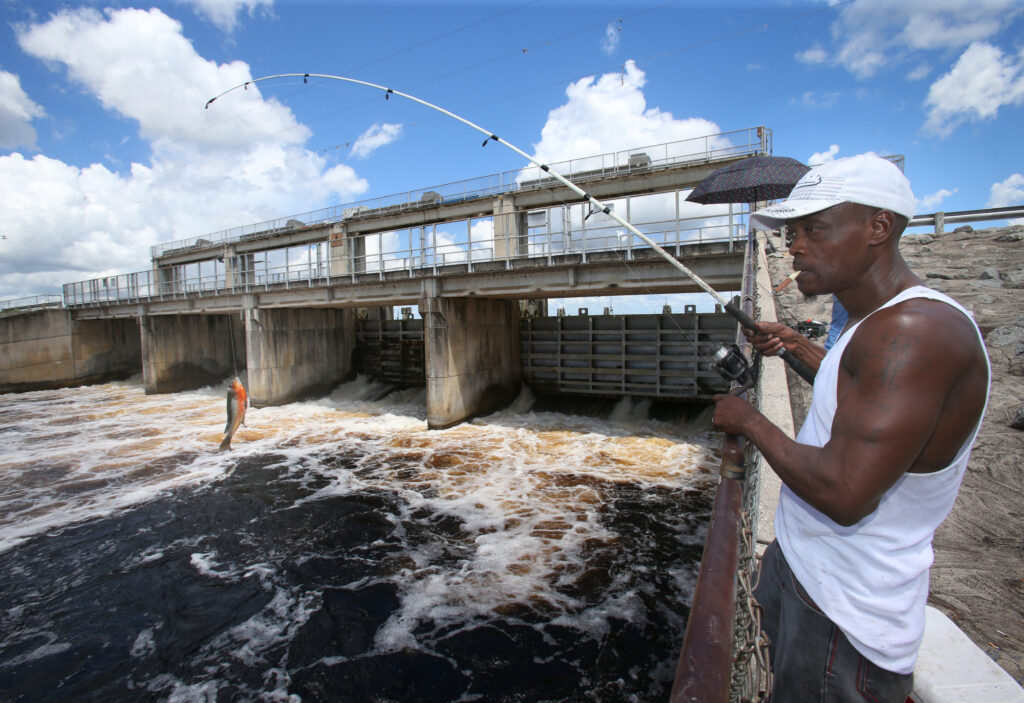 Rickie West of Gainesville pulls in a red brim as he fishes in the spillway of Rodman Reservoir on top of the Rodman Dam. [Bruce Ackerman/Ocala Gazette]

The Florida Defenders of the Environment (FDE) is arguing that, based on newly released dam inspections from 2017 and 2019, the Rodman Dam is a bigger hazard than previously thought.

The 7,200-foot-long earthen dam is currently categorized as a “low hazard” structure by the Florida Department of Environmental Protection, which operates the dam. But the FDE argues the state has ignored issues with the dam’s structural integrity and should be labeled a “high-hazard structure.”

Bruce Kaster, an attorney for FDE, said that a 2015 inspection showed issues with the dam’s structure that had to be fixed. But according to 2017 and 2019 reports, which were not released until the group asked for them through a Freedom of Information Act request, the problems were never fixed, he said.

When reached on Wednesday, the state DEP stated it was working on a response to the charges. That response was not available at press time.

“The state has withheld findings of its own inspections and neglected routine maintenance to the point that Rodman Dam is now a ticking time bomb for downstream communities,” Kaster said. “This dam that has never served a purpose in its 54-year life has now become a very serious safety liability for the state.”

The latest charge is part of a decades-long fight by the FDE to have the dam removed so the Ocklawaha River can return to its natural flow. The safety issue comes more than a year after a U.S. District court judge dismissed a lawsuit by the FDE claiming the state was operating the dam without a required permit.

The dam is located near the Marion County border in Putnam County. A 10,000-acre reservoir formed by the dam lies in Marion and Putman and is an angler’s paradise. The dam went online in 1968 and was part of the never-completed Florida Barge Canal project. That project would have built a canal from Jacksonville, on the east coast, to Yankeetown, on the west, for shipping traffic. The FDE formed in 1969 with the goal of rolling back the vestiges of the canal project.

The Florida Defenders of the Environment hired Givler Engineering Inc. (GEI) to evaluate the dam based on the reports. They concluded that there is enough information that shows the dam is a high hazard structure, based on the company’s review of the reports.

GEI has offices in Texas and Pennsylvania and specializes in dams.

Its findings state that the dam’s need for maintenance and repair have been understated and not enough is being spent on necessary work dating back to 2015.

“One of the things we learned from our Freedom of Information request was that no repairs were ever made. No money was ever spent,” Kaster said. “So, all the deficiencies that were identified in 2015, 2017, 2019 and summarize it 2021 are still there. What happens when hurricane season comes? Well, that’s something I wouldn’t want to face if I live downstream, and I don’t think Putnam County wants to face it.”

Kaster said on Wednesday that a “catastrophic failure” of the dam could cause death for those living near it as well as $57 million in property damage. The GEI report concluded that the dam should either be repaired or removed.

“Based on the information available to date, it appears that the Kirkpatrick Dam is suffering from neglect,” the report said. “A lack of maintenance and repair increases risk for those downstream of the structure. It is the duty of the engineers to make realistic assessments and constructive recommendations to preserve the health, safety, and property of those downstream. It is the duty of state and federal agencies to critically review the engineers’ work and to respond to recommendations, especially as they pertain to the safety of the citizens that they work for.”

Defenders of the dam argue that in addition to the fishing paradise it created, the dam is an important tool for flood control and maintaining water quality in the St. Johns River. The Ocklawaha feeds into the St. Johns.