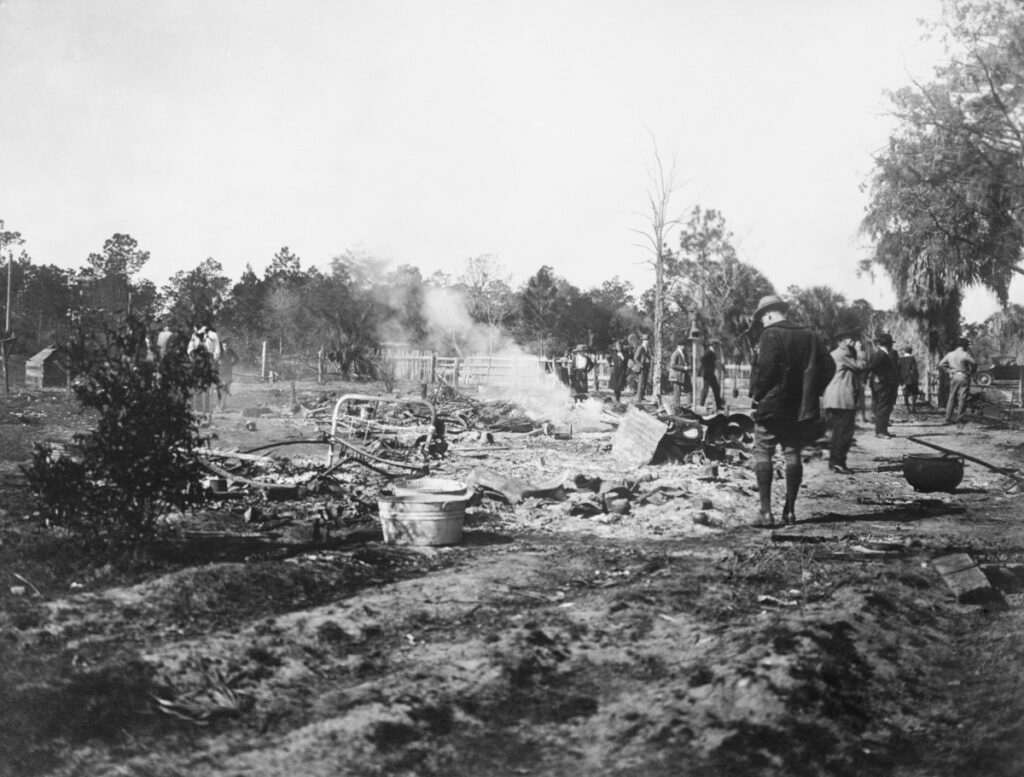 About 60 miles west of Ocala, down a lonely stretch of State Road 24, leading to Cedar Key, you will find a “blink and you’ll miss it” historical marker for the settlement of Rosewood. The area is desolate, bordered by a cypress swamp, slash pine, palms and tangled marshes. There are few dozen small houses set back from the road. Among the few commercial buildings in the area is a small white church bearing the name of Rosewood. From the looks of it, you might assume that this is one of those places where nothing very interesting ever happened. You’d be wrong.

That roadside marker, which was placed there in 2004 when Rosewood was designated as a Florida Heritage Landmark, tells the tragic tale of what was once a beautiful, thriving, predominantly Black community that was decimated in a scorched-earth raid by a bloodthirsty mob. While most markers of this kind repeat the same information on both sides, in this case it took both sides to capture what happened here. The tale laid out on the marker only scratches the surface of the story that is still evolving today—the next chapter of which will be written in Ocala this weekend.

The community of Rosewood was originally settled in 1845 by Blacks and whites, who had co-existed peacefully even amid the Black Codes and Jim Crow laws that fostered segregation in much of the South. The unincorporated town was reportedly named for the red cedar trees that were abundant in the area and the rose-like scent the wood had when freshly cut. Initially, the demand for the wood created a prosperous period for the residents. The cedar was cut in Rosewood and sent to pencil factories via a railroad station and small depot that was established in the town. Around 1890, however, the cedar tree population was decimated. Most of the white families moved away, some settling just a few miles away in the nearby town of Sumner, where the Cummer and Sons cypress sawmill was located.

By the 1920s, Rosewood’s population of between 200 and 300 was entirely made up of Black citizens who owned their own homes, established businesses, grew their own food on their farms and nurtured a familial community. The central white family that remained, the Wrights, operated a general store and continued to make their home there. Rosewood had several stores, a school, three churches, a Masonic Lodge, a sugarcane mill, a turpentine plant, a smokehouse and its own baseball team. Some of the residents of Rosewood also worked as laborers or domestic help at the homes of residents in Sumner.

The fate of Rosewood was forever changed on New Year’s Day of 1923, when a 22-year-old white woman, Fannie Taylor, alleged that a strange Black man had entered her home and beaten her. A recently escaped Black convict was assumed to be the man in question. The woman’s husband gathered an angry mob of white citizens and used dogs to track the culprit. This led them to Rosewood, where several men were accused of aiding and concealing the attacker.

Sam Carter was lynched by the men when he could not produce the runaway convict and Aaron Carrier was beaten and tied to the back of a car that dragged him along a gravel road back to Sumner in an attempt to get him to confess what he knew. Neither had any knowledge of the escaped prisoner. The sheriff then intervened and put Carrier in his car and drove him to Gainesville, where he was placed in protective custody and was treated by doctors for his injuries. Carrier’s aunt, Sarah Carrier, the beloved matriarch of Rosewood’s most prominent family, who worked as a laundress for the Taylors, then came forward to say that she had seen Mrs. Taylor’s assailant while at their home that day and that he was a white man who she had observed there before.

The theory that Mrs. Taylor was having an affair and used the claim of being attacked by a Black man has long been the prevailing notion and was widely reported. There is no record, however, that she ever recanted her story.

Sarah Carrier’s son, Sylvester Carrier, urged his extended family members to take shelter at her home, where he could protect them.

On the evening of Jan. 4, the mob had grown to around 30 men, who demanded that Sylvester give up the fugitive and surrender himself. Sarah tried to reason with the men from inside her home but was shot dead when the men blanketed the house in gunfire. The men advanced on the house, where 25 family members, mostly women and children were hiding. When the men kicked in the front door and attempted to enter, Sylvester successfully fended them off by killing two of the men and wounding four others. Once the mob had retreated, he was able to send the women and children out the back door to hide in the swamp.

Newspapers reported on the standoff, exaggerating the number dead and falsely reporting that groups of armed Black citizens had gone on a rampage. Even more white men poured into the area believing that a race war had broken out, including about 500 Ku Klux Klan members who were in Gainesville for a rally. Newspaper reports from the time say that the mob engaged in a “race riot” with lynchings, shootings, mutilations, burnings and mass graves, though in reality it was more of an extermination, with whites hunting Blacks mercilessly. The carnage lasted for seven days.

“Armed resistance by blacks was just unthinkable at that time,” R. Thomas Dye, a historian at Florida State University who studied Rosewood commented to the “Washington Post.” “That is why Rosewood was burned to the ground.”

Many of the women and children stayed hidden in the swamps and woods for days, while others had been concealed in the home of the white general store owner John Wright. Wright was able to convince John and William Bryce, two wealthy white brothers who owned a train, to pick up terrified women and children and take them to safety. Any adult men who made it out did so on foot.

On Jan. 7, the mob returned to finish off the town and burned everything that remained to the ground, except for the home of John Wright. All evidence of this once thriving Black community was wiped off the map. The surviving citizens did not even attempt to return for fear that the horrific bloodshed would recur.

The survivors lived in fear that they would be hunted down and killed because they were witnesses to the horrific events that took place and most never spoke about it, even within their own families.

According to the State of Florida, the official death toll was eight: six Blacks and two whites. However, the survivors believe the numbers on both sides to be higher, believing that at least 150 Blacks were killed. This was supported by interviews with some of the whites who witnessed the events.

The governor convened a grand jury and appointed a special prosecutor to investigate. Though the jury heard the testimonies of nearly 30 witnesses, who were mostly white, it was claimed they could not find enough evidence to pursue prosecution.

Following the initial news coverage, the story was virtually forgotten and rarely spoken about. In 1982, Gary Moore a reporter for the “St. Petersburg Times” began to investigate the history of Rosewood while on an assignment to write about Cedar Key. His “investigative expose” revived interest in the story and brought national attention through a series of articles in which he spoke to survivors, who had not been heard of since the events in 1923. That led to a “60 Minutes” special and stories by many other news outlets.
Seventy years after the massacre, in 1993, the Florida House of Representatives heard the testimony of the living survivors of the massacre, who demanded restitution from the state. Children at the time of the events, they were now in their 80s and 90s and were represented by a powerful law firm. One white witness joined them to testify on behalf of the victims.

The Florida Legislature went on to pass the Rosewood Claim Bill 591. It allocated $150,000 dollars of state funds to each to the nine living survivors who had come forward, approximately $2,000 each to their descendants of the families of Rosewood residents who lost their property and set up a program to allow descendants of Rosewood to attend college in Florida tuition-free. According to the “Washington Post,” between 1994 and 2020, 297 students have been granted Rosewood scholarships. The case is considered groundbreaking as the only time in history that a government, federal or state, has compensated victims of mass racial violence.

Several books were written about Rosewood, including one by Moore. A 1997 John Singleton film, simply entitled “Rosewood,” gave the events wider attention. Singleton, however, introduced several salacious fictional elements to the story that drew the ire of some of the survivors, not the least of which was a Black Rambo-esque character played by Ving Rhames. He also corrupted the character of white store owner John Wright, whom the survivors’ credit as an honorable man and a hero.

“If I made this film straight, docu-style, nobody would go see it,” Singleton said of the criticism.

The true history keepers are not the filmmakers or journalists, but the descendants. They are the only ones who can tell the stories of what followed the events at Rosewood. They are the stewards of oral histories. They know how their ancestors reinvented themselves and created new lives. But they also are writing the new chapters through their own stories. And they are doing it together. Since 1985, generations of Rosewood descendants have gathered together each year to not only keep a once-forgotten piece of history alive but to reconnect to the family and community ties that were once broken by violence and hatred. And they do it with a joyful spirit and excitement.

“We love to all be together,” said this year’s reunion host Bonnie C. Jones. “It’s a fun, positive time.”

The reunion will be held from the 22nd through the 24th right here in Ocala. The three days include a welcoming reception, banquet, brunch, worship service, a business meeting and family excursions.

The reunions are organized by the Rosewood Family Reunion, Inc. They maintain a private Facebook Group in order to stay in touch and also welcome any new family members who haven’t yet become a part of the group. Jones says they are always hoping to discover new family members they may not know about.

They have held reunions across the country, as the descendants now live in various states. But this year Jones chose Ocala as the site for the reunion because it is her hometown and she said other descendants have settled here as well.

Some of the other members are busy with other aspects of preserving Rosewood’s story. Efforts to establish a Rosewood historic area and memorial heritage park are being pursued by The Rosewood Heritage Foundation, Inc. The Real Rosewood Foundation (rosewoodflorida.com) is currently raising funds to have the Wright House, which was donated to the foundation for historic preservation, moved to a new site in Archer, in nearby Alachua County, where it will become a museum to honor the memory of the Rosewood survivors and descendants.

“We will protect and shelter the house, the same way the house sheltered the Rosewood survivors in 1923,” said Rosewood descendant Lizzie Robinson Jenkins.

Next year on New Year’s Eve Day will mark 100 years since the massacre at Rosewood and the families are already planning some big things for the centennial.