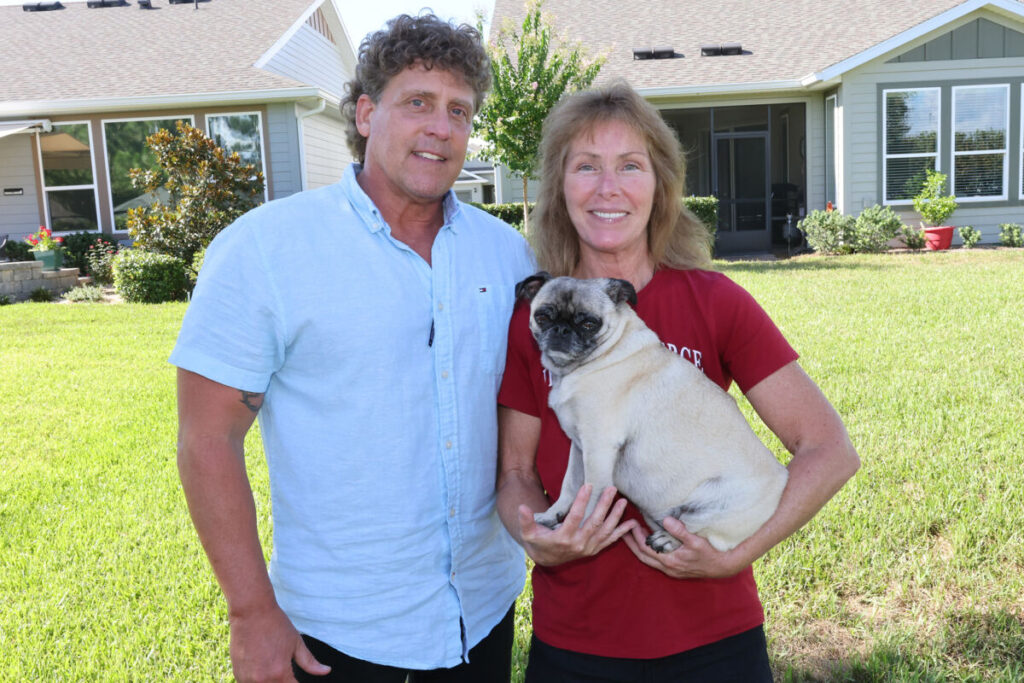 Hailing from the upper northeastern part of our country, Barry and Lisa Trudeau had dreamed of moving to Ocala for years. After vacationing in Florida, it became their goal to retire here. Circumstances took them on a winding road to get to Marion County, but it ended up being sooner than they thought.

The couple worked at the same company several times over the years, as they do today, but that path also was a bit complicated.

Barry was in construction work and decided to move to Florida to follow that trade. He lived on Florida’s east coast, near Vero Beach, for about 10 years, but found it unprofitable and returned to New Hampshire.

Lisa was employed at a company that manufactured circuit boards and Barry found work there, too, which is where they met. After they married, built a house and had a daughter, the circuit board company moved its interests overseas and the pair found themselves jobless.

Barry decided to try to get into the bio-tech industry, which manufactures medicines. He had applied to a firm and then the company had a hiring freeze.

“We struggled for a couple of years. It was a scary time for us,” Barry said. “We had a new home, a newborn baby, who was born during a difficult birth experience for Lisa, and both lost our jobs.”

They went from job to job, trying to make ends meet.

There were new hopes and starts, followed by disappointments, as new jobs were thwarted by layoffs and hiring freezes.

Lisa decided to go to school to become a licensed nursing assistant. With that credential, she secured a job with a home health care agency.

“I loved that job, and loved helping the patients,” she said.

Barry started classes at a community college and, after the first semester, was hired by the company that became Pfizer. Of necessity, however, he had to stop his classes. He worked for Pfizer for seven years, then again faced a layoff, as did Lisa three or four months later, after having been employed there for about six years.

Barry was then hired at Genzyme, now known as Resilience. During his two-year stint, he was able to help Lisa become employed there as well.

Barry left Genzyme to work at Lonza, another bio-tech firm, which was a closer commute. He worked there about eight years. Lisa continued at Resilience and has worked there for eight years.

One day, Barry was looking at a LinkedIn post on his computer and saw that an acquaintance had just started in a new administrative position in Alachua, Florida, at Resilience, the same parent company that employs Lisa. Barry “made the connection” and found the company was hiring. He had the required experience, so he applied, interviewed and was hired. He is now a manufacturing specialist for Resilience.

Lisa was able to transfer to Florida from her work with Resilience in New Hampshire, so her job continued when they moved here.

“Everything just came together,” Lisa said.

“It had to be a God thing!” Barry added. “There is no doubt about it.”

They put their house in New Hampshire on the market and it sold in one day. They found a house in Ocala and put an offer on it. One-half hour before the sale became final, they were outbid for the house and lost it. The one they live in now, in the Ocala Preserve area, became available and they bought it online, from New Hampshire, sight unseen. They are both pleased with the home.

They said it turned out to be perfect for them and their 6-year-old pug, Beanie.

Even though they have lived in Ocala only since May, they are very content here.

“We love the area. We wanted Ocala. From this area, you can get to anywhere you want. Lots of tourist places are close by,” Barry said.

Lisa added, “We will retire here. We never want to leave!”

“There is such a pleasantness here,” Barry continued. “There are lots of springs and a lot of history, too.”

The “amazing amenities here” attract the couple, both within their community and in the city, they said. Barry enjoys working out and sports in general. Lisa said she likes nature, the beautiful outdoors and the pool in their development.

They are happy here, they agreed, then added that there will be no “going back.”

They laughingly said they “are making a hobby” of visiting all the restaurants in the area.

The couple’s daughter, Marrysa, 23, lives in Portland, Maine, and is a quality control microanalyst.

“If we get hot, we can always go north to visit,” Barry said.