Percussionist Sean Thomas has Ocala drumming and dancing to a new beat. 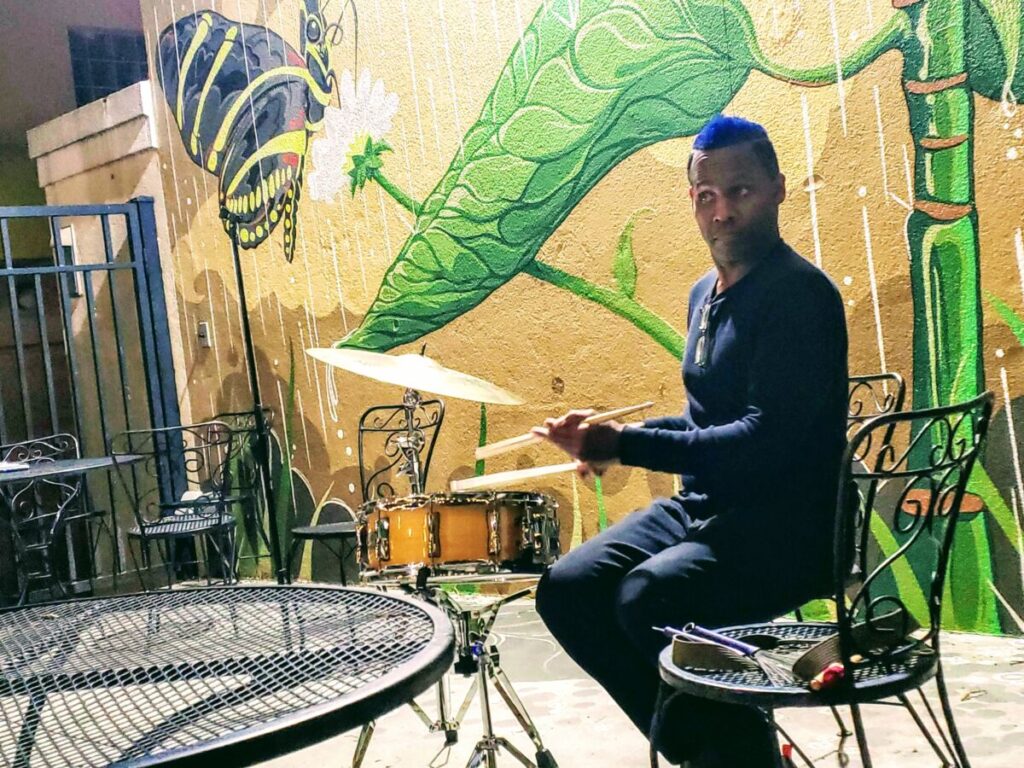 If you have visited downtown Ocala and happened upon drum circles with people dancing out in the open, there’s a good chance that Sean Thomas drummed up all the fun.

The professional percussionist and multidisciplinary artist has a knack for intertwining genres and is on a mission to get people to drum, dance and create their way out of their comfort zones.

Thomas, who does business as SeanTMusic Global, relocated to Ocala in 2018 from Brooklyn, New York, where he lived alternately between extended stays in his hometown of Curepe in Trinidad and Tobago. He settled in here while bucket drumming with the Boys and Girls Clubs of Marion County.

While Thomas won’t reveal his age— “Do we have to go there?” he asks cheekily—we can gauge that he grew up in the 1970s and ‘80s. His father made steel drums and he grew up performing with his dad and dancing with a troupe in Trinidad and Tobago.

“The steel band always had a problem with drummers, you know,” Thomas said. “We would have drummers come and sit in with us and they would be a part of the orchestra for a little bit and then they would leave. Eventually, I sat in on the drums and started playing, and then that led me to a two-year scholarship at the New England Conservatory of Music in Boston. I was among the first seven students selected to start the Thelonious Monk Institute of Jazz.”

While touring and learning with the institute, jazz heavyweights such as Herbie Hancock, Branford Marsalis and Wayne Shorter lent their expertise and influence to Thomas and the other youth in the ensemble.

“It was a really intense program,” Thomas said. “I studied with the great Max Roach and the great Alan Dawson, two of the best jazz drummers of all time.”

His experience with the ensemble enhanced the creativity he got from his dad and his father’s mother, Rufina Thomas.

“She is still with us,” Thomas said of his grandmother. “She was one of the first ladies who played the steel drums, which was notable because the steel drum was known to be an instrument for people who were illiterate. A lot of people didn’t want their daughters or sons, or what have you, to be involved in that movement.”

But Thomas, like his grandmother, has broken barriers and defied stereotypes, uniting street-playing and sophisticated jazz forms.

From 1998 to 2017, he spent most of his time back home in Trinidad and Tobago, a period that included the loss of his father and the birth of his son.

It took Arturo O’Farrill, a multi-Grammy-winning jazz pianist, composer and bandleader, to entice him back to the States.

“When O’Farrill performed in Trinidad, he and I talked about my getting involved with his organization, the Afro Jazz Alliance, in New York, to introduce steel drums,” Thomas said. “So, I was able to bring that to reality in New York with him. I did that for a little bit, then I came over to Ocala.”

Ocala, with its laid-back lifestyle and verdant backdrops, reminded Thomas of home and he has settled in happily, making connections across the cultural community.

Since coming here four years ago, he has made himself a prominent fixture at local events, adding beats to the poetry of Spoken Word Ocala, free weekly courtyard jams at the Marion Cultural Alliance’s Brick City Center for the Arts and spearheading a percussion-oriented event series at the Reilly Arts Center, among other happenings.

So, what does Thomas want us to take away from his open jams, such as the upcoming Techno Meets House event with Becky Sinn and DJ Idlemind at the Reilly’s NOMA Black Box Theater on July 23?

“Just to try and be holistic in your viewpoint,” he said. “There’s a whole lot of information out there. So, if you connect yourself to one type of information, you might end up being limited and rob yourself of the ability to grow.”