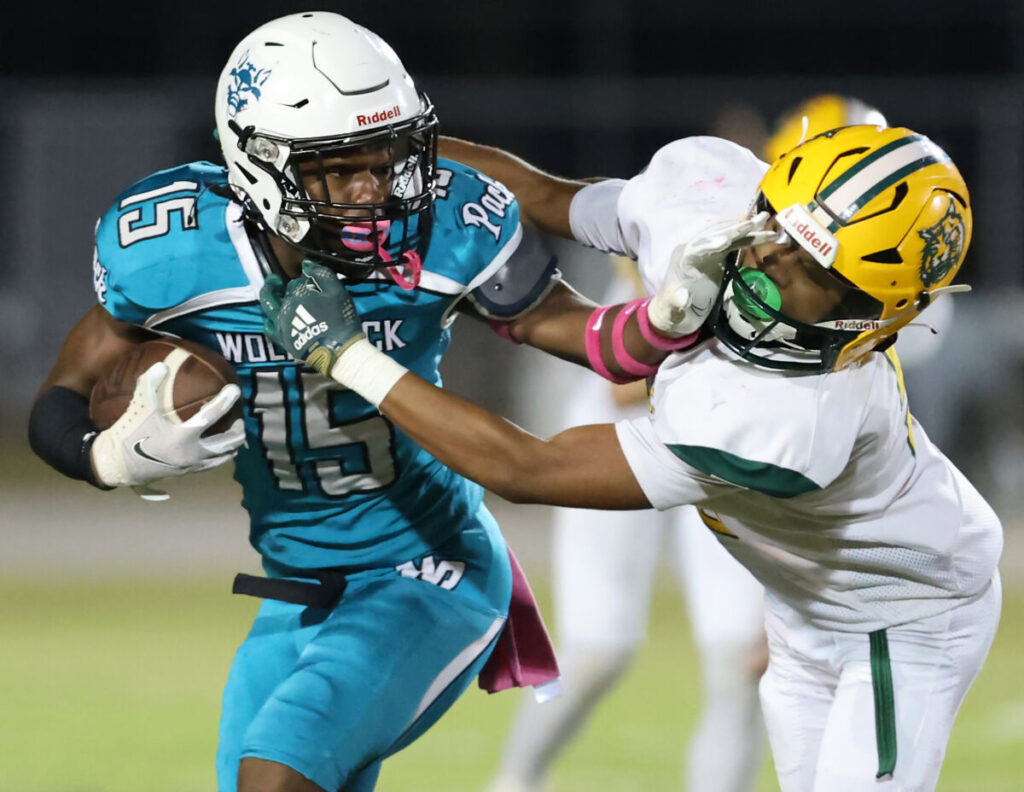 It was not the prettiest win for the Forest Wildcats, but it got the job done against the rival West Port Wolfpack on Friday night.

Both teams are led by first-year head coaches who have seen tremendous gains after both teams endured a combined record of 4-16 in 2021. With Forest at 4-4 coming in and West Port at 4-5, the winner guaranteed at least a record of .500 or above.

Accomplishing that feat has not been done by West Port since 2020 and 2017 for Forest.

The game got off to an inauspicious start for Forest as they fumbled the opening kickoff and gave the West Port offense great field position. West Port’s offense had a new starting quarterback for the game because the original starter, Brittin Stevens, was out with a knee injury and the backup quarterback moved out of county.

The scenario left West Port head coach Greg Harper with limited options, he would turn to senior defensive back Eli Graham to play the position. Graham has never played quarterback in a game in high school and made his first mistake on third down of the opening drive when he threw an interception to Forest defensive back Isayah Osbourne.

“I feel like we had a bit of a hangover from last week because we came out really slow tonight. We did not come out with the energy I wanted us to.” Forest head coach Eoghan Cullen said.

The third drive of the night for the West Port offense was fruitful as Graham connected with AJ Weaver for a 25-yard completion. An offsides penalty by the Forest defense, an 11-yard run by Graham and a 15-yard completion to Demetrius Brown put the offense in the red zone.

Graham would call his own number and grinded out the last 14 yards of the drive on three carries before plunging into the endzone for a three-yard touchdown to put West Port ahead 6-0.

“The kid did a great job, his teammates rallied around him and it’s good to see. I just wish we could have made a few more plays for him,” Harper said.

Vimel Poole and the Forest offense went into attack mode on the ensuing series and Poole would find a wide open Ryan Jackson running down the right sideline. The junior quarterback hit him in stride and Jackson was in the endzone with a 70-yard touchdown.

After Jackson’s touchdown, Forest kicker Colin Scroggie perfectly placed the kickoff in a spot where it was tough to West Port to get to and junior linebacker Cayden Pittman would recover the ball.

Three plays later, Poole connected with Matt Hart for a 25-yard touchdown, Hart had slipped by the defense and was all alone in the endzone.

West Port would not answer and had to punt but their defense stepped up when cornerback Kaiden Brown intercepted Poole and put his offense at the Forest 15-yard line. The drive got off to a bad start with a holding penalty and would end in a punt.

The remainder of the first half was scoreless and Forest had a 14-6 lead at halftime.

“I challenged the kids at halftime and told them we’ve got to pick it up. This is there senior night and they want it just as bad we do,” Cullen said.

The Forest defense would answer the call first when defensive tackle Timarius Mickens sacked Graham and forced a fumble. Mickens would pick up the loose ball and return it 25 yards for a touchdown to give Forest a 21-6 lead.

“It was great, everyday on defense we just practice, practice and practice on fumble recoveries. I blacked out and all I heard was ‘touchdown’,” Mickens said.

West Port could not answer, and Hart would come up with the second interception and third turnover of the night for the Forest defense.

The Forest offense were stuck in a tough position thanks to holding and false start flags. The two penalties made it third-and-28. The distance did not matter for Poole as he hit Jackson in stride down the left sideline for a 52-yard touchdown. Jackson’s two touchdowns combined for a team-high 122 receiving yards.

“VJ (Poole) is my guy and it was just on me to catch it, he will always put it there. It’s great having a quarterback lead us and throwing amazing passes,” Jackson said.

Forest, up 27-6 with about seven minutes left, decided to bring in backup quarterback Brooks Boutwell and the sophomore would connect with running back Amadrick Hope for a 14-yard touchdown to extend the lead to 34-6.

The Forest defense would get one more turnover via an interception and run out the clock on the win. Cullen was pleased with the result but said he worries that a slow start next week will be much harder to come back from.

Forest will face their archrival, the Vanguard Knights, and need a win to have a shot at an at-large bid for the playoffs. Cullen said his team will be ready and intensity will be on another level in practice.

“It’s going to be very detailed, there won’t be a lot of wasted time. We’re going to be moving and trying to get in as many reps as possible,” Cullen said.

Poole, who threw for three touchdowns and over 200 yards passing said that Vanguard is their biggest rival and they need to lock in at practice next week. One aspect of this season that has taught Poole a great deal is learning how to become a consistent leader that can be depended on when needed most.

“It’s a big step, they depend on me and go off however I am acting so I have to watch my emotions and keep them straight,” Poole said.

For West Port, a 4-3 start to the season had them feeling like the playoffs and setting the school record for most wins in a season was achievable. Unfortunately, Harper’s squad dealt with a ton of injuries down the stretch and lost their final three games to finish 4-6.

Although it is not the result his staff and team wanted, the three-win improvement is a step in the right direction for the program.

“Being a very young football team, it’s a step in the right direction. We just have to build off that, four is not what we wanted and I have a lot of upset guys in the locker room but winning and learning how to win is a process,” Harper said.

He continued: “Most of the time you don’t go from not winning to winning the state championship, it’s a process. We got to get in the weight room, get stronger and get better at everything we do.”

A majority of this team’s starters should be back in 2023 as they started nine sophomores on the offense most of the season. The defense is heavy with juniors and could continue to be a strength after posting four shutouts this season.

Forest is focused on the present and their matchup with Vanguard looms as they look to gain respect.

“It’s going to be a challenge for us, a really good challenge. We’ve been working and it’s time for us to come to the plate and show everybody what we’re made of because people count us out and don’t think we are good, so we have a lot to show,” Mickens said.