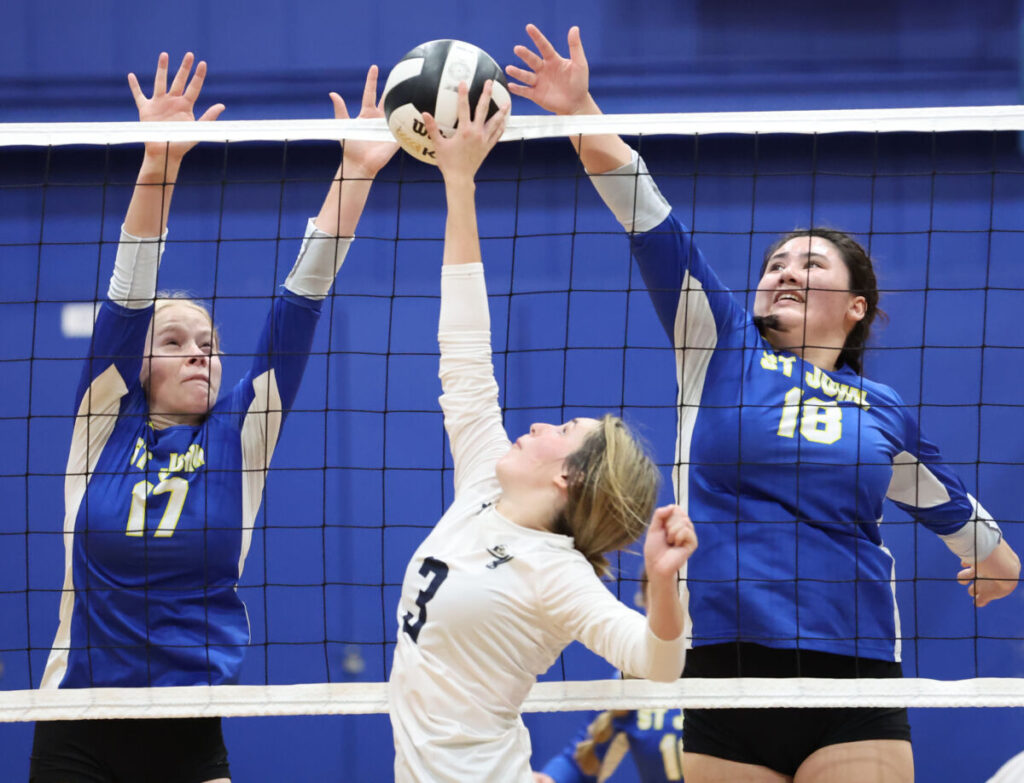 The St. John Lutheran Saints volleyball team took care of business on Tuesday night as they swept the St. Edwards Pirates (Vero Beach) in the first round of the Class-2A Region 2 Playoffs by scores of 25-19, 25-19 and 25-8.
St. John Lutheran entered the match on a three-game winning streak, which included the district championship match against Meadowbrook Academy. The first set was an even match from the start as they were tied at 11 before the first timeout. St. John sophomore outside hitter Sophia Ochoa had two kills in the opening moments of the game.
The Saints would finish the opening set on a 14-8 run, featuring kills from Ochoa and junior Giselle Baluyot. Players such as Baluyot, eighth graders Ashlyn Hallick and Lyla Huggins and junior Isabel Freeman all had to step up with sophomore outside hitter Rylee Palmateer out due to a knee injury.
The second set got off to a start that was similar to the first one as the team were tied at 12 before St. John finished on a 13-7 run, Baluyot had four of her seven kills and a service ace during the second set as her team grabbed the momentum.
“I just try to do my best, try not to let the team down and not get into my own head. Because once you do that, things can go down from there.” Baluyot said.
St. John appeared to carry the momentum from the previous set and jumped out to a 4-2 lead in the third set, but St. Edwards fought back to tie the game at 5.
Once again, the Saints would go on a tear and finished on a 20-3 run behind kills from Ochoa, Freeman, Hallick and senior setter Saylor Spears. Without Palmateer, the depth of the Saints showed up in a big way and head coach Brad Ewers thinks that can be an advantage moving forward in the playoffs.
“We’re young but they have a lot of volleyball experience. They understand that their strength is we can create different mismatches and see whoever has the best matchups. We see who is willing to step up and if we can continue to do that then we are going to challenge people to cover us all the way across.” he said.
One of the bigger beneficiaries that received more playing time and made play after play was Ashlyn Hallick. She was second on the team with eight kills and 10 digs.
“I was nervous at first, but I knew I had to step up and help my team win.” Hallick said.
Ochoa and Freeman were tied for a team-high nine kills, sophomore setter Ashley Downs led the Saints with 33 assists, Huggins contributed with 13 digs and three service aces and sophomore libero Payton Nazzari had a team-high 19 digs.
St. John will host the Brevard Heat (Palm Bay) on Friday at 7 p.m. For Ewers and his team, they are going to work hard the next couple days to be prepared for the tough matchup.
“We’ll be ready, we will come back in tomorrow and start prep. We will get focused on how to handle them.” he said.