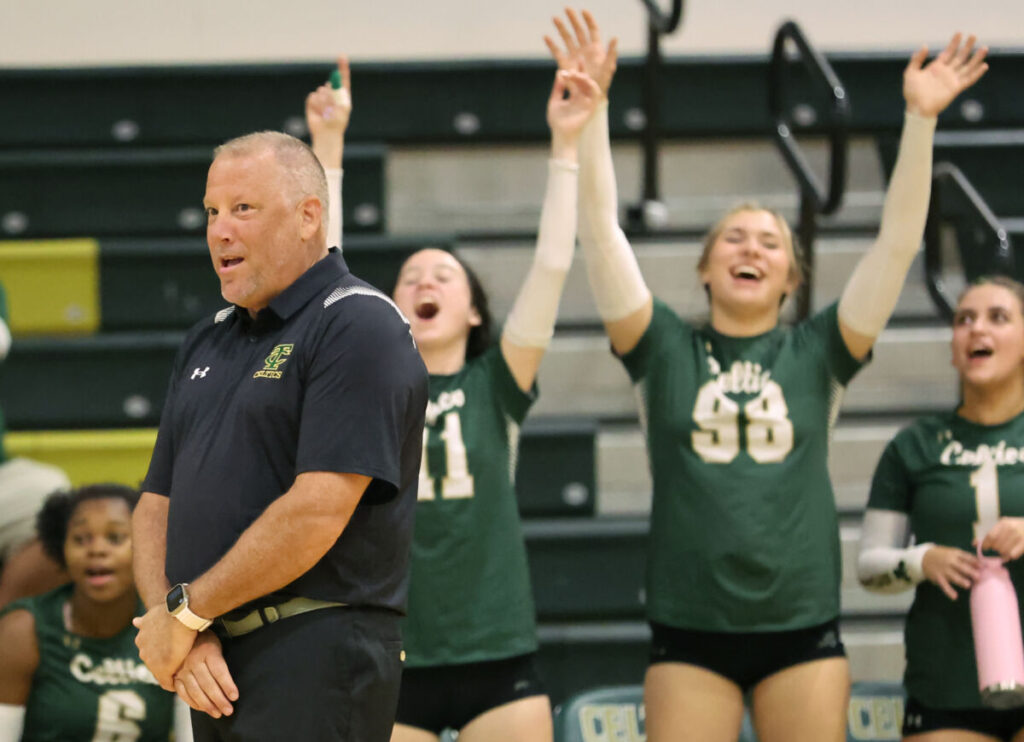 Having an explosive offense that’s capable of scoring from any place at the net gives Trinity Catholic a distinct advantage over most of its opponents.

“The most important thing right now is being able to compete and being able to come out and play hard the entire time no matter who is across the net,” said Trinity Catholic coach Jeff Reavis. “I thought we did a good job of maintaining a level of play tonight. Even when we changed, those other players went in there and did the same thing and that’s always a really good sign of what’s going on within your program besides just the kids that get to play all the time.”

Trinity Catholic, which won its 14th match in a row, utilized its superior height and athleticism at the net as Kiana Laborde, Amelia Fitzpatrick, Rose Gravel and Avery Campise took turns blasting kill shots past the smaller P.K. Yonge defenders.

“I think we’re really hard to scout because I don’t think you can take away one thing and it stops us,” coach Reavis said. “We’re going to make you honor us all and if you’re going one way we’re very happy going where you think the ball is not going.”

Trinity Catholic, the fourth-ranked team in the state regardless of classification, came out focused from the first point and jumped out to a 17-3 lead over P.K. Yonge (Gainesville), as Laborde had three of her match-high 10 kills, a pair of perfectly placed dink shots and a service ace.

P.K. Yonge senior Trinity Britt had two of her team-high six kills, but Trinity Catholic went on an 8-1 run and closed out the first set as Campise and Gravel combined for a block and a Blue Wave shot sailed long.

P.K. Yonge took a 1-0 lead in the second set before Trinity Catholic went on a 23-5 run as Fitzpatrick had two kills, Campise added a pair and Delaney Baker and Marisol Perez had service aces.

The Blue Wave continued to play hard and battle as Jorryn Dye had a pair of spikes that found the floor and Britt contributed a service ace.

But P.K. Yonge committed back-to-back errors to give the second set to the Celtics.

The Blue Wave jumped on top by a score of 2-0 in the third set before Trinity Catholic went on a 14-1 spurt sparked by Laborde, Fitzpatrick, Elayna Johnson and Hope Willis finding holes in the P.K. Yonge defense with well-placed shots.

The Blue Wave called a time out to try and stem the tide, but Trinity Catholic finished the set and match with a flourish, as Maddie Pozeg had a service ace and Maddie Hewitson drilled a cross-court spike for the final point.

“We’ve never had this much depth,” coach Reavis said. “There’s players that can come off the bench and help us a lot. We’ve always had great defensive players, now we’ve got a little more talent on the outside which is fun.”

Trinity Catholic will host Florida State University High School in a regional semifinal on Friday night. The Celtics did not play the Seminoles during the season. FSU will bring a 14-11 record into Friday night’s clash.

“We didn’t play Florida High during the season but I love to play anybody here,” coach Reavis said.