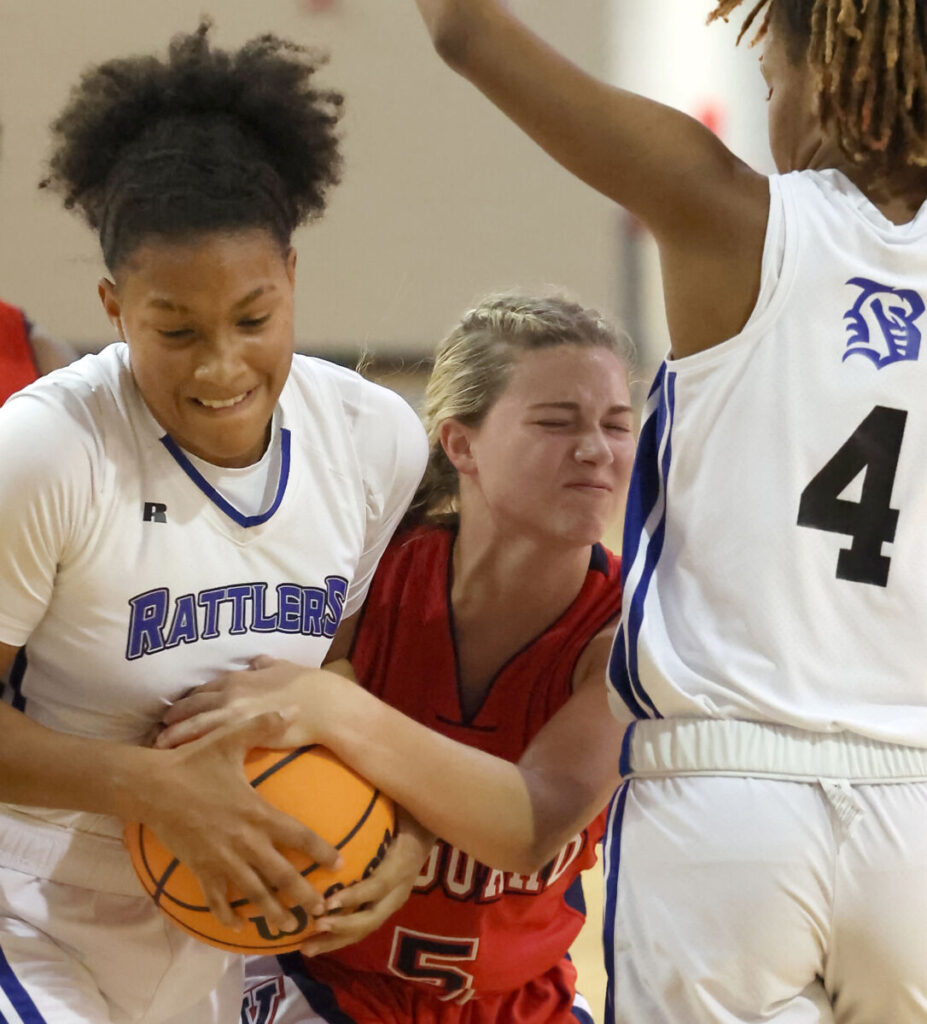 After losing their season opener by 26 points on Tuesday, Vanguard was looking to get into the win column for the first time in the 2022-2023 season. Meanwhile, Belleview was coming off a 34-point victory on Wednesday and were looking to keep the momentum going despite losing starting forward Aaliyah Armbrister to an ankle injury.

Vanguard got out to a fast start with a 10-4 lead after five minutes, freshman guard Kenaria Dowdy hit a three-point shot to give her team a six-point lead before the first timeout. Following the timeout, Dowdy would hit another three-pointer after a Belleview turnover.

Thursday night was only the second regular season varsity game for Dowdy, but her shooting skills are giving her early opportunities to make an impact. Vanguard head coach Terrance Lewis says the open looks for Dowdy are by design and she isn’t afraid of the moment.

“We got her fresh out of middle school and over the summer we learned she can shoot the ball. She doesn’t play like a freshman and she is willing to step up and take those key shots.” Lewis said.

Belleview got the deficit down to five points at the end of the first quarter but Vanguard’s senior captain Jyla Gunsby opened the second quarter with her first three-point shot. The second quarter for Vanguard featured a dangerous combo in Gunsby and junior guard Makiya Mitchell.

Mitchell was a menace on defense, pressuring whoever came up the court handling the ball for Belleview and made most of their offensive possessions a challenge because she would put pressure on at half court.

“That’s the game plan, every game from this game to our final game. Everything starts and stops on defense with #2 (Mitchell). She is the quarterback on defense, she makes the calls and adjustments.” Lewis said.

Mitchell and Gunsby combined for 13 points, five rebounds and three steals in the second quarter to open a comfortable 32-14 lead for Vanguard by halftime. Defense is a key point for Lewis and his team as they want to stay aggressive on that side all season long.

“We want to be aggressive every night, our coaches spend hours working with us on defense in practice.” Gunsby said.

The third quarter started slowly as a three pointer from Gunsby came almost two minutes into the quarter for the first points of the period. Belleview freshman Briyanna Miles and sophomore Aaliyah Grant both knocked down shots to give Belleview’s offense a little momentum in the third quarter.

Belleview senior Zakiya Scruggs scored six points and picked up two steals to bring the deficit down to 41-26 after three quarters.

The fourth quarter featured a variety of scorers from both teams as Gunsby, Mitchell, Dowdy and Kristen Moore all scored points for Vanguard. For Belleview, it was Grant, Scruggs and Miles doing the scoring as they fought to stay in the game to attempt a late comeback.

Despite Belleview’s efforts, Vanguard’s opportunistic defense and efficient offense were too much to overcome, and Vanguard would pick up their first win of the season by the score of 54-36.

Gunsby led the way for Vanguard with 12 points and seven rebounds to go along with a pair of steals. Mitchell finished with nine points, three rebounds and a game-high five steals, the impressive freshman Dowdy ended with 11 points and a rebound.

For Belleview, Grant was dominant at times as she led her team with 19 points and 12 rebounds. Scruggs was second in charge with 12 points and four steals. With Armbrister out, Greer gave more playing time to younger players and upperclassmen with little experience with the hope of it creating depth that is beneficial in the long-term.

“We got a lot of good minutes from younger players such as Adrianna Sosa and inexperienced seniors such as Kyla Clark and Simara Ramirez. We had a 24-hour turnaround to figure out what to do and come up with something that would be competitive and I’m proud of them.” Greer said.

Despite the loss, Greer has high hopes for his team as they move to 1-1 on the season.

“This could be one of the better teams we’ve had if we get everything together. It sounds weird after an 18-point loss but I truly feel we will be a good contender for districts.” he said.

Vanguard has lofty goals as well and this win is a step in the right direction as they look to get back to the district championship game after a one-point loss last season.

Belleview is off until Nov. 28, when they host Lake Weir at 5:30 p.m. Vanguard will be a part of the early-season shootout at North Marion on Saturday and are slated to play Trinity Catholic.