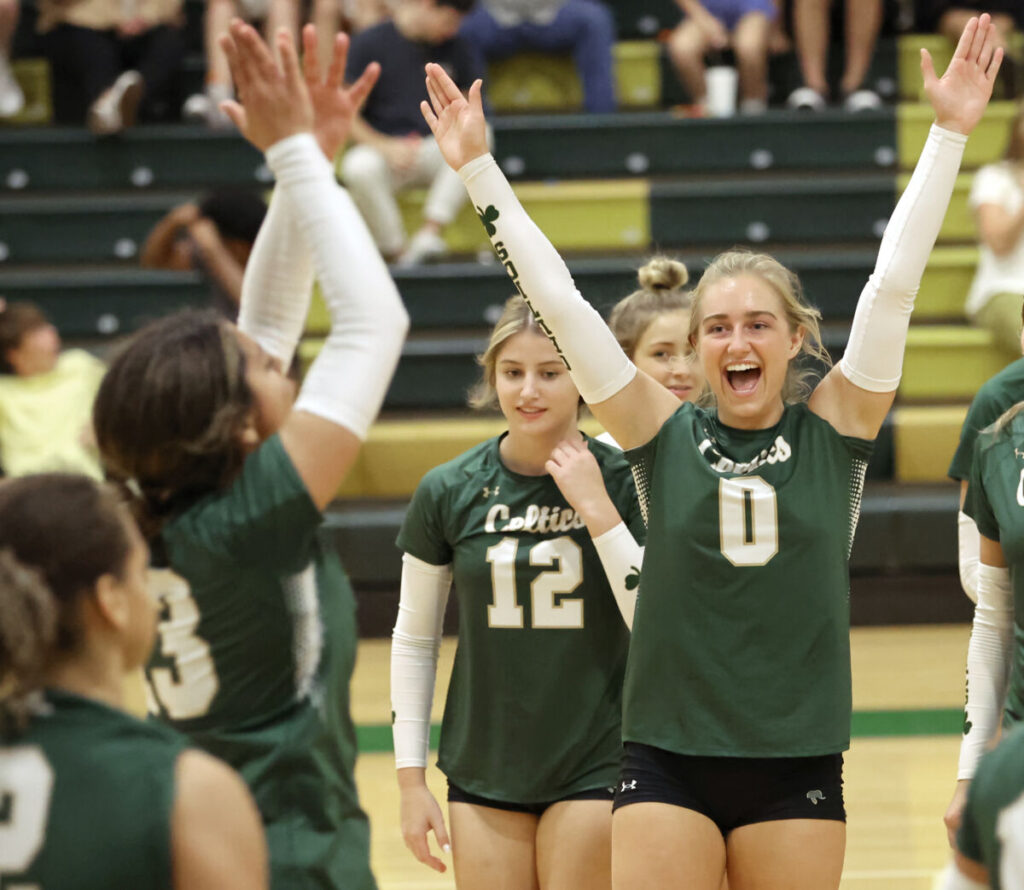 The Trinity Catholic volleyball team began its postseason journey with a workmanlike sweep of Master’s Academy by scores of 25-13, 25-4 and 25-15 in Tuesday night’s Class 3A-District 4 semifinals.

The win was its 12th in a row and improved Trinity Catholic to 19-3 on the season. The Celtics, the fourth-ranked team in the state regardless of classification, will host Trinity Prep (Orlando) for the district championship on Thursday night.

“We haven’t hosted a district anything in seven or eight years because no one would vote to come here so it’s really cool to play at home,” said Trinity Catholic coach Jeff Reavis. “We took care of business tonight and Thursday night there will be a quality opponent in this gym in Trinity Prep.”

An undersized Master’s Academy (Oviedo), which finished the season at 13-12, simply had no answers for the balanced offensive attack that Trinity Catholic presented, as junior Elayna Johnson had two kills and a dink to help the Celtics take a 16-6 lead in the first set.

Trinity Catholic continued to dominate play at the net as junior Rose Gravel and outside hitter Avery Campise hammered spikes past the Eagle defenders and senior Kiana Laborde had a pair of service aces to give the Celtics the 25-13 win.

Trinity Catholic played flawlessly in the second set and stormed out to a 12-0 lead as senior Ameila Fitzpatrick drilled a pair of winners and Laborde added three of her match-high 14 kills.

Master’s Academy finally got on the scoreboard as senior Kirsten Reeley drilled two of her team-high six kills. Trinity Catholic extended its lead as Emily Hurst and Maddie Hewitson teamed up for a pair of blocks and sophomore Delaney Baker had three consecutive service aces to close out the 25-4 victory.

The third set was the most competitive as Master’s Academy played well and enjoyed a 10-9 lead before Trinity Catholic refocused and went on a 15-6 run. Hurst was the catalyst with a service ace, two spikes and a block and Fiztpatrick added one of her seven kills to close out the set and the match.

Trinity Catholic played a very tough regular season schedule to prepare for postseason play. The Celtics, who didn’t play Trinity Prep during the season, will be tested by a talented Saints squad in Thursday night’s district championship game.

“Trinity Prep is a quality team,” Reavis said. “I’ve seen video of them and we have some common opponents, but they have to come here and we need to show up focused and ready to play.”