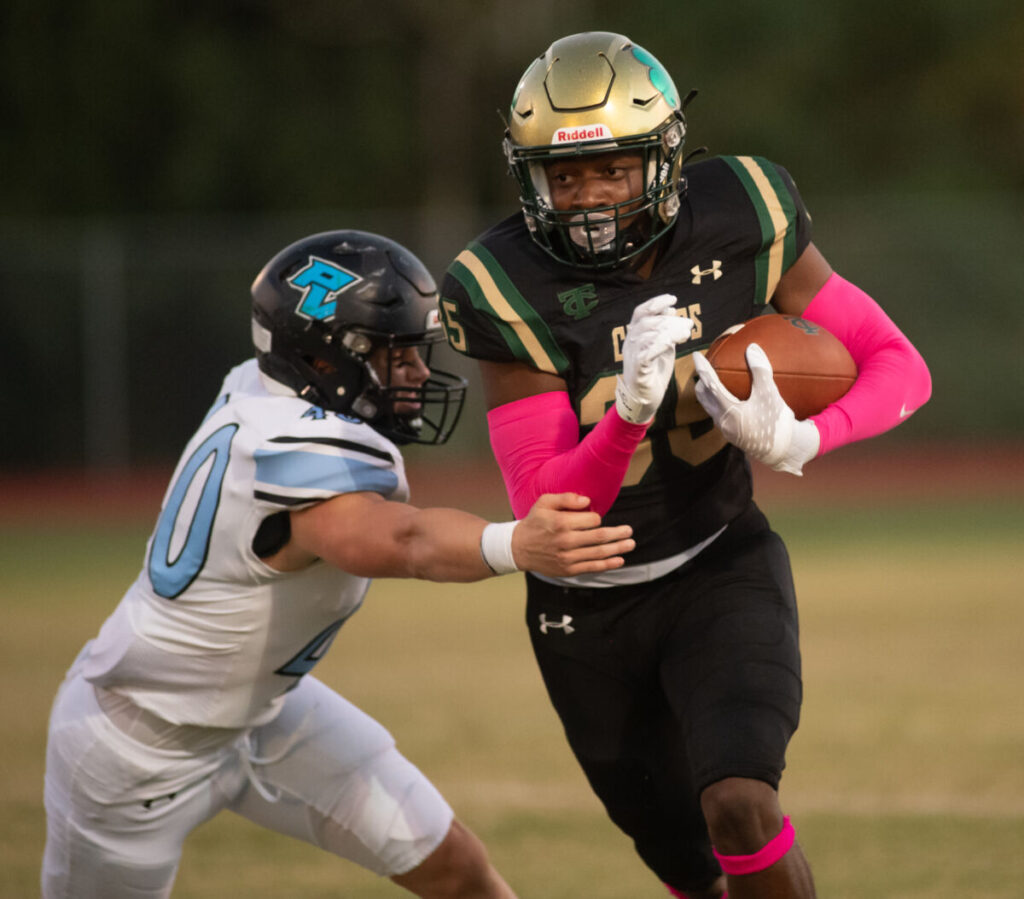 Trinity Catholic’s Mekai Griffin slips past the arm tackle of Ponte Vedre defender Maddux Babin after grabbing a screen pass Friday, October 14, 2022 in the first half of the Celtics’ senior night game at Dunlap Track & Field. (Photo by Howie McCormick)

The Trinity Catholic Celtics were coming off a huge home win versus rival Cavalry Christian last week and welcomed in the Ponte Vedra Sharks on Friday night.
Trinity Catholic jumped out to an early 7-0 lead on a rushing touchdown from running back Beau Beard.
Following the touchdown, Ponte Vedra tied the game with a touchdown within the first two minutes of the second quarter. Over the last five minutes of the first half, Trinity Catholic got two field goals from senior kicker Justin Arroyo and took a 13-7 lead into halftime.
Having a dependable kicker is an asset many high school football teams do not have, and Trinity Catholic head coach John Brantley II is always confident in Arroyo and long-snapper Harrison Holland’s chemistry.
“He’s been a real asset. He just learned about football two years ago and he’s a great kid. Has a great work ethic and it’s been fun to watch him evolve as a great kicker.” Brantley said.
Beard would score a 1-yard touchdown with four minutes to go in the third quarter to give Trinity Catholic a 19-7 lead. Brantley has had to lean on Beard many times this year as his staff breaks in underclassmen at the quarterback position and Beard has come up clutch time and time again.
“Beau Beard is our MVP, he’s had a heck of a year and he’s carried this team. Granted he’s got a good offensive line in front of him, but he’s been outstanding all year.” Brantley said.
With less than a minute to go in the third quarter, Ponte Vedra scored a touchdown to pull within five points.
“They (Ponte Vedra) have a good scheme offensively and they kept us off kilter in the second half. They have some good running backs and a solid offensive line. It’s a typical Coach Steve Price team that is well coached and they’re going to scheme up against you.” Brantley said
In the opening minute of the fourth quarter, Trinity Catholic sophomore quarterback Preston Wright may have had his big leadership moment as he connected with running back Brice Summerall for a 28-yard touchdown, Arroyo’s extra point extended the lead to 26-14.
Between Wright, junior Alan Means and senior Jake Engelhardt, it’s been a revolving door at quarterback this season for Trinity Catholic, but Brantley may have found his guy in Wright and is seeing progression every day.
“He’s jumped out there and evolved as our starting quarterback and he’s doing a great job. He handles the offense well and he’s been a good leader. I’ve been very happy with everything Preston has done.” Brantley said.
Ponte Vedra would answer back with a touchdown with six minutes left to play. Trinity Catholic would hold on to the ball and run out the remainder of the clock to hold on for a 26-21 win.
Despite the win, Brantley wants to see the defense be more physical if they plan on making a deep run in the playoffs.
“We’ve got to shore some things up on defense, we’re just not physical enough up front right now so we need to work and scheme up.” he said.
He continued, “Overall, they have played well this year but over the last couple of games it seems like it’s gotten away from us a little bit. We’re going to shore some things up on defense and if we can do that, we can take this team as far as they want to go.”
Trinity Catholic moves to 5-2 on the season and will face P.K. Yonge on the road for a chance at the 1-Suburban District 3 championship on Oct. 28