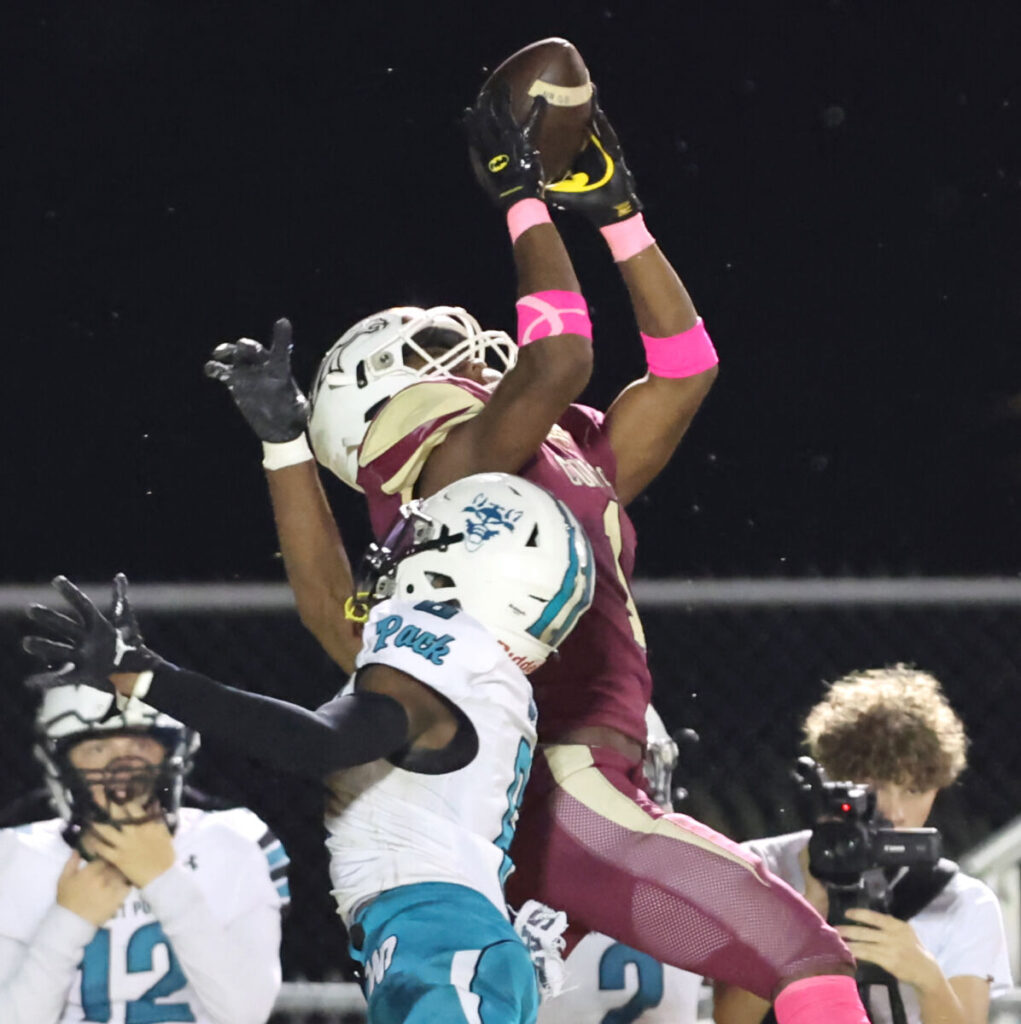 The West Port Wolfpack and North Marion Colts faced off in what was hyped as the premier matchup in Marion County on Friday night.

It took only six minutes for the game to become a one-sided affair as North Marion came out of the gates playing fast and energetic. On the third play of the game, Colts quarterback AJ Cussins hit senior wide receiver Chris Foster in stride down the middle for a 42-yard gain.

Two plays later, junior wide receiver Kenyon Stocker took the ball on a jet sweep and scored a 3-yard touchdown to give the Colts a 7-0 lead just two minutes into the game.

On the third play of the ensuing drive for West Port, a lost fumble that was recovered by North Marion defensive end Jordan McDonald led to a 37-yard touchdown pass to a wide-open Foster on the following play.

Chaos would ensue after Foster’s touchdown. West Port fumbled the ball away on the second play of the drive and on the next play, Cussins was intercepted by West Port cornerback Herman Washington.

Following the interception by Washington, North Marion senior linebacker Sariah Aviando would intercept West Port quarterback Brittin Stevens and would return it 21 yards for a touchdown.

“I went into 45, I read the quarterback’s eyes and I knew he was about to throw so I settled into the right spot and just locked in.” Aviando said.

Just six minutes into the game, North Marion had a 21-0 lead and complete control of the game. North Marion head coach Greg Carr knew the defense would bring extra energy after a social media post during the week gave his defense extra motivation.

“They seen the tweet and took offense to it. They wanted to come out and send a message tonight and I think they sent that message.,” Carr said.

The North Marion defense forced three turnovers in the first quarter and four total for the game combined with eight sacks.

The West Port offense could not respond and were forced to punt but the defense got a second interception off Cussins from senior Eli Graham. The momentum did not last long as Stevens and the offense had to punt again.

On the first play of the ensuing drive for the Colts, junior running back Mitch Brown sprung loose for a 37-yard run and Cussins would connect with Foster on an impressive 55-yard touchdown pass to extend the lead to 28-0.

North Marion defensive end Andrew Zock would terrorize Stevens on the following drive with back-to-back sacks and forcing another punt. The North Marion offense would grind out a 10-play drive that ended with quarterback/wide receiver Titus Williams faking a run to the left and throwing a jump-pass touchdown to Zock from four yards out.

With the lead going to 35-0, the running clock began and lasted for only 12 seconds as West Port wide receiver/cornerback Kaiden Brown returned a kickoff 80 yards for a touchdown.

Both teams would punt on their last drives of the half and North Marion carried a 35-6 lead into halftime.

West Port’s struggles continued as the offense started the second half by having to punt but the snap on the punt attempt was high and went out of the end zone for a safety. North Marion’s offense went three-and-out following the safety.

On the first play of the ensuing West Port drive, North Marion cornerback Dallas Richardson would intercept Stevens and return it 51 yards for the second defensive touchdown of the game for the Colts and extend the lead to 44-6 with six minutes left in the third quarter.

After Richardson’s interception, Stevens would hit a wide-open AJ Weaver for a 70-yard touchdown, the longest play of the night for West Port. West Port head coach Greg Harper was disappointed with the result but happy that his team continued to fight despite the big deficit.

“I always love our football team, they fight, and they keep trying to play ball. Some nights you just can’t get things rolling but those kids continue to play and try to make plays.” he said.

The remained of the third quarter and majority of the fourth quarter was filled with sacks from both defenses and punts from the offenses. With just over a minute to play, Cussins would toss a 50-yard touchdown down the left sideline to Elija Walton to put the finishing touches on a 51-12 win.

Ten days ago, North Marion had suffered their second consecutive loss at home and had scored a combined 13 points. The past two Friday’s have been a huge shift in momentum for North Marion that has led to two wins over county rivals.

Foster feels like the win over Vanguard last week and Friday night’s win over West Port is the start of a special run for his team.

“Vanguard was a very tough game, but I feel like once we won over our rivals, everything is going to be uphill for us. Suwannee and Eastside were setbacks that set up for a major comeback.” he said. Foster led North Marion with seven receptions, 156 yards and two touchdowns.

While the receiver group for North Marion has been productive, no one can deny how dominant the defense has been this season as they have not allowed more than 17 points in a game.

With the offensive struggling in the previous losses, it was vital for that side of the ball to get off to a quick start and allow the defense to pin their ears back and force heavy pressure on the opposing quarterback.

It was a difficult loss to swallow for West Port, but Harper was adamant that they will bounce back and expects nothing but great effort from his team as they prepare for a district game against East Ridge (Clermont) next Friday.

“We got to live and learn; we have a young football team. We’re going to keep getting better and hopefully next time we’ll be on top. Hopefully, we can get healthy with a big district game next week. They will respond, they always do.” he said.

North Marion was eager to continue the momentum from last’s week win and Carr had no complaints about his team’s performance.

“Just a good win for the team, we wanted to come out and make a statement and understand that this was just another stride in the right direction of where we’re trying to go and what we’re capable of doing.”