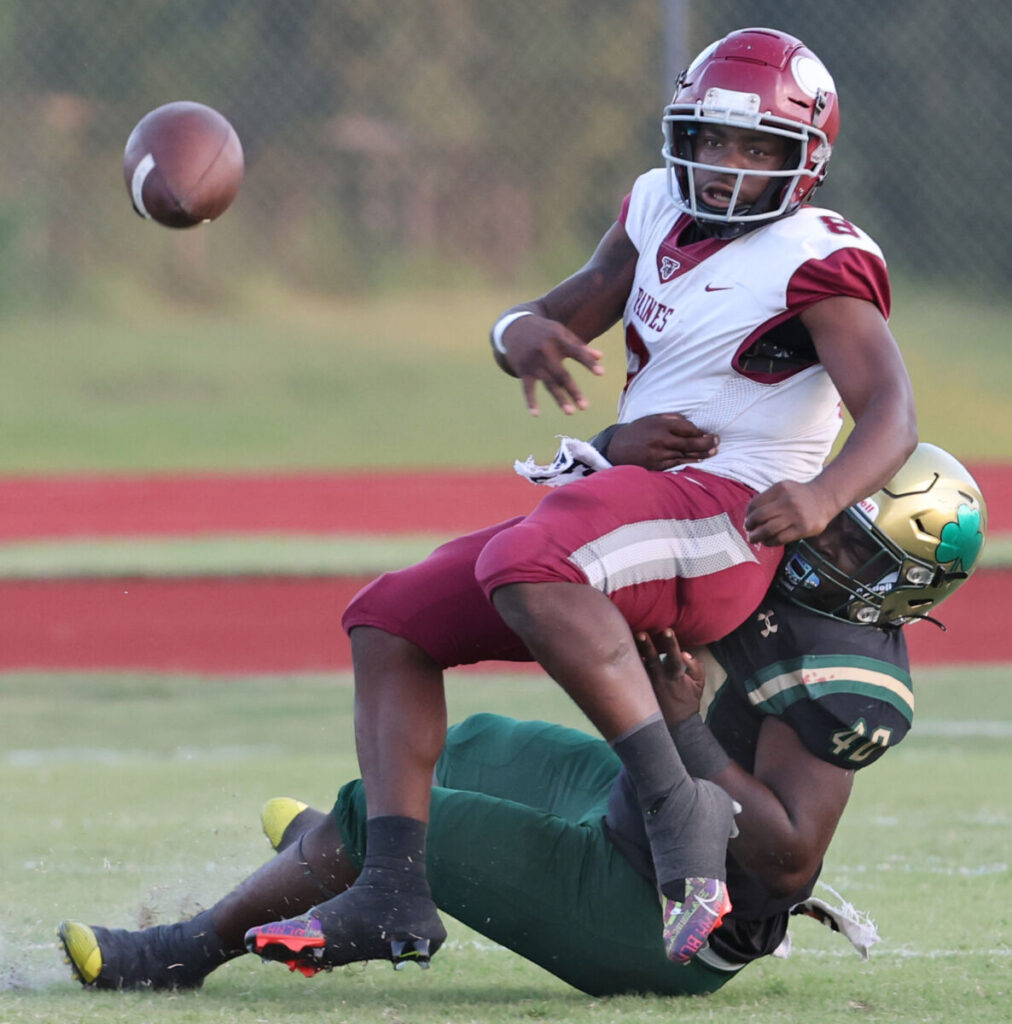 It was one of the premier matchups for high school football in central Florida on Friday night as the Trinity Catholic Celtics hosted the Raines Vikings from Jacksonville.

Both teams were coming off a bye week and looking to move to 3-1 on the 2022 season. The weather had a hint of fall in the air as it was a gorgeous 79 degrees with a slight breeze at Dunlap Field. The opening minutes of the game resembled a rainy, humid Florida day as the Vikings were hit with a delay of game penalty on the opening play.

A 20-yard pass completion to senior wide receiver Tadarius Devoe preceded a holding penalty that forced the Vikings to punt. On the snap, junior punter/linebacker Jaylen Clark dropped the snap and Celtics junior defensive back Jeremiah Rhem would recover the fumble amidst a melee of players at the 4-yard line.

Despite the superb field position, the Celtics could not punch it in on first or second down and an ugly handoff exchange on third down between quarterback Alan Means and running back Beau Beard led to a fumble that was recovered by Vikings junior cornerback Nicholas Kilpatrick.

The mistakes continued to pile up as Raines was called for a false start on first down and the drive ended in a punt. On the punt, the Celtics fumbled the return and Raines ended up with the recovery.

The Vikings offense got their first bit of momentum on a 12-yard run by running back Sincere Cohen and an 8-yard run by running back Nyle Allen. A holding penalty put their offense in a tough a position and on decided to go for it on 4th and 20 at the Celtics 25. Raines quarterback Roman Doles rolled out left and Rhem would come up with the interception and raced down the sideline for an 82-yard interception return for a touchdown, the extra point gave the Celtics a 7-0 lead.

“That play was a broken play where the quarterback rolled out and I knew that I needed to cover somebody. I saw the ball coming right to me and as a receiver (Rhem plays both offense and defense) I knew that I had to go and get it and take it to the house, my teammates made some great blocks for me.,” Rhem said.

Following the interception, the Raines offense went three and out and the Trinity Catholic offense turned the ball over on downs. After the stop on the previous play, Doles found Devoe open down the right sideline for a 39-yard gain, which set up a 1-yard touchdown run for Cohen, the extra point was partially blocked, and the Celtics kept a 7-6 lead.

On the ensuing drive for the Celtics, Beard grinded out runs of 14 and 8 yards but on first down at the Vikings 35-yard line, pressure forced Means to his left and Raines cornerback Kenton Kirkland intercepted his pass near the sideline.

The remainder of the first half featured a couple of punts and sophomore Preston Wright coming in at quarterback for the Celtics. Even with all the mistakes, Trinity held a 7-6 lead at halftime.

The Celtics started the second half with a fourth down conversion on a fake punt and Beard had four carries for 38 yards to set up an 18-yard field goal for senior Justin Arroyo to give the home team a 10-6 lead midway through the third quarter.

The Raines offense came to life as Cohen had three carries for 30 yards on a drive that ended on a 9-yard touchdown run by Doles, the quarterback ran in the two-point conversion to give the Vikings a 14-10 lead.

The Celtics were given a short field after a personal foul penalty on the kickoff return and Beard took the lead back with a 7-yard touchdown run to give his team a 17-14 lead at the end of the third quarter.

Beard was the workhorse of the Celtics offense and finished with 25 carries for 115 yards.

“Coach told me to play hard and sometimes you have to put the team on your back and play as hard as you can. If my teammates see me playing hard, they will start playing hard and be motivated.,” he said.

Following Beard’s touchdown, both defenses forced a punt and Raines got the ball back at midfield with 9:04 left in the fourth quarter. After a first down by Allen got the ball to the Celtics 39-yard line, the Vikings offense stalled and were forced to punt.

While lining up for the punt, the Celtics had issues with players coming on and off the field and Clark saw a bevy of open field on the left side and took off for a 44-yard touchdown run where he dragged two defenders the last couple yards for the go-ahead touchdown with 6:45 left in the game.

“I saw nobody was over there and I saw a chance and did what I had to do. Big-time players make big-time plays in big-time games. I’m just thankful it paid off.,” Clark said.

Now up 20-17, the Raines defense had to hold on. Beard would rush for 15 yards on the first play of drive, but the Vikings defense held off and senior linebacker Jamari Whitehead came up with a huge sack on fourth down.

Raines head coach Donovan Masline has faith in his defense and knew he could count on the group when needed.

“I didn’t say anything to the defense, they know what it is. We hang our hat on the defense.,” he said.

The Vikings got the ball back with 4:16 left on the clock and would get a 23-yard run on third and nine from Doles to seal the 20-17 win. The win moves them to 3-1 on the season as they head home to face Riverside next Friday.

Trinity Catholic head coach John Brantley II took the blame for the miscommunication on the fake punt-turned-touchdown that gave Raines the lead and said they will get it cleaned up in practice next week.

Despite the loss, Brantley is optimistic about his team and is looking forward to the tough battles ahead.

“We have work to do, mid-season report card is a B-minus and we have a lot of room to get better. I have a lot of respect for the Raines program, a lot of good athletes that play hard and that was a good test for us at the mid-season point.,” he said.

The schedule does not get any easier for the Celtics as St. Joseph Academy and Calvary Christian come to Dunlap Field the next two weeks. Brantley and his team welcome the competition as they are always looking to play good teams.

“That’s what we hang our hat on, is to play good competition. That’s why these kids come to Trinity Catholic and that’s why we’re going to challenge them each week.,” he said.

He added, “That can only help get you to this level of competition in the playoffs. I’m discouraged by the outcome of the game but looking forward to the future with this football team.”